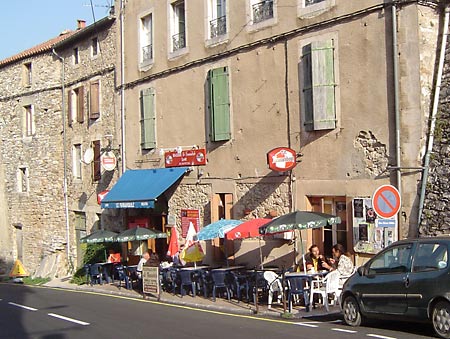 I REMEMBER a long, hot August afternoon about 30 years ago, somewhere in the Lot or Dordogne départements, on holiday with the family. Thirst drove us to a café, and at that time we didn't know the difference in France between a café and a bar (there's none) and that very often a café/bar is referred to as une terrasse, if it has an outside sitting area.

Tongues hanging out, we found this terrasse in Gourdon or Gramat or Les Eyzies (I can't remember where exactly) and tried to find seats in the shade. So naïve was I that I didn't realise that if you plonk yourself down in a bar/café/terrasse someone eventually will come and take your order, someone you mustn't ever call 'garçon' because that's quite disrespectful in this context. I went inside and up to the bar to place our order, and just as I was going in someone came out carrying a tray of drinks for another party. On the tray were tall glasses of something pinky-orange or bright green, looking deliciously cool, and I thought that was exactly what was needed to slake the family thirst.

I reached the bar and found to my anguish that the French for 'I'd like four glasses of whatever it was, those pinky-orange and bright green drinks, I'm sorry, I don't know what they're called, that the previous customer was carrying out just now' had totally deserted me. I had to take the coward's way out, ordering the utterly conventional Cokes or Oranginas. We finished these quickly, ordered another round, paid up and continued on our mission, probably to buy those disgusting flypapers that we would hang up at strategic points in our gîte. We hadn't yet learnt that to keep a house cool and fly-free in high summer you should shut all the doors and all the windows and shutters during the day, only opening them at night. Or maybe we went to peruse estate agents' windows, hardly believing that rural property prices could be so low, and saying to each other 'just suppose . . . what if? . . . we could sell our house fifteen times over for that . . .' Ten years later we did exactly that.

But today's news is that I can now reveal to you exactly what those drinks were, and it's probably just as well that my then very rusty French took French leave when it did. The basis was pastis, and if you've never come across pastis I do congratulate you because you've got such an interesting discovery coming your way. Pastis is a 40-45% alcohol spirit flavoured with aniseed and a little sugar and sometimes herbs. In the bottle (Pernod, Ricard and 51 are leading brands) it comes as a clear dark yellow liquid. It's drunk diluted with cold water in the minimum ratio 5:1, and the addition of water has the curious effect of turning the pastis into a cloudy, milky, white-ish liquid. A bit like some disinfectants, but there the resemblance ends. Its other leading characteristic is that, like baguettes or tomatoes, somehow it never tastes the same outside France. You can add other flavourings, especially fruit and plant extract syrups.

They've got popular names, these drinks. What I propose to do now is to give you the Campbell's Diary Drinking Guide, a select list of drinks that are mixes of this and that, together with their popular names. Next time you go into a bar/café/terrasse you needn't be caught out, as I was, and gasps of admiration for your savoir faire and sophistication will pass among the regulars.

Then of course there are the barman's jokes:

WE'VE GOT two cafés/bars/terrasses in the village. There are photos of them at the head and foot of this article. The one at the top is called, for some reason, Le Funambule. This means The Tight-rope. The terrasse consists of a few tables and chairs on the pavement. If you want to pass you have to step into the road. This is where the professional village drinkers gather. I don't think they go in much for the fancy stuff I've listed up there: mostly they'll ask for un jaune, a yellow, meaning pastis. It will be served neat in a small glass, with a carafe of water. The usual toast is Santé! (Health!) or Tchin! (Chin!) or sometimes they just touch glasses without saying anything.

At the other end of the village (and of this article) is the Laissac. This is a grander affair, boasting a hotel and a restaurant, although they serve dishes like steak and chips at the Funambule. It was built back in the days of the railway, towards the end of the 19th century, to serve as a station hotel. It has the reputation of never having changed its menu since then, but I'm sure that can't be true. It's the headquarters of the village football club.

Josephine and I sometimes patronise the Laissac, and it's very pleasant to install ourselves on the much broader terrasse and watch village life go by. There's never any hurry. A glass of lager, Coke or Orangina, coffee, un jaune or simply un jus de parapluie entitles you to sit there from dawn till dusk, if you want. Would you like to join us? We'd be glad of your company, but if you're thinking of buying a round of drinks, I'd rather not have un cercueil, if you don't mind. Not just yet.