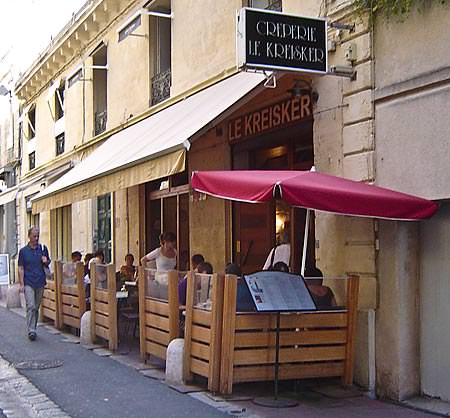 CRÊPES! CRÊPES! Crêpes! - and don't forget that little hat on the first E: crêpes just wouldn't be the same without it. They wouldn't have the same flavour at all. Pas du tout.

(The little hat - its Sunday name is 'circumflex' - shows that once upon a time the E or any other vowel was followed by an S. Circumflexes are quite common in French, but somehow the missing S has survived in English: if ever you're flummoxed by words like honnête or mât or hôte, you've only got to remember this little wrinkle and you shoot to the head of the queue, leaving Google translators standing, scratching their heads in puzzlement: honnête means honest, mât means mast, hôte means host, and so on. Eây peây.)

Oh dear. Once a teacher, always a teacher. Who can blame you for being much more interested in gastronomy than philology, in eating crêpes than accounting for their name? But bear with me a moment longer, just while I tell you that crêpe derives from the Latin crispus, meaning - but you've guessed, haven't you? And now we can really get on with the story. Thank you for reading so far, if you have.

We go to Montpellier once or twice a month. It's fast becoming a big city, one of France's most significant. It will be some time before it eclipses Marseilles as the premier city in the south of France, but its growth is phenomenal. It's an ancient city. In the early middle ages it was famed for its medical school, and indeed the main Montpellier teaching hospital is named after Guy de Chauliac, a great medieval physician. And it's for medical reasons that we go to Montpellier, a 90-minute drive from our village, so often: a highly-regarded acupuncturist practises not far from the hospitals.

I never heard of anyone starving to death in Montpellier, and it's not surprising: there are restaurants great and small all over the city, as though scattered from a pepper-pot. Turkish, Creole, Vietnamese, Egyptian, Greek. Indonesian, American, Indian, Japanese, Australian. Yes, Australian. Italian, Belgian - but you get the picture. There's a notable absence, to the best of my knowledge: British pubs there may be, but there's no British restaurant. For all this cosmopolitan choice we almost always end up at lunchtime in a narrow city centre street called Passage Bruyas at an unassuming crêperie called Le Kreisker.

I thought nothing of this name until, driving through Brittany a year or two ago, I saw the word kreisker on signposts. It was so common that I guessed it had to mean town centre. Where other regions of France have signs saying Centre Ville, in Brittany they express their independence and pride in their own language by writing it in Breton. It's pronounced 'cress-care'. (The 'ker' bit is the same as Car or Caer in Welsh, a linguistic cousin of Breton. But your mouths will be watering.)

The best crêpes in France - in the world, for that matter - come from Brittany. At Le Kreisker in Montpellier la patronne, Madame Caroff, does her best to promote her native Brittany. On the walls of her town-centre crêperie are all things Breton. A set of bagpipes. (Bagpipes? Oh yes, bagpipes are very popular in Brittany. It must be the Celtic influence. They're not quite as piercing as the Great Highland Bagpipe, but almost every town in Brittany has its bagad, its pipe band.) A round felt hat, black, broad-brimmed, beribboned and traditional. A Breton I used to work with told me once that Chapeau rond, Round hat, was a common nickname for a Breton, just as you might refer to a Scotsman as a Jock.

Some of that attractive and very characteristic faïence from Quimper, mostly plates decorated in blue and yellow on a white background, some showing Breton peasant scenes, the best of it signed 'Henriot, Quimper'. And there are photos of Bretons in traditional dress, paintings of Breton scenes, a pair of Breton clogs and so on.

But for me easily the best advertisement for Brittany are those wonderful crêpes. They're made from buckwheat flour, so they're not in the least stodgy. In fact they're deliciously light, and without being crunchy (although sometimes the edges crackle enjoyably in the mouth) they respect their derivation pedigree from the Latin crispus. The basic pancake is made from a buckwheat flour batter made on opening up in the morning, and left to stand and prove until midday, when the first customers of the day start to arrive. We always book an hour or two in advance, because there are very often queues.

There's an immense variety of fillings, both savoury and sweet. Real crêpistes - if there is such a term: I've just made it up - will have both, maybe a savoury crêpe filled with sardines and tomatoes, with a side salad, to start with. They'll maybe follow this with a sweet crêpe, made of wheat flour, so more like a Shrove Tuesday pancake, filled with chestnut cream or home-made apple purée with a generous dab of whipped cream. Traditionally, they're served with another Breton speciality, cider. My usual order is for Tiercé tomate (ham, cheese, fried egg and tomato) while Josephine usually asks for Thon, épinard, crème fraiche (tuna, spinach, slightly soured cream).

Neither of us has ever dared go for a sweet crêpe to follow.

The last time we indulged ourselves at Le Kreisker I asked Mme Caroff about the menu cover, which has a drawing of a very tall and slender church spire, very different from the stubby, truncated towers we get down here in the Midi. She said it was the church spire at St Pol de Léon. Did I know it? I thought for a moment, and then said Oh yes, it's a town near Roscoff. As indeed it is, a town you probably by-pass, disregarding signs that say Kreisker, because you're anxious to head south as fast as possible as you come off the Plymouth ferry.

Did we know Roscoff? she asked. I suspect it's her home town, I think she was willing us to say yes, it's an amazing place, where the Roscovites are as handsome as they are benevolent, as open-handed as they are open-hearted, as hard-working as they are laughter-loving. But we had to say we'd only been there once, when we had a couple of hours to spare before boarding the overnight ferry. Did we eat there? she asked. We did, but we couldn't remember where, except that it was a place full of Brits which, love my fellow-countrymen though I do, I always find a bit hard to swallow. Unlike Mme Carrof's crêpes. Nor could we remember what we ate, but it certainly wasn't crêpes.

Ah, she said, the next time you're in Roscoff you must go to La Crêperie de la Poste. I expect we will, but in the meantime we'll continue to gorge ourselves on Mme Caroff's delectable plenty. Often. But I pass on her recommendation for anyone finding themselves at a loose end and with an empty tum in Roscoff.

Here's Le Kreisker's crêpe-maker. No, it isn't Mme Caroff: she serves, in between preparing the surprisingly modest bills. This lady's name? I don't know, but at a guess it has to be Suzette, doesn't it?