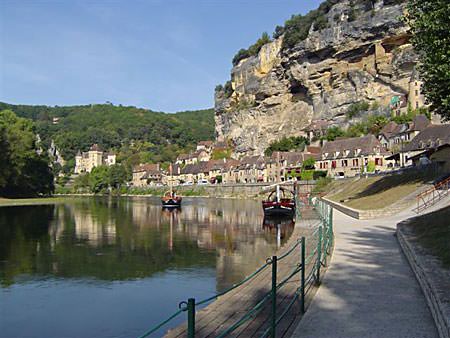 'DID YOU know,' I said to Josephine, 'that there's a small area of London that has an Occitan name?'
'No,' she said.
'I mean,' I prattled on, 'there's this language, Occitan, that no one in the south of France speaks as their mother tongue any more, except maybe a few very elderly people, so to all intents and purposes it's dead, like Cornish. And yet an Occitan word has given its name to an area of London. Don't you think that's extraordinary?'
'Not really,' she said. 'What is it? Convince me.'
'Castelnau,' I said. 'On the south side of Hammersmith Bridge. It's part of Barnes, really. In Occitan it means 'high castle'. Castel means castle, obviously, and nau, sometimes naut or naud, means high.'
'Are you sure? Doesn't it mean 'new castle'?'
'Nope. High castle. Quite sure.'

Gabares on the river Dordogne. La Roque Gageac on the right.

Some days after this conversation we spent a day in the Dordogne, taking a break from the long car journey from home in the Deep South to the Channel, on the way to spending a couple of weeks in the UK. It also happened to be Josephine's birthday, so we looked about for something special to mark the day. It was a perfect late summer day, too good to waste sitting in the car or skulking about indoors, so after a leisurely breakfast in the sun we made for the village of La Roque Gageac. La Roque Gageac lies on the river Dordogne, mostly sheltering under a steep cliff. Indeed, some of the older houses are actually built into the rock.

Two rival companies offer boat trips, one heading upstream and the other downstream. They call their boats gabares. An upstream gabare was due to leave immediately, but we refused the blandishments of two ladies waving prospectuses at us out of their booking office window and went for coffee instead. I mention this only to observe that while no Occitan was being spoken on the café terrace, precious little French was either: the entire clientèle appeared to be English. So we drank our coffee and embarked on the downstream gabare.

Originally gabares were their own cargo. The Bordeaux wine trade needed wood for barrels. The right sort of oak grew well inland, in the forests flanking the young Dordogne about Argentat, in the Corrèze département. Oak planks were lashed into wide rafts and sent off downstream, carrying passengers, merchandise and yet more oak planks. The rafts were navigated - a specialist task: the Dordogne is an uncertain river, as anyone who has ever canoed it will tell - by crews of gabariers. Once arrived at Bordeaux, the entire raft was dismantled and the timber handed over to the coopers.

Our gabare was nothing like this. It was a comfortable little shallow-draught river boat, seating about 40. Our steersman set off chugging at a comfortable pace down the river, slowing now and again to allow the passengers to take photos of the many châteaux that dominate the riverscape. Our guide, Jacqueline, described them: La Malartrie, Fayrac, Marqueyssac, Les Milandes (once owned by Josephine Baker), Beynac and finally Castelnaud, a vast and mighty fortress perched on a crag high above the river. During the Hundred Years' War the English in Castelnaud glared across the river to the French in Beynac, each hurling arrows, crossbow bolts, rocks and insults at the other. Nowadays the beautiful Dordogne glides serenely between, and the only sound remotely associated with war is the pounding of jack-hammers as a huge programme of restoration is undertaken.

Castelnaud, Jacqueline said, was built on the site of an earlier fortification; its name means 'new castle'.
Josephine and I exchanged glances. This couldn't be right, surely?

The bridge at Castelnaud marked the limit of our downstream journey, so we about-turned for the return leg to La Roque Gageac. I was wondering how those gabariers had made their way back upstream from Bordeaux to Argentat, a distance of about 200 miles at a rough estimate. According to Jacqueline they walked, sometimes taking odd jobs on the way. By the time that I'd worked out that this entailed maybe three weeks' worth of plodding back at the rate of 10 miles per day, so that the whole there-and-back business was like kids lining up for a go on the big slide, i.e. a long aggravating wait for a short burst of effortless pleasure, we were moored at La Roque Gageac and were queuing to disembark. It was here that I made my bid for a place in Pedants' Corner.

This went on for some time until Josephine settled the matter by asking what the Occitan for 'new castle' would be. 'Castel novel,' I said, with great assurance, but actually it was a guess. Jacqueline looked bemused, as well she might with two Brits discussing in French the niceties of a dead language, there are better things to do on your wife's birthday than waste it on futile argument, so we moved on.

We had a happy picnic lunch at Marqueyssac, one of the châteaux we'd seen earlier from the river. It's a much more modest place than the fortresses we'd seen earlier, but it did have one outstanding quality: its box hedges. If box hedges and bushes are your cup of tea, if they're something you're partial to, if you've got a positive thing about box hedges, if you're obsessed to the point of neurosis with box hedges, Marqueyssac is the place for you. You would have thought this would be the ideal place for a maze (French: un labyrinthe) but there isn't one, and you just have to put up with the view instead . . .

. . . and what a view! Marqueyssac, perched on its cliff high above the river, surveys a wide sweep of the most delectable Dordogne landscape, hill-top villages, deeply forested hills, mighty fortresses and turreted châteaux, the chequer-board of vineyards, fields and poplar groves far below, beside the river where the gabares ply their tourist trade, and maybe one with Jacqueline saying 'you know, we had such a pest of a Brit this morning . . .'

I looked it up in our Occitan-French dictionary when we got back. Naud (or nau or naut) does indeed mean 'high'. Novel does mean 'new'. And as for Castelnau in London, the name does indeed come from our part of the world. In 1691 a certain French Protestant nobleman called Boileau moved to London to avoid religious persecution. He settled south of the Thames, in Barnes, where his descendants developed the area. He came from Castelnau: not the great fortress on the cliffs above the Dordogne, but from Castelnau le Lez, a suburb of Montpellier. Why, we were there only the other day . . .