Christopher Campbell-Howes hears it from the horse's mouth . . . 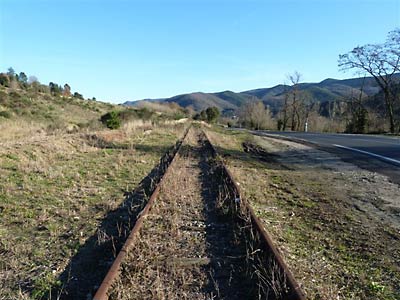 THE OTHER evening our friend Jean-Claude came round to see us. He appears in Campbell's Diary quite often. In some ways you could say he was a pillar of this column. He has many claims to fame, and not the least intriguing is that he is, or was, distantly related to Saint Theresa of Lisieux. He's a senior village councillor and has been involved in local government for about 40 years, latterly in the village and before that in Île de France, the region around Paris. We rely on him for all our inside information about what's going on the village and round about.

TURN RIGHT out of our drive, down the lane a bit to a wayside cross, turn left on to a concrete track, and presently you come to a gap through the brushwood and undergrowth. Go through this and you find yourself on a gravelled path about 4 metres wide. Turn right, and this path leads into the village. Turn left, and you follow the contour of the valley and the course of the river below for miles and miles, in a series of gentle bends, bridges, cuttings, embankments and tunnels. You're following the route of the railway that once ran up and down the valley and beyond. Some years ago they took all the rails and sleepers and fishplates and signals away, laid down a fine gravel, and opened the track to walkers, cyclists, riders on horseback, donkey carts and so on. Everything except motorised vehicles. It has to be said that a mostly level traffic-free trail, eventually extending to about 80 miles, is a wonderful asset, a magnificent amenity both for tourists and for local inhabitants. We walk along our little section of it almost every day.

The railway had barely 100 years of operation before they declared it uneconomic and closed it in the 1970s, at roughly the same time as Dr Beeching closed down so many branch lines in the UK. At its fullest extent it ran from a town called Bédarieux (if you want to know where that is, find Béziers almost on the Mediterranean coast, follow your finger roughly northwards and you'll come to it) to Mazamet, a modest town on our next-door département, the Tarn. At the moment you can walk, cycle, gallop or relax in your donkey cart eastwards from Mazamet as far as Mons la Trivalle, our next-door village, a distance of about 45 miles. At Mons la Trivalle the trail ends abruptly. Suddenly the rails reappear, or they would if they weren't covered in a jungle of ash trees, brambles, wild cherry trees, old man's beard and thistles of all degrees of prickliness all the way - about 10 miles - from Mons la Trivalle to where the line started in Bédarieux.

A few days ago Josephine and I were driving along the valley, and at a place where in the old days there would have been a level crossing there were men clearing the jungle with diggers and chainsaws. Were they finally going to open up the last section of the old railway? We asked Jean-Claude about it.

They were indeed, he told us. And, not being a man to use one word where a hundred would do, the following saga unfolded.

As this section (you are keeping up, aren't you? The bejungled, overgrown section from Mons la Trivalle to Bédarieux) lay wholly within the Hérault département, the département authorities set about purchasing the railway line from the SNCF, the French national railway system, who owned the line. Buying a derelict railway line is more complicated than you might think: the exact boundaries have to be surveyed, rights of way established, state of repair of bridges, tunnels and other engineering works agreed, change of use for land-tax and insurance purposes and so on. All this took so long that local government reorganisation overtook it. Briefly, départements are on the way out. Smaller units called pays will replace them, under the umbrella of the région. A bit like the German Länder. There wasn't much point in the Hérault département continuing the transactions, so the derelict railway dossier was passed to the Languedoc-Roussillon région.

Real estate purchases involving railway lines have to be authorised by central government in Paris. The dossier went the rounds of various ministries. A big hiccup followed. The French Ministry of Defence vetoed the sale.

The line could not be sold, the MOD insisted. It was vital for the transport of war material.

What war material? the région asked.

The MOD could not say. The information was classified.

Eventually some hardy soul penetrated the MOD archives and discovered that the line had indeed been declared strategically important for the carriage of war material.

In that year an army department responsible for the provision of cavalry horses had placed contracts with a stud near Mons la Trivalle. Horses from this stud were transported by rail from Mons la Trivalle to cavalry depots all over France. The stud closed down in 1919 or thereby, but the categorisation of the line as strategically important remained.

To cut a long story short, which is something Jean-Claude has never been known to say, the MOD eventually relented and the sale went ahead. The whole process took some fifteen years.

WHEN I took the photos of the newly-cleared line, I spoke to le patron - who happened to be there - of the company contracted to remove the old rails, fishplates and even the large-gauge gravel. And of course the sleepers. The rails, he said, were going to be used for some arcane process in cultivating oysters, a prime activity in the Mediterranean lagoons between Béziers and Montpellier.

I was particularly interested in the sleepers to form a flight of steps in our garden.

Clearly he was disappointed that I wasn't going to make him an offer for the lot. If that's all you want, he said, you can help yourself. They're all in a heap at Mons la Trivalle. Take what you want, and welcome.

On Boxing Day, which isn't a holiday in France, I hitched up the trailer, enlisted the help of Adam, who helps us in the garden when he isn't studying music technology at the University of Valenciennes, and set off to find an absolute mountain of sleepers at Mons la Trivalle. Here's Adam with our booty.

AND HERE'S somebody else making good use of the old railway line. But if she thinks your correspondent, a.k.a her aged old ancient veteran grandfather, is going to pull her all the way to Mazamet she's got another think coming.

And of course when those sleepers have been put to good use and those garden steps are finished, somebody will have to inaugurate them. Jean-Claude is the obvious choice, isn't he?

On the way to Mazamet