Christopher Campbell-Howes accounts for his morning . . . 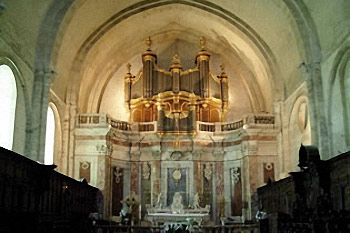 ALONG THE road early to St Pons de Thomières, a place of 2353 inhabitants, according to the 2007 census. One of the curiosities of St Pons - as it's called for short - is that there's a cathedral in the middle of it. If hosting a cathedral promotes a place to the rank of city, St Pons must be the smallest cathedral city in France, if not Europe. It's a peculiar cathedral, too. For one thing it's the wrong way round. For the early church builders it was imperative for the altar end to face east, towards Jerusalem.

It's the other way round at St Pons. You enter from the east, as though you'd just come as the crow flies from Jerusalem, through a small, unobtrusive door. You find yourself in a vast nave, dark, dank, musty and not in the least conducive to spiritual uplift. It wouldn't surprise me to see bats flying about in it. Vampires - but no, I must rein my imagination in. If you want to know any more about it, I can only refer you to a local on-line guide, which reads: It is at the 10th century that Raymond Pons, Count de Toulouse melts an abbey on left bank of Jaur around which a quoted news will increase. In 1077 the abbey did not gather less than 11 monasteries and in 1318 the abbey one is high with the row of cathedral. During wars of religion, in 1567, the abbey is put at bag. This is why, the cathedral, such as you see her today, has sudden many modifications.

So now you know. 'Put at bag', indeed. I see what's happened. The original French would have been mise à sac, put to the sack, i.e. robbed, burnt and ruined. The translation engine has picked up sac as meaning 'bag'  . . .

. . . but before I start issuing stern warnings about the idiocy of using on-line translation services, I'd better just tell you about the west end of the cathedral, where there's a mighty organ spreading its wings like a giant bird. Beneath the organ there's the high altar, a monstrous curly-wurly Baroque confection in the local marble, blood red with veins of white like sirloin steak.

Mention of blood leads me to the reason for going to St Pons so early in the morning. There's a medical laboratory a short bat's flight from the west end of the cathedral, where there is, as you might expect, an absolutely magnificent late Romanesque door. This doorway is never photographed, because a narrow street divides it from the houses built in front of it and no camera known to me has a lens capable of taking in a 40 metre wide field of vision from 1.5 metres away without distortion. Why has this cathedral been turned the wrong way round? I don't know.

I have an appointment at the medical laboratory, so I go in, introduce myself and hand over my Carte Vitale. This is an electronic card with my French National Insurance number, personal details and entitlements under the French national health scheme, a must for anyone living in France full-time. The laboratory is private and very old-fashioned, although the equipment is well up-to-date. After a short wait M.Leroux the proprietor, who lives upstairs above the shop, calls me in. We shake hands. He finds a blood vessel on the inside of my elbow, inserts a needle and takes out some blood, about an egg-cupful.

Some people can look at the syringe being thrust into their arm and filling with their own blood, others find it difficult. For some reason I prefer to look away, although I have no qualms about seeing other people being injected. Does this show a sensitive, artistic temperament? If so it's shared with M. Leroux the blood-letter: he's an amateur classical pianist. He tells me how he's progressing with the fantastically difficult Chopin piece he's working on. Would I like to come and hear how he's getting on? Would I like to try his Bosendorfer grand piano? These were unusual propositions coming from one who normally spends his time checking my cholesterol levels, but all the same I said I'd be delighted.

JUST AT the moment I'm on my own. Josephine is away in the UK for a few days, so I'm having to look after myself. Self-care depends heavily on Karine. I hasten to say, before you go jumping to conclusions, that Karine and her husband run a service station in the next village, a place called Mons la Trivalle. They've barely been there a year, but they've transformed what was a rather run-down filling station into the humming, throbbing social hub of the area, it seems to me.

Karine, in addition to keeping an eye on the pumps, also bakes. Quiches, tarts, desserts, filled baguettes, pizzas, that sort of thing. Just the thing for blokes on their own, if only temporarily. So after leaving the blood-letter with no fixed appointment but merely an outline intention to go and hear him play Chopin on his Bosendorfer grand, I dropped in on Karine. With a deep sigh designed to call out the sympathy vote I said I was living la vie célibataire, as a bachelor. I felt this was enough to draw out her instant maternal care instincts, suggesting what I might like from her plenty for my lunch, tea (called goûter here) and supper. And maybe even breakfast the next day, because she has a goodly supply of croissants and pains au chocolat, those flaky pastry delights with little lumps of dark chocolate inside. Mmmmm . . .

However, all she said was that I was a lucky bloke (Ah! le veinard!), she'd been married for 30 years and could just fancy a dose of la vie célibataire. Further development of this theme was held up by the arrival of an équipement team, who had come in for their breakfast. Equipement means the local authority's direct labour force: they're the people who mow the road verges, plough snow, dig out ditches, cut up fallen trees, etc. I've always found them a cheery bunch, laughing and singing from morn till night like the Miller of Dee.

One of them picked up the fag-end of our conversation. 'I've been married,' he said to me, 'for . . .'
There was a lull in the laughter and song while he worked the sum out on his fingers.
'36 years.'
'Congratulations,' I said. 'I'm afraid I can't match that.'
'To the same woman.'

They asked me how long I'd been married.
'Four years,' I replied.         'To the same woman.'
They seemed to think this was terribly funny.

Karine served them coffee and croissants at a table in the corner of the little snackery she's made, and then sold me - excellent value at €3 (£2.60) - a 90º slice of broccoli and Roquefort cheese quiche, putting it in a little bag for me. Or perhaps I should say 'put at bag'? It certainly didn't take me long to demolish it.

On my own. I'm quite looking forward to Josephine's return.