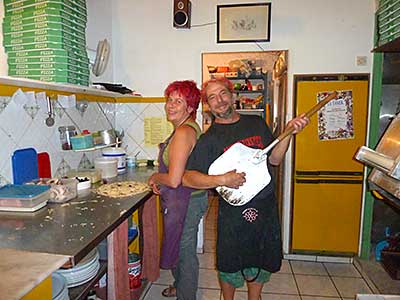 I DIDN'T notice it at the time. It's pure serendipity. Very occasionally, just when you're least suspecting them, things work out exactly right. I did ask the couple above if I could take their photo, little suspecting that they might be giving me more than I'd bargained for, that there might be a hidden bonus. As for taking their photo, there was no problem, even in image-protective France. Florence looked up from preparing a pizza with a lovely smile, and Filou obliged with his pizza shovel (if that's the term) as a pretend guitar. They did ask, quite rightly, what I would be writing for, and I was happy to answer that all being well this piece would appear here, on the UK's and possibly the English-speaking planet's leading French interest site, in September. I promised to give them the link.

All right, out with it. Out with the hidden bonus. It's a Joke. Yes, a real, live Campbell's Diary Joke. Look up there at the top left hand corner. What can you see? Why, it's clearly the Leaning Tower of Pizza.

And when you've recovered, I'll carry on.

IN SUMMER there's a wonderful choice of restaurants and eateries in the village and the surrounding area. Some I've written about before, and others will have to wait for another day. The population of the village, normally about 500, swells to almost twice that number in high summer. All tastes are catered for: if steak and chips is what you want, then there's a bar called Le Funambule ('The Tight-Rope': I've no idea why) where they'll serve you either under the stone-vaulted ceiling inside or at one of the handful of tables out on the pavement, where you can watch the traffic going up and down. For a basic but slightly more extensive cuisine there's the Hotel Laissac, where you can settle in the shade of the village plane trees and watch the same traffic. Once you could have watched the trains at the nearby station, but the last train puffed down the valley and into oblivion in the 1980s.

Or if you want want something really quite up-market you can try Les Fleurs d'Olargues. I remember this place about 10 years ago as a garage workshop. An enterprising Danish family came, saw, and were conquered: this was clearly the place to convert into a quality restaurant. By hard graft, determination and supreme cooking skills they've done it. Here you can sit in the shade of broad-leaved mulberry or pawlonia trees, or under a canopy of roses and honeysuckle, admiring the classic view of the village with its bell-tower on top of the rocky crag down which the old houses spill, while the river purls and gurgles  below, shimmering in the summer sun. It's a place you can't help but go all poetic about, especially on a full tum.

Then there's Chez Gillou, the pizzeria . . .

IN MID-AUGUST it isn't just the weather that hots up, sometimes uncomfortably, it's the local musical activity. Here in the village there's a festival called Autour du Quatuor, not a title chosen for ease of pronunciation by the many Brits that make up the audiences. In fact I'm really stuck for a translation that conveys anything. 'Around the Quartet' doesn't really suggest a series of five concerts within a week, so some of them are back-to-back, given by small groups of some of France's leading younger musicians.

So we had a foursome of mandolins, a foursome of violin, guitar, bassoon and bass playing Romanian folk music, a piano and cello duo, a string quartet and a string quintet. That makes five, doesn't it? Excuse me while I just work it out on my fingers . . . yes, five two-hour concerts all starting at 9 o'clock in the evening, so five late nights. And for me, responsible for their transport, five early mornings because so many of these visiting musicians had to be taken early to the nearest main-line station to catch the train to their next venue. (This is the life musicians lead, mostly spent sitting in trains, sleeping in a different bed every night and worrying. There's no glory or glamour about it at all. If ever you thought of becoming a professional musician, don't. Chose something settled and peaceful instead, like lion-taming or signing up with the Foreign Legion.)

And of course all these musicians had to be fed. Step forward, Florence and Filou. No, we didn't give them pizzas for every meal, just one, a memorable al fresco. Here they are demolishing some of F and F's finest:

Clockwise: Maja, cello: Pablo, violin: Bruno, another cello: Arnaud, viola: Pierre, violin: Josephine and Jean-Claude, president of the concerts association. I can't speak for Josephine and Jean-Claude, but the musicians mostly ate with their fingers. I suggested that, for string players, this method might be called pizzacato? Dead silence. But then the French are notoriously slow to pick up my puns.

WE PATRONISE Chez Gillou quite a lot ourselves, just the two of us, particularly after we've been working all day and Josephine doesn't fancy doing time in front of a hot stove. Then we pre-order our preferred pizzas by phone, hang about until they're ready and then nip down to the village to collect them. We've never tasted better. And they have such beautiful names:

- and so on. Actually, we've never tried any of these. We're not very adventurous. I prefer to stick with my staple:

and Josephine with hers:

And what we particularly like and enjoy is the thin crust pastry base F and F build their creations on. The last time we went down we were admitted to the holy of holies, the traditional pizza oven, where our order was just coming to cheese-bubbling, mouth-watering readiness. Mmm.....

OH DEAR. Or - the mildest of French expletives - mince alors. (Literally ' thin, then'.) Actually the news deserved a much stronger expression, but a family column like this isn't the place to go into French swear-words. The news hit us like a slap in the face with a wet pizza-base: Florence and Filou were closing down. Not just for the summer. Almost everything you remember about France from summer holidays disappears after you've gone, as though it was all an illusion. As though those breakfast croissants you fetched from the village had no existence, as though those sun-drenched afternoons round the pool were a dream, as though those velvet evenings with the moon and stars twinkling on the surface of your glass were mirages. Most of the restaurants mentioned above close down for the winter. The outside chairs and tables are put away, in the case of Les Fleurs d'Olargues in what was the former garage inspection pit.

The summer isn't long enough for the village pizzeria. The turnover just isn't enough, not making exquisite pizzas in the traditional way in penny numbers. I don't know what they're going to do, but at the very least Josephine and I and all the people in the photo above wish them all the very best.

The pizzeria oven at Chez Gillou