Christopher Campbell-Howes gets spoken to sharply . . . 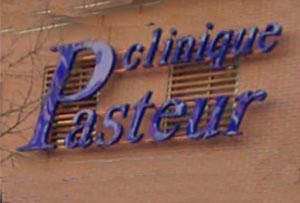 I WOKE up, alone in the 2-bed ward, with a start and a raging thirst. On the bedside cabinet there was a glass of water. I sat up, reached for it over the glucose drip in my left wrist, took a sip or two. Ah. Blessed relief. Another mouthful . . . and suddenly the door opened and the night nurse stormed in.

'What are you doing?' she said. 'You know that's not allowed! You know you have to be à jeûne!'

'I shall take the glass away,' she said. 'If you persist, they'll only postpone the operation.'

I said I was sorry. I expected the night nurse to tell me not to do it again, but actually she said C'est pas grave, i.e. It doesn't matter, Not at all, Don't mention it, something like that. So perhaps it wasn't such a terrible sin after all.

Perhaps I should explain à jeûne. It means on an empty stomach. My orders had been that nothing should pass my lips after midnight. Only in conditions of strict fast could they possibly operate first thing in the morning. The night nurse went away, I drifted off into an uneasy sleep, semi-paralysed by the cardiac sensors and wires all over my upper body and a syringe driver, hooked up to a glucose drip, in my wrist. Before dropping off again I wondered how the night nurse knew I was misbehaving: I knew my sensors were connected up to a monitor in the ward office, but were there closed-circuit television cameras as well? (In fact there aren't.)

The night nurse was back at 5.30 to take my blood pressure and give me a couple of blood-thinning pills. With a glass of water, which didn't seem very logical to me. She disconnected the drip, enabling me to shower and get myself into a hospital gown, put on a kind of hairnet and a couple of blue elasticated bags to cover my feet. She came back just before she went off duty to tell me they'd be along presently to wheel me along to the operating theatre and I was just to wait quietly until they came.

WAIT? THE word hardly exists in the Sécu, the French National Health Service vocabulary. I wouldn't wish to bore you with the details, because listening to the details of other peoples' ailments is a bit like listening to accounts of their dreams, viz. your attention has wandered off on a long lead well before they've got to Chapter 2. (There are exceptions, of course, especially if you read on.) Unless you're a doctor, I suppose. Or an oneiromancer. Suffice it to say that while walking down to the village one Sunday in late August for lunch with friends the sky, until that moment the deep blue of high summer in the south of France, suddenly turned black. My legs gave way, I couldn't speak and had to avail myself of a rustic laneside bench, no doubt put there by the caring village council for the relief of villagers cracking on a bit and suddenly overcome with attacks of angina pectoris.

Josephine, no slouch in any way and certainly not when it comes to invoking the Sécu, got me home in a bit of a heap and rang Dr Everaere, the gentlemanly cardiologist who has looked after my coronary plumbing since since I first knocked on his door sixteen years ago realising that all those Scottish school dinners (my fault entirely: nobody forced me to choose Spotted Dick with Extra Custard every day) had come home to roost in my coronary arteries. Dr Everaere, off duty, answered Josephine's Sunday afternoon call, maybe from some leafy bower beside his pool: he would see me first thing in the morning. Wonderful.

So in the morning Josephine drove me the 65 kilometres to the modest town of Mazamet, where Dr E. has his surgery. He plugged me into his ECG box of tricks, discovered some quite nasty blockages, called a colleague and asked if we could be in Toulouse by 4 o'clock that afternoon? His colleague Dr Combes would operate the next day.

Toulouse! It's miles - erm, kilometres - away, Toulouse. We could be over the Pyrenees and into Spain in the time it would take us to get to Toulouse. Almost recklessly we said yes - erm, oui - even though Mazamet was well on the way to Toulouse, so we'd have to back-track home first to pack bags, etc. Nevertheless, by 4pm we were at the Clinique Pasteur, checked in and assigned Room 554, and there Josephine left me, uneasy and apprehensive. And expecting to be lonely, too.

I needn't have bothered about the loneliness. There was a constant flow in and out of nurses, assistant nurses called aides soignantes, i.e. care assistants, caterers, someone to distribute the forbidden water, someone to take blood samples for immediate analysis on the premises, the amiable Dr Combes himself, an elderly nurse with the dreaded body-hair razor . . .

. . . in the rush to get things ready at home I'd packed virtually the first book that came to hand, Shakespeare's Macbeth. I wouldn't tell everyone about this, but every now and then, maybe three times a year, Josephine and I and four or five friends meet round our dining table to read a Shakespeare play. Last time it was Cymbeline, the time before that Coriolanus, and next up - it hasn't happened yet - is Macbeth.

I'll maybe tell you more about this very curious expat activity another time, but just now I have to confess that in my rather uncomfortable dozing - strange bed, city lights, hospital noises, glucose drip, ECG sensors, all that - somehow the elderly nurse with the razor became equated with and morphed alarmingly into Lady Macbeth. Enough to wake anyone with a start and a raging thirst, wouldn't you say?

In the morning I was stretchered down to the theatre, the deed was done and a more or less satisfactory blood-flow to the heart was restored. The highlight of recovery and discharge the next day was a visit from - well, actually I don't know what to call him: traditionally, in UK terms, it would be Ward Sister, or even Matron, but as he was a bloke, and a blokeish bloke at that, you can see my problem. I can hardly call him Ward Brother, or even Patron, so I'll call him Bruno, which was actually his name.

While making out my discharge papers Bruno, intrigued like everyone else, Lady Macbeth included, to find they had a Brit on the ward, told me that he hadn't always been a nurse. He'd started adult life in fruit and vegetables, and this path had led him after a year or two and some business studies to become a supermarket manager at somewhere that sounded like 'Sheeplee'. This didn't mean much to me, but he persisted that I must have heard of it: it was near Leeds. Oh! I said: Shipley? Yes, that's what I said, Bruno went on, Asda's in Shipley.

I asked him what brought him from managing a West Riding superstore to the Clinique Pasteur in Toulouse. Well, he said, you only walk this earth once: you have to change direction now and again if you want to get the most out of it.

And having done just that myself, I couldn't have agreed more.

Josephine came to collect me and we left via the checkout, to continue the Brunovian idiom. The bill for the room came to €70, about £53. Otherwise, gratis. And no, I didn't go private: there'd have been no point. No waiting, you notice: as Macbeth himself said 'If it were done when 'tis done, then 'twere well It were done quickly.' Well done, The French NHS. And merci. From the heart.