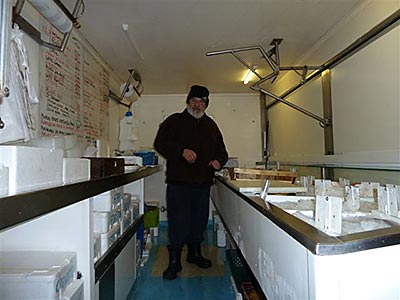 FOR AS long as I can remember, and that's about 16 years, Jean-Paul Maigres the travelling fishmonger has been turning up in the village in the early evening. Around 6pm the giga-decibel loudspeaker attached to his van announces his arrival, and because the village is cradled in a steep-to valley the sound carries everywhere and there's no mistaking, if you were in any doubt, that it's either Wednesday or Friday, the two days on which he trawls for customers round the village streets.

Regulars to this column may remember him, because he's been here before once or twice. A specially memorable occasion was one June 18th three or four years ago. June 18th is an important anniversary for many French people, and all over France there are ceremonies to commemorate General de Gaulle's 1940 appel or call, from London by courtesy of the BBC, to French people all over the world to fall in behind him and form new armies to oust the Nazi invader. In a sense modern France dates from June 18th, 1940.

It was a solemn moment in the early evening village ceremony when those present, who included Josephine and myself, were invited to observe a minute's silence in grateful memory of all those who had answered de Gaulle's call, many at the cost of their lives. Despite the splendid irony of June 18th also happening to be the anniversary of the Battle of Waterloo in 1815, Josephine and I did as we were bid, and no sooner had we bowed our heads than a mighty, fortissimo voice shattered the respectful silence.

M. Maigres had arrived. I'm afraid it was terribly hard not to giggle. Only 16-point capital letters can do justice to the might of M. Maigres' word:

(Which doesn't mean anything, really: 'Now then', 'All right', 'OK, then', 'Well, now' would be reasonable translations.)

(Literally 'I come from to arrive' i.e. 'I have just arrived', an unarguable statement of the obvious, which also has the unexpected benefit of rhyming with Eh bé.

And then there follows a jumble of non-rhyming French punctuated, very loud, with names of the fish he has to offer, and where they come from, something like:

'I've got good monkfish from the sea' and - until you know better - you wonder where else his monkfish might come from, if it isn't out of the sea. He goes on

'I've got fine mackerel from the ocean' and again you think, well, where else?

Aha. In fact there's a fine distinction between the two. If you look carefully at the photo below, you'll see the board on the left, with lists of his wares, is divided into two columns. Everything on the left comes out of the Mediterranean ('la mer') and everything on the right from the Atlantic ('l'océan')

TWO OF the books in Josephine's kitchen library are Mediterranean Seafood and North Atlantic Seafood. I mentioned to her that I would be writing about M. Maigres for this column a week or two ago, and we talked about the distinction between Mediterranean and Atlantic fish. Josephine told that many years ago she had met someone in Portugal who had a well-thumbed set of recipes for fish dishes, produced on that very thick paper, almost like blotting paper, that we used to duplicate things on to. 'Cyclostyle' and 'Roneo' are words that come to mind, words practically from ancient history.

These cyclostyled recipes described Mediterranean fish in authoritative detail, gave their various names in all the many languages spoken round the western Med., not just French, Spanish and Italian and their sub-dialects but Catalan, Maltese and North African dialects of Arabic too. They'd been put together by the UK ambassador in Tunis at the request of his wife, who, when she went shopping for fish in the local markets, had great difficulty in telling one fish from another and how they compared with fish she could buy back home in, say, MacFisheries, which was a national chain of fishmongers in Britain at the time. As you may not need me to remind you.

His Excellency did some research, produced the required information, had it cyclostyled (I'm guessing here) on the embassy ink duplicator and distributed round the diplomatic service wives.  In due course the diplomats and their wives were posted elsewhere, and the fish recipes travelled with them. In the meantime the original diplomat had so enjoyed the experience of researching fish that he resigned from the service to write full time. His name? Alan Davidson. The cyclostyled sheets became the basis of his two now famous books, bibles of fish cuisine, Mediterranean Seafood and North Atlantic Seafood.

Alan Davidson has many interesting things to say in comparing the Mediterranean with the Atlantic. For one thing, the Med. is much saltier than the Atlantic. For another, because the only entry is through the Straits of Gibraltar, not many Atlantic varieties find their way into the Med. The result is that there's a marked difference between Atlantic and Mediterranean fish, and Monsieur Maigres is quite right to underline it when his mighty voice alerts the village to his arrival.

IT'S A a two-man concern, Jean-Paul Maigres and his brother Claude. Claude spends his time getting up very early every weekday morning, driving to the Mediterranean port of Sète and buying fresh fish landed that morning at the quayside fish auction, something called la criée because there's so much shouting. Loaded with fish, he drives back to our part of the world, to a little shop the brothers have in the town of Bédarieux, about 20 minutes away from us, where wholesalers will deliver Atlantic fish. His brother Jean-Paul loads up his refrigerated van and sets off on his rounds, taking in over the week some 50 villages.

We went to see him just before Christmas, mainly to collect some lobster tails we'd ordered for Christmas Eve. He was - as you can see - well-wrapped against the cold, all except his hands. He's a chatty man, and had no hesitation telling us how he found it impossible he found it to work with the crushed ice his fish are stored in and with gutting and preparing them with gloves on. No, he never got frostbite.

looked wonderful, although they're not something I care for very much. And although I sometimes get exercised by the way some fishermen scour the seabed so wastefully and indiscriminately in search of Coquilles St Jacques, St James' Shells, aka scollops, that doesn't prevent me enjoying them very much, lightly seared in butter or olive oil, served with a little pepper, celery salt and garlic, and served with a dry white wine. As suggested by Alan Davidson, of course.

As we left M. Maigres we wished him Bonnes fêtes de fin d'année, the French equivalent of Compliments of the Season. And if I was sitting in his cab, holding his microphone, and I wanted to wish you a happy 2013, I expect it would come out enormously loud as

-which I do. Wholeheartedly.