Christopher Campbell-Howes gets in among the local wildlife . . . 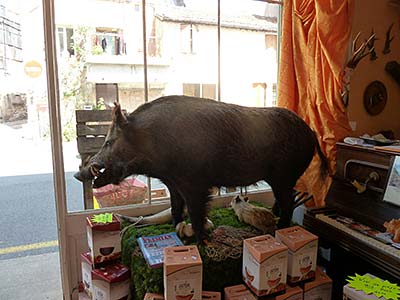 YES, WELL might you ask. What is it, first of all? And what's it doing in someone's shop window? Is it for sale? Does it play the piano? What's that underneath its tum?

All right, all right. One at a time. It's a sanglier, a wild boar. You needn't worry, its days of charging, uttering savage grunts and tusking you to death are done. It's an ex-wild boar. It's stuffed. It won't move. The only thing that moves about it is the cloud of dust that rises if you pat it.

To be precise, it's une laie, a female, a wild sow. The males have even broader shoulders and a fearsome mane. The smaller, paler creature underneath is un marcassin, a wild piglet.

They're topical just now (I'm writing this towards the end of August) because a couple of weeks ago la chasse, the local hunting association, oiled its shotguns and wound its dogs up to barking mad fever pitch and the wild boar hunting season started. Numbers of wild boar are up in this part of the world, and not just in our deeply forested hills: they're coming down more and more into the valleys. None of our property is fenced, and we get frequent visits from them in the close season, winter and spring, always at night. That rustling, snapping of twigs and grunting at 3 o'clock in the morning? Nothing to worry about: it's just a posse of wild boar in search of chestnuts (sweet, not conkers), the miniature acorns we got from Mediterranean oaks, wild garlic bulbs, tasty roots, slugs, snails and no doubt puppy-dogs' tails as well. They run off if you shine a torch at them and shoo them away.

I wouldn't mind them making free with our chestnuts, and there'd be no need to shoo them away, if they didn't plough up the ground haphazardly to a depth of about 6 inches (15cm) in search of food, making a desperate mess. They don't help their public image by breaking down drystone terrace walls, either. It's when I'm woken in the night by their rootlings accompanied by the sound of a mini-landslide as a few more wall-stones go rolling down the hill and the sangliers are grunting to each other 'Once more unto the breach, dear friends' that I begin to think yes, maybe I ought to support la chasse a bit more enthusiastically.

But never mind all that. Here's the other side of the shop window:

We're not badly off for shops in the village. A tabac (newsagents and tobacconists), a chemists, butchers, bakers, a village stores, a bio (organic) greengrocers, two hairdressers, estate agents, post office, a part-time bank, two bars, a restaurant, a knick-knackery, and the shop above. Standing proudly at his door is the proprietor Jean-Luc Bénézech. He calls his shop 'Chez Toutoune'.

'Chez' is easy, it just means 'at the house of', or simply 'at'. 'Toutoune' is more complicated. Nicknames are even more common among the French than they are among Brits, and they often go back to remote childhood. (Not always, though: there's a builder in the village whose real name is Didier, but when working a number of years ago he accidentally knocked a pot of flowers off someone's window-sill, and thereafter he became universally known as 'Géranium'.) As a small child Jean-Luc was known as le petitoun, local dialect for 'the little one'. It didn't take long for this to be corrupted affectionately into Toutoune, and that's what he's been known as ever since.

You've twigged what he sells. No, it's not stuffed wild boar. Or pianos. It's fruit and vegetables, often from his own garden. And - the vente de vin sign gives it away - he sells local wines, mostly in the bottle but also in cubis or vinocubes, the wine boxes you can see piled round the stuffed sanglier like sacrificial offerings. He's been retired for some years now, but he can't bear the idea of inactivity, so he runs his shop and generally keeps open house in the back room, and when you go in sometimes you catch a glimpse through the bead curtain of Toutoune and his mates playing cards or chatting round their apéro, a convenient name for a drink at any time of night or day.

The piano? It's not worth asking. It's a convenient place for Toutoune to stand his cashbox, which serves as a till.

His shop is very popular with tourists, especially those who find stepping back in time congenial. Very 1880s, his shop front. Go into his shop and you might be in a Marcel Pagnol film. Apart from the wineboxes, nothing can have changed since about 1925. Certainly the piano hasn't been tuned since then.

WILD BOAR haven't been the only preoccupations lately. Josephine was outside attending to a rose recently and discovered that a small army...well, battalion...erm, actually more like a platoon, of grasshoppers had formed up on the parade ground of a rose leaf, as though some grasshopper drill-sergeant had shouted whatever the French is for 'right, you 'orrible shower, get fell in'. Fond of insects, and France, though I am, I'm utterly unable to explain how it was that these French sauterelles should all be facing the same way and in the same pose at the same time. Come on, chaps, you've let the side down, I mean, this is France: the nation's honour and reputation depends on everyone insisting on doing things differently from everyone else. Where's your vive la différence? Anyway, Josephine went to fetch the camera, fearing that by the time she got back they would have been dismissed.

This is the chap (well, chapess: presently she'll lay eggs) who makes all the noise in summer. She's a cicada. If you're just back from holiday in the south of France (courtesy of French Connections, of course), her song will be still be ringing in your ears. All day she sings, with brief intervals, a constant chirruping that sounds as if everyone in the neighbourhood and all their children were playing maracas. It's so omnipresent that eventually you screen it out of your hearing. What's more, she only sings when she's happy.

The price I pay for having planted several mostly ornamental trees over the past ten years on fairly barren land is that some of them have to be watered day in, day out throughout the summer. I was on my way one evening recently, watering-can in hand, to douse a silver birch that I noticed this diaphanously clothed young lady clinging to the trunk.

Down with the watering-can, out with the camera. This is a rare occasion, mostly cicadas are invisible. They're like nightingales, as soon as you try to pinpoint them from their song, they shut up. But here's one at eye-level. What luck!

Presently she will pierce the silver birch bark with her proboscis and will start to suck out the sugar-rich sap. At that moment she will start to sing with contentment. (Actually she makes the sound not with her vocal chords - she hasn't got any - but by rubbing the plates of her abdomen together. Something I've never tried, I have to say.) Ants will hear the song, or maybe the vibration, and they'll immediately climb the tree to find her. When they've found her, they'll pull her proboscis out of the hole she's made in the bark, and drink the sap themselves. Fed up with being taken for a universal provider for ants, the cicada will stop singing, will open her elegant wings and will fly off to find another tree, and the process starts all over again. She only lives for about five weeks.

When she has laid her eggs, she will die, and the ants, universal scavengers, will carry her delicate cadaver away. Instead of honouring a beautiful creature with a lavish funeral, they eat her. It's tough, nature. If you don't believe me, ask Toutoune's wild boar.