Christopher Campbell-Howes gets in among the mellow fruitfulness . . . 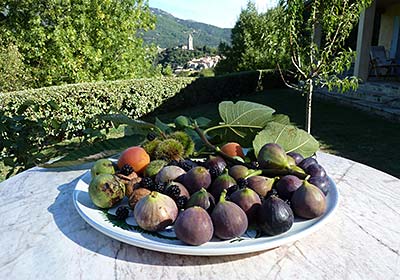 SUCH A cold wet spring this year, followed by such a hot dry summer, has thrown everything out of kilter, so now nature is striving to catch up with itself before the autumn sets in, so all the late summer wild fruits are ripening together. As you can see in the bowl above, the apricots are going on for ever, trespassing into the chestnut season just about to start.

Busy times in the kitchen for Josephine, and for both of us in the hedgerows, making certain that we come back with full collecting bags. At this time of year a wonderful instrument called a fig-hook comes into its own: ours is a 10' (3m) length of galvanised 1" (25mm) pipe with a hook welded into one end. You push it up into the tree, select a branch laden with figs, hook it on and pull down to within your reach. Not too hard, mind, or the whole branch will snap (this happened the other day, and words were spoken), and while this might make it easier to pick the figs there'll be one less branch to bear any fruit next year.

Figs are quite special. It's one of the many little luxuries of living in the south of France, having this extraordinarily sweet and very ancient fruit - it's mentioned in Genesis, after all, although maybe as off-the-tree clothing rather than as fruit - growing like weeds in the hedgerows and on the edge of woodland. Unfortunately it's not just Josephine that goes out with collecting bag and fig-hook: there's a lot of competition from her sworn enemies, the hornets. As soon as the sun has touched the upper branches and warmed the fruit in much the same way as a thoughtful host will bring a bottle of good red wine to room temperature before serving, the hornets will descend for a rich breakfast of fruit sugars. They're very possessive, and hornet stings aren't much fun. The secret is to go out figging before the sun is very high in the heavens and the hornets' alarm hasn't yet rung.

Walnuts are quite different, although there's some stiff competition for them too. Not hornets this time, but squirrels. It used to surprise me that having come to live in France - goodness! is it really 22 years ago? - from Scotland, where the squirrels are red, that they're red here too, and not the grey variety that seems universal in England. Somehow it's easier to forgive a red Squirrel Nutkin scampering off with a scrumped walnut between its paws than a grey one. And certainly easier to forgive than a biped humanoid scrumper, conveniently convinced that because our walnut tree grows beside the lane its nuts are common property. Our line is, if people - I'm not talking about squirrels - ask first, then we're usually happy to invite them to help themselves. And I ask you, impartial, balanced and measured reader that you are, wise in the ways of the world and of walnuts, if this is fair enough? Yes, thank you, I knew you'd agree.

But some so-and-so's there are who, when challenged politely, rudely bawl out their spiel (Fr. le baratin, just thought you might like to know, especially with French evening classes starting up again, never know, might come in useful, impress the rest of the group at least as much as the tan you've acquired in the Dordogne or the Vendée or the Côte d'Azur over the summer. Courtesy of French Connections, of course. Now where was I?)

Oh yes. Le baratin. Yes, property is theft, they cry, and if we were softer people we'd begin to feel ashamed of owning a walnut tree in the first place. Or of owning anything. But the best way to avoid any little local difficulties of this kind is to pick all the walnuts before anyone else can get their thieving paws on them. No fig-hooks here: the only way is for me to scramble up into the tree (I know . . . at his age . . . tut-tut) and shake the branches violently until the nuts shower down on the waiting Josephine below. Not literally, of course, although it might be quite useful if she stood beneath the tree with an umbrella turned inside out over her head.

That's the easy bit. They're green when they fall (they're the chaps on the extreme left of the dish above), and the next job is to hull them, to get at the nut inside. A miserable job. Walnut juice is notorious for staining, for weeks afterwards your fingers look as if you've been smoking whatever the French is for Non-Filter Full Strength Extra Mega Navy Cut cigarettes at 40 a day since you were 14. Opening the shell with a special nutcracker is a spare-minute job that lasts over the winter.

'Today's tendency to prefer natural and inexpensive produce inclines us to follow our grandparents' footsteps. Like them we turn towards the healthier produce which can often be found at our fingertips. We rediscover the produce which so delighted our ancestors.

The elderberry harvest stretches from mid-August to September. Combine the practical with the agreeable: go out for a walk, take a big basket or a bucket with you, and set yourself to picking the dark and juicy elderberry trusses on highway and in hedgerow. It's all free!'

(H'm. Better not tell that to our walnut scrumpers.)

Having followed the footsteps of her ancestors, Josephine washes and drains the elderberries, and then strigs or picks them off the stalks. She puts them with a very little water in a saucepan over a low heat for five minutes, crushing the berries gently with a fork. She lets them cool, then passes them through a Moulinex vegetable purée mill or strainer, a few spoonfuls at a time. She leaves traces of pips and skin to give the jam more consistency, but if a pure jelly is required the crushed fruit can be passed through a jelly bag.

Next she weighs the juice and pours it into a preserving pan, adding the same weight of sugar. (Some add pectin and lemon juice, but not Josephine: she has another wheeze, one that I'll come to in a minute.) Stir, allow to simmer for two minutes, skimming off any surface scum. Pour into pots and allow to cool.

So much for that. Even with elderberries we're under threat from poachers. We have a beautiful heavy-cropping tree practically outside the kitchen door, but someone else claims ownership too. You can't win, can you? They're the black redstarts, neat little robin-like birds, that magically appear at elderberry time. They're extraordinarily adept at hovering over the trusses, pecking at the biggest and juiciest berries. From dawn till dusk. The quantity of fruit that comes our way makes about enough jam to fill an eggcup. What to do?

To fill out the quantity we made one of those serendipitous discoveries that I'm happy to pass on to you - if you promise not to come scrumping our figs or walnuts or elderberries (fat chance) or anything else you fancy on the dish in the photo. It's a deal? Cub's/Brownie's honour? Right.

Up in the hillside jungle and wilderness behind our house there's a massive bramble thicket, impenetrable without something like mediaeval armour at the least. Of course the juiciest and most luscious blackberries are always the most inaccessible, even with the fig-hook, so my harvest usually consists of the most wizened and deformed fruit from the lower brambles, and it's a close-run thing as to which are the more numerous, the berries in my bucket or the bleeding scratches on my arms. No, it's not easy - blood, sweat, toil and tears in my jeans.

Never mind: they are absolutely delectable jammed quantity for quantity with elderberries, the taste of the one bringing out the best of the other, and the pectin-rich blackberries make for a good firm jam. But oh! those redstarts! I wouldn't deny them for the world, but if only they could just find someone else's elderberry trees...

Here's this years total quantity. Not much, is it? According to Josephine it's so highly flavoured and concentrated that a little goes a very long way. It'll have to, won't it?