Christopher Campbell-Howes peers into the mist . . . 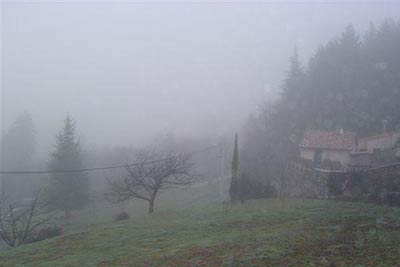 OH DEAR. Or to put it in French, mince alors. Or zut alors. I don't think we feel strongly enough about it to reach much deeper down into the barrel of French expletives. Yes, it's resistance to change that I'm on about, since you ask. I suppose it's age, really. Perhaps we've arrived at a time of life when interruptions to the regular routine maximumly cheese us off. I know. It's desperate, isn't it? You'd have thought we'd might be a bit more resilient, we'd have learnt to parry the slings and arrows of outrageous expat fortune,  wouldn't you?

Take a case in point: every year at about this time, mid-October, we drive up into the hills for a time-honoured circular tour to see the autumn colours. We've been doing it for years. We'd had it planned for a certain week when there wasn't too much else going on, and what happens? Rentrées maritimes.

Rentrées maritimes (or maritime re-entries, but honestly, if you've been reading this column for any length of time - and if you have, thank you - you ought to be able to manage this sort of translation without any help from Campbell Spoonfeeding Co. Ltd.) is a weather condition we get down here in the Deep South now and again. Weather systems from North Africa swoop across the Mediterranean picking up so much water from the sea that you wonder that there's any left in it, but of course it's only on loan: it all runs back into the sea after it's been dumped on us. Rentrées maritimes are warm, windy, wet and muggy, the air smells slightly of stale beer, and depending on the atmospheric pressure elsewhere they can reach inland for at least 60 miles, drenching and dampening everything, including the spirits of elderly Brits who need urgently to fulfil their annual call to ooh and aah at the autumn colours.

A couple of days of vexation at having our routines disturbed by the mist and murk like in the photo above passed. Then, ô miracle! - flying in the face of what la météo (come on, you can guess) on television the night before told us, a day dawned bright and clear, the autumn sun picking out the rain-washed colours, bright and sparkling as a newly-varnished Old Master. With us it was the work of a moment to drive off up into the hills on the well-trodden route, much relieved.

The range of mountains on the north flank of our valley is called l'Espinouse, the spiny one, and a glance at the photo will show why. They're as studded with crags and jags and pinnacles as a piece of sandpaper under the microscope - but why should I hold up progress while dreaming up the telling simile when I can show you what I mean?

The Espinouse rises to about 4000' and apart from the crags and jags and pinnacles it's covered in forest, either managed pinewoods or beech. Beech gives the splendid colours, and we'd hardly reached the 3000' contour when the display started, bright as newly minted small change, gold as the patines of dawn on the Mediterranean wavelets - but again, why should I detain you while I delve for the arresting simile when I can show you etc., etc.?

No I know it's not New England

Mmm, that deserted car . . . and it wasn't the only one: as we drove up into the mountains, we passed more and more Peugeot and Renault, Citroën and, yes, Toyota Marie Celestes, apparently abandoned. Suspicious, or what?

Not really. It's the mushroom season just now. There's nothing like a goodly dose of rentrées maritimes to bring them on, and nothing like a goodly dose of autumn sunshine to bring the mushroom hunters out. Unlike in the UK, the woods are seldom privately owned: signs tell you you're in a Forêt Domaniale, state-owned forest, or Forêt Communale, belonging to the commune, the lowest tier of local government. So mushrooms are a free-for-all. A glance into the depths of the forest shows little knots of people who have left their cars by the roadside. The energetic ones poke about in the undergrowth for cèpes or chanterelles, while others lurk balefully, hopeful of cashing in on someone else's discoveries. It becomes an impish temptation to march confidently with an empty sack deep into the woodland, while no one's looking fill it with leaves and twigs and forest detritus until it bulges, carry it back ostentatiously, and then watch to see how many mushroomers slope off furtively in the direction you've just come from. But would we do such a thing?

We drive on, out of the beechwoods. A winding road, barely wide enough for two cars to pass, leads into the rocky heart of the Espinouse. Crags, scree, rocky outcrops, lone pines, jags and pinnacles stretch southwards as far as the eye can see, towards the Mediterranean horizon:

Rentrees maritimes on the horizon

But what's that? Far to the south there's a heavy band of cloud. We recognise it at once as the forward edge of the rentrées maritimes. The high pressure inland has prevented it rolling in off the sea and enveloping us in murk. We're lucky: this is what has vouchsafed us a fine day.

Directly in the path of the rentrées maritimes (hopefully this is this last time I shall have to type it), lying 7 or 8 miles inland, is the town of Béziers. It's not our favourite place. Maybe it lies too much in the shadow of the much larger and more prosperous city of Montpellier, 25 miles or so along the autoroute to the east. We had been in Béziers (buying Hallowe'en outfits, if you must know) earlier in the week, in all the murk and wet the rentrées maritimes (there, I knew I'd have to do it again) could shroud us with.

I took one or two photos, with this piece in mind. Béziers hasn't got much going for it, but the central avenue, like a Spanish rambla, is very fine.

This avenue, home to an enormous and highly scented flower market on Fridays, is called the Allées Paul Riquet, after a man whom you can maybe just see on his plinth at the very vanishing point of the perspective of my photo. Here he is in close-up:

Paul Riquet is Béziers' most celebrated son. In the reign of Louis XIV (1643-1715) he was responsible for the construction of the Canal du Midi, designed to link the Atlantic Ocean with the Mediterranean, thus avoiding having to sail all the way round Spain and Portugal. His canal is very cleverly engineered with locks and feed streams and bridges: a bridge carries it over the river Orb in Béziers. It's not used commercially or militarily any more, but it's very popular with holiday makers. Fleets of pleasure craft chug up and down it in the holiday season, enjoying the shade from the thousands of plane trees lining its banks. Or they do for the moment, at least: it has been discovered fairly recently that all the plane trees are diseased with a kind of fatal fungus. Gradually they're being cut down and replaced with more resistant varieties, but most are still there. If you want to enjoy the autumn colours along the Canal du Midi, now's the time to do it. But you may have to wait for a sunny day...