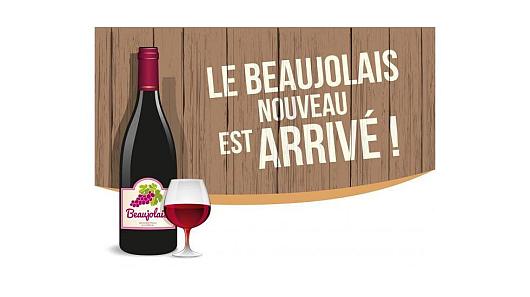 Beaujolais Nouveau Day marks the release of this season’s fresh, new Beaujolais wine – and the big day this year is 17th November. The Beaujolais Nouveau release is always celebrated in France on the third Thursday in November and, under French law, the wine is released at 12:01 a.m. that day, only a few weeks after the grapes have been harvested.

Beaujolais Nouveau originated about a century ago as a cheap and cheerful drink produced by locals to celebrate the end of the harvest season of the Gamay grapes that go into this light, quaffing wine. The grapes are picked by hand in the Beaujolais province in the Rhone region of south western France.

In Britain, the new wine is usually on sale with some fanfare on the day of its release – and should be drunk by next May, so don’t lay down bottles for too long! Parties are also held throughout France to celebrate the first wine of the season and in true French style, they are usually accompanied by fireworks, festivals and music.

But the heart of the celebrations is Beaujolais itself, centred on the town of Beaujeu, the ancient capital.  Here Les Sarmentelles is a five day event – and for wine lovers a rather tempting one. A tasting contest features all twelve kinds of Beaujolais and the winner gets their weight in Beaujolais-Villages. In the evening, the farmers that made the wine are celebrated in a torch lit parade. At midnight on 17th November, fireworks mark the release of the new wine, which is drunk until dawn. Quick! Find your accommodation in and around Beaujeu