Last month I had to speak French, all week! 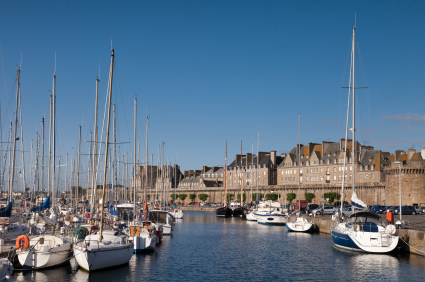 I have frequently said to my wife that the only way I will ever master the art of speaking French properly is to have an intimate affair with a French girlfriend.

This is a method that she is not keen on and for which I lack the time, energy and enthusiasm, although I have had a few interesting propositions along the way.

However last month I was forced to speak French in a concentrated setting, with no letup or relief, and I am not sure as to how much I learned, but it was fun.

Four friends hired a yacht based at the Brittany/Normandy port of Saint Quay Portrieux. This harbour has a long fishing history and has created recently a huge pleasure boat harbour with the capability to allow boats to enter and leave at all states of the tide. This is no small feat as the tides and the currents in this part of the world are impressive, and the attrition of unwary boaters is heavy.

Hence it is a requirement of the yacht hire company to have people with experience of yachting and/or of the area.

My companions asked me to skipper the boat as I have spent about fifty years   building, racing and cruising in yachts of various sizes including living onboard for years with a young family while crossing oceans. This charter seemed like an interesting challenge as I have always made a point of avoiding this part of the French coast due to the dangerous shoals, rocks and currents mixed with its weather patterns of fog, gales and calms.

My fellow sailors consisted of a rotund gourmand, his saleslady wife, a restaurateur from Paris who has just sold one of his establishments for a seven figure sum, and a retired beekeeper who is suffering with Parkinson’s Disease.

Our arrival at the boat was punctuated with the “clipperty_clopperty” of high-heeled shoes on the pontoon as our saleslady made an “arrival” which caused the sailors on other boats to turn and stare with curiosity at our motley crew.

We had a pile of crates of food to load onto the boat, because whatever else we might lack, with a Gourmand and a top Parisian Chef on board, we were not going to lack nourishment!

We had a meal ashore that evening and discussed our programme for the week, which was an ambitious one. We decided on a ‘day-sail” for the first day so that everyone could become accustomed to the boat and the movement at sea, and for me to see who knew what, and who was going to get seasick.

The area off shore of Saint Quay Portrieux is dangerous because of the vast areas of rocks which emerge from the sea at low tide. From the shore these rocks look like dragon’s teeth slowly masticating in phase with the moon in anticipation of a meal of yachts, with the saliva of the sea sucking and swirling through the gaps. As a reminder of the consequences of error there are also a number of wrecks which are marked with cardinal markers and buoys.

Our day-sail was boisterous with a mixture of fog, rain, strong currents and winds from the west and northwest which gave us the chance to tack between the shore and the reefs. All good ingredients for people who like to challenge themselves against the sea in conditions not too severe.

Our first destination for the following morning was St Malo, chosen by me mainly because of the phase of the currents due to the Spring Tides and the way the wind was expected to change during the day.

“But,” I warned them, “It will mean that we have to leave early in the morning!”

They nodded in acquiescence, but were unprepared for the engine starting at 0530, so I was greeted with a selection of dozy faces emerging from cabins, but they settled into the rhythm of the sea. Soon as we had the sails up and the engine off and were gliding through the dawn with a two knot current helping us along through the zigzag course, past cardinal marks and coastal cliffs. The gulls came to check if we were fishing and peeled off when they saw we were going too slowly under sail to catch mackerel.

Our restaurateur prepared a meal for us that started with top grade Spanish Ham and continued through a carefully considered menu of delicacies, each intended to be enhanced by the previous course. This French Sailing is not half bad, especially as the wine was much better than grog!

Our arrival at St Malo worked out well, following the inbound course past markers and rocks. It is easy to see how the British Men of War in the past were not able to attack here, with the currents, tides, rocks and unfriendly winds. Suicide Fireships would be the only way to inflict damage, but how would they be able to pass the onshore batteries of canon?

I always have the most profound respect for the Navies of the past for the way that they navigated these waters. We have modern devices like GPS, although the ancient version on board insisted from time to time that we were closing the coast near the port of Algiers in North Africa, so I had to be a little vigilant.

It is interesting to see how the WW2 damage has been repaired in these French coastal ports and how the renovations have been done to respect the form and constructions of the past. There is still a wonderful sense of history in the narrow streets away from more modern yacht basin.

Our destination for the following day was Jersey, so our Saleslady decided that she was going to take the ferry rather than be tumbled about “like in a washing machine”. The leg across to Jersey from St Malo means circumventing the Minkies, which is a well-known graveyard of boats. It is important to chose which way to navigate when the Springtides are in effect as the consequences of an engine failure, no wind and an “on-reef current” are sure to spoil any holiday.

As it was we found that the fishing downstream of the Minkies was excellent, so we were able to enjoy Mackerel Sushi enroute, which was in delightful contrast to the BBQ’ed fish we had in St Malo. Our arrival at Jersey was difficult with the strong cross currents offshore but we made it and found a last space in the Marina for the night. I was able to introduce the crew to the joys of Guinness in Jersey along with traditional music and ambiance, three things I find so lacking in French establishments. Our Gourmand friend decided to spend the night in a local hotel with his saleslady wife and take the ferry with her to our next destination, Granville. This meant that there were just three of us onboard, but importantly for me, the chef was up to the challenge of providing meals at sea!

The winds appeared exactly as forecast the next day, which impressed and surprised me because I have become very unconvinced by the weather forecasts in central France. We sailed serenely past the other side of the Minkies to Granville which is only open at the top of the tides, so a little planning is necessary. Here the crew reassembled for an easy cruise the next day back to St Malo past the impressive island of Saint Michelle.

Our last leg back to Saint Quay Portrieux was perfect. The crew had now learned to hold a heading on the tiller to within ten degrees, which was in stark contrast to the first day when we meandered all over the sea as the compass seemed to them to work independently and in reverse to what they were doing.

We all enjoyed our week’s sailing. They learned a lot about finding and identifying obstacles and marks at sea, about compensating for currents and winds and the all important ability to live in confined circumstances and yet move around each other and share the work load and the pleasures.

I learned a few useful things as well, such as the necessity to go ashore to find a “Bonk” where they have a hole in wall from which you can extract money, and also how to tell people what to do with a “Foc” (a foresail) in trying circumstances.

I also learned some more of that important communication device: “Hand Semaphore”. This is the way in which the French change the meaning of words and expressions with hand gestures. I thought that I understood Burgundy Semaphore, but now I have found Jura and Parisian Semaphore have variations.

Will I ever master this language?

Another good outcome of the Week’s sailing is that my Parkinson’s afflicted friend has decided to come for sessions with my Multiwave Oscillator and after just three séances has declared that his back pain is much improved and that he can get up from a seated position without difficulty, and that he can now pickup his beehives again.

I hope he will continue to improve.