The Bunny Who Started a War 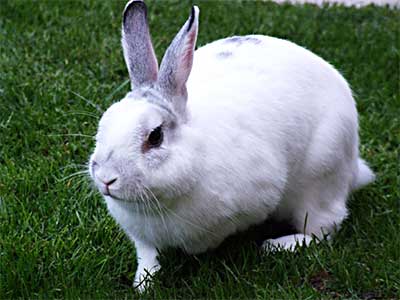 Have you ever been confronted by a small daughter asking, “ Daddy, please can I have a Bunny ? “

If so, you will have realised that there are multiple answers with multiple outcomes to this question.

For example, if you say “No”, then the delayed reaction syndrome kicks in which results, years later with the question, “Daddy, please Daddy, I NEED a horse!”

If you have been trained by previous offspring, then a better choice of answer is along the lines of, “Well possibly, in due course, but YOU will have to look after it, and YOU will have to feed it and clean up after it and.... Can you afford a cage on your pocket money?”

Delaying tactics notwithstanding, at last a Bunny arrived in the house, or more specifically, in my daughter's bedroom where it did what bunnies do, with the exception of that one most important function of bunnies, which is to procreate. Why we talk about the Birds and the Bees I don't know. Bunnies are far closer to the French concept of what is important in life in which a sexually active adult is known as a “Hot Rabbit”!

My daughter then moved into her own apartment in Dijon along with her companion, the Bunny. It was not long before she found that Bunnies out of cages can wreak havoc in an apartment which has a security deposit and edible skirting boards, so in short order we were asked to, “Please look after my Bunny for me?”

The Bunny arrived back at “Chez Parents” and was allowed to run in the garden, because at that time I was not growing vegetables, only dahlias and geraniums, which bunnies don't like. The Bunny by this time was a Bunny who could make up his own mind about what was important in Life, so he disappeared.

Not a great loss as my daughter was otherwise occupied with studies, work and the freedom to make her own decisions.

However the story of the Bunny was not over. We heard on the village grapevine that somebody had been stealing 'salads' from a neighbour's garden, not by pulling them out of the ground, but by pulling all the leaves off. The owner of the lettuces was very disturbed because his vegetables were the only thing that he had control over, as he hadn't worked for decades after the closure of the local ceramic factory many years before. His vegetables were always planted in neat rows and they all did well, with the exception of his cabbages which always died. He had no explanation for this and discussed this phenomenon with anyone who would listen.

The problem is, everyone knew what the problem was, except him: His wife watered his cabbages with bleach! This was for two reasons. The first was that she didn't like the taste, smell or texture of cabbages and the second was that she was punishing her husband for an extramarital relationship that she thought he had forty years before. How this punishment was supposed to make him change his ways when he didn't know about her suspicions and also didn't know what she was doing, is difficult to relate.

One day, perhaps after seeing a Nature Programme on television, he realised that the culprit was not the local village idiot, but a rabbit, because the Bunny had left droppings on the path!. And that WE were to blame, because my wife had been asking the neighbours over the last few weeks if anybody had seen a rabbit. A lost rabbit and a very distantly loved rabbit.

Marlene had to admit that the rabbit must be our rabbit, because every other small edible mammal in the area is extinct due to the over zealous efforts of the local hunters.

She said, “Monsieur Chavey, if you can catch the rabbit, then you can have it!”

This was a challenge that appealed to the long dormant instincts of this sedentary seventy year old  and was perhaps one of the most exciting things in his otherwise mundane life. The only problem was that the rabbit had taken up residence in his neighbour's hedge. He approached his neighbour, Monsieur Cendrier for assistance, which was a mistake, because Monsieur Cendrier had a visitor with him who played amateur rugby.

The rugby player approached the hedge and spied a likely hiding place of the Bunny, and launched himself at it with all the enthusiasm of player seeking glory in the National Team. He grabbed the Bunny which lashed out with its back legs and scratched him on the forearm. He maintained his grip however, but now there ensued an argument as to whose rabbit it was.

Marlene stumbled on this scene on the way to get a baguette from the baker. The 'animation' was attracting a small crowd of people who were normally not seen from from week to week as they usually cowered in their houses, as agoraphobia is common in French villages  among neighbours who don't like each other.

A judgement had to be made, so she said, “Why don't you SHARE the rabbit?”

This was a totally unexpected  concept, but one that nobody could find an objection to, on the spur of the moment.

“And I will give you each a bottle of wine for your troubles!” she added.

That swung the deal and a new era of peace and harmony broke out in the village which lasted for at least three hours, by which time the rabbit had been prepared and the wine consumed, and after which everyone returned their old jealousies and antagonisms, with which they were far more comfortable.

My daughter pretended sadness and anguish, but only to lay a claim to one of the family cats to accompany her to Dijon, because cats don't eat skirting boards!

Monsieur Chavey's cabbages continue to fail each year, but this may change because recently his wife died and so if he has the energy and motivation to continue gardening, he may well find that his cabbages thrive and grow for the first time in forty years.

Monsieur Cendrier continues to garden his vegetables, but only when his neighbour is indoors, so that they don't have to greet each other.

And as for me?

I am planning to release a dozen Bunnies on the village, just to see what will happen!