The Liberation of St Jean-de-Losne 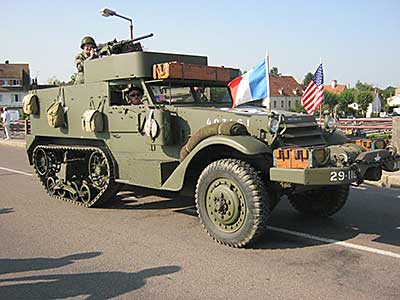 We have long thought of French as being two distinct languages: the “written” one and the “spoken” one.
For example, Pastis and Paris both end in “-is” but one is pronounced “-isse” and the other “-eee”.

The French love it when we complain about these difficulties because it confirms what they have always thought and that is that everyone who doesn't speak French is somewhat retarded.
“After all,” they say, “even a three year old French child can speak French!”

However this week we discovered how difficult it is for French people who do not speak English at all, to sing in English.

The occasion was the annual celebration in Saint Jean-de-Losne (pronounced John-der-Lone!) of the liberation by the Americans and Allies of the town towards the end of the Second World War. In order to introduce a sense of realism into the proceedings a couple of individuals were dressed in German Army uniforms and were “shot at”by an erstwhile looking member of the “Resistance” who was dressed complete with beret and coal-dust sideburns, to give him a sinister appearance. One of the German actors collapsed in the street from simulated gun-shot wounds, to loud applause from the on-lookers and the other was “arrested” and marched away.

The “wounded” German was then tended by nurses in period uniforms from an authentic WW2 ambulance. The parade, complete with two bands, then marched around the town with a convoy of vehicles ranging from American tracked artillery pieces, armoured personnel carriers to a motorised tricycle with a chicken coop driven by a beret wearing Frenchman in a stripy jersey but no necklace of onions.

The parade then paused at the town's War Memorial where flags were raised and banners were dipped to salute the Fallen, and the town choir sang the French National Anthem. Then to honour the Allies in the war, the small British contingent was to sing “God Save the Queen”. There were very few of us because this is not an area of France where many British ex-pats live. So to bolster our efforts the town choir had taken the trouble to learn the British National Anthem in order that we should not be embarrassed, but the problem was that none of them could speak, let alone sing, in English. So the choir had rehearsed a French phonetic version of English of the First and  Third verses of the British National Anthem, which I have added below, because not many British people know the third verse, and you never know when it might be useful to know it

Singing God save the Queen