Doing the Doo by Canoe 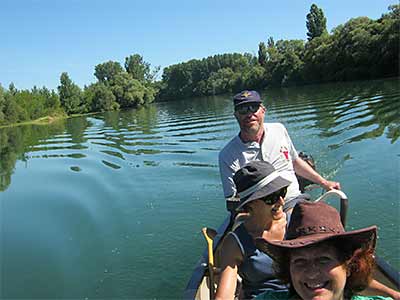 It is a rather special river because it goes alongside and feeds one of the most attractive canals in France which joins the Rhine and the Saône rivers, and so it gives water-borne traffic the possibility to travel from Switzerland and Germany to the Mediterranean. However at the beautiful town of Dole the river and the canal part company and the river continues through almost deserted countryside until it joins the Saône at the picturesque town of Verdun-sur-Le-Doubs.

It was this part of the Doubs that we had the special opportunity to explore under the guidance of a skilled canoe instructor whose profession is leading and training Royal Air Force pilots in Fast Jets. A canoe is hardly a Fast Jet, but it can seem to speed along rather effectively when there are rapids  with overhanging trees!

It is worth noting that for this fifty kilometre trip we only saw one family fishing from a sandbank and one curious pedestrian staring at us as we passed under the bridge on which he was standing. As we passed under him I called up, “Is this the way to the Victoria Falls?”
But I only got a blank stare in return. Otherwise we had the river to ourselves and only shared it with a selection of rare birds and trout.

There is a sense of adventure when you cruise down a deserted river and it reminded me of my explorations on the Umfuli River in central Africa, which was populated, in those days, with an interesting collection of crocodiles and hippos. The Doubs only has grey herons and catfish as serious predators not to understate the colonies of European Bee Eaters.

We started downstream from the picturesque town of Dole from which we estimated a fifty kilometre cruise to Verdun. The river was exactly at the right flow rate to give us a speed of about seven knots over the smooth shallow parts and a gentle push of a couple of knots across the deeper pools along the way. There was only one section of exciting rapids which our experienced navigator guided us over without any difficulty.

Our methods of propulsion were three: firstly conventional canoe paddles in the style of Canadian Explorers, then two umbrellas which had the dual abilities to be either sailing spinakers for a following wind, or sunshade protectors in the event that we should become becalmed, and a small four-stroke single cylinder outboard for use where the river is deep and the flow very slow.

As it turned out, all these pieces of equipment were useful at different stages, as was the picnic lunch with beer, wine and corkscrew. As yet there are no requirements for breathalysers for travellers on the River Doubs, in canoes, however you need your wits about you as there are whirlpools and dangerous currents which can sweep you into hazards.

The problem with navigating this river is that when the flow is too low is that there would be numerous gravel banks over which it would be necessary to carry the canoe. This is why it is not an overpopulated section of river. The flow has to be just right. But when it is, what a pleasure!

Every turn brought a new view of nesting European Bee Eaters, or a family of Kingfishers, or a small battle between a Grey Heron and a White Heron arguing about fishing rights. Curious cattle surveyed us from the banks and trout jumped out of the way, shocked that what they thought was a floating log suddenly sprouted paddles and umbrellas.

Our arrival at Verdun-sur-le-Doubs was watched by a collection of people on cruisers who must have wondered at this curious contraption with engines, paddles and sun pickled people. But they could never have guessed at the fun we had experienced having the river all to ourselves for fifty kilometres through the centre of France.