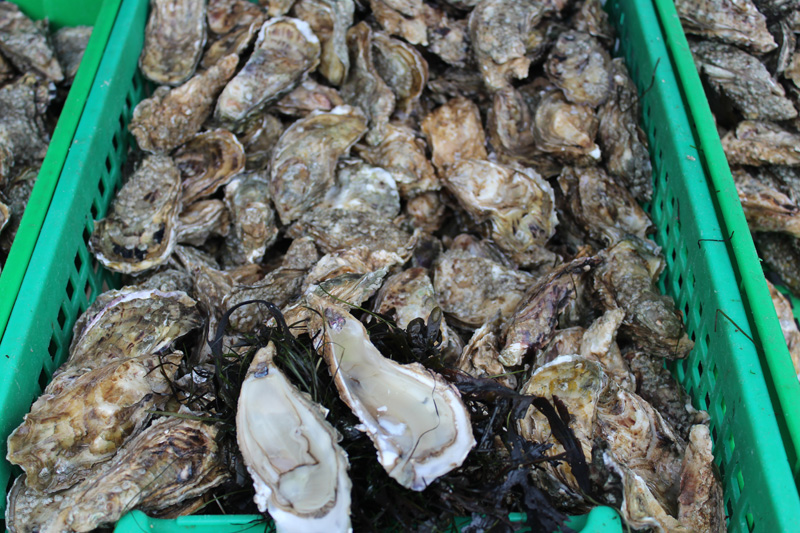 France is the No. 1 consumer and exporter of oysters in Europe producing 150,000 tons every year.

King Henri IV (1553-1610) was said to eat 300 of them at a time, his grandson Louis XIV had them delivered fresh daily to Versailles or wherever he was and was known to eat six dozen at a time.  Diderot the French philosopher and Voltaire the writer and philosopher ate them for inspiration, as did Napoleon Bonaparte before going into battle. Casanova, the 18th-century lover used to breakfast on 50 oysters.

To this day the French still can’t get enough of them and they are the food of choice at times of celebration like Christmas and New Year – around half of all oysters eaten in France will be eaten between these two festive dates.

98% of oysters are cupped but they can also be flat (called plats) – and much more expensive.  They are ranked for size by number: from 0 to 5 for cupped oysters and from 000 (the biggest) to 6 (the smallest) for flat ones.  Cupped oysters are designated “fine” or “special” which indicates the amount of meat, with special oysters being the meatiest ones.

How to eat oysters

Oysters are almost never rinsed which is to help preserve the flavour. You’ll find them on sale in supermarkets, poissoneries, and at street markets, kept on ice and often beautifully displayed (like these above at the market at La Fleche in the Loir). In restaurants too they are generally served on ice to keep them fresh. Take an especially small fork, gently pry the oyster, squeeze lemon or mignonette sauce, made of chopped shallots and red wine vinegar in the shell, or go au naturel and slurp it back in one gulp.

French for oyster is huître – pronounced wee-tra (without the h).

Oyster bars are known as huiteries and you’ll find them in all major towns.

Normandy Oysters: Known for its highly iodised and fleshy oysters. Fans may have their favourites such as the special oysters of Isigny, tasty and pulpy, and those of Saint-Vaast, which are known for their nutty flavour. Utah Beach is said to produce sweet oysters.

Brittany Oysters: Cancale, Saint-Brieuc, Morlaix and the Bay of Brest are all well-known for cupped and flat oysters; most of the small amount farmed are from Brittany.

The Cancale oyster is farmed in the shadow of the Mont Saint-Michel and has a firm and salty flesh.

The Paimpol deep-sea oyster, raised in farms far out in the bay, is deliciously juicy and plump.

Another Brittany celebrity is “the Belon”, whose appellation designates three Brittany estuaries on the south coast of Finistere where the coastal seawater mixes with freshwater from rivers and springs.

The oysters farmed around Quiberon and in the Gulf of Morbihan in southern Brittany grow in richly fed tidal streams and have a distinctive and energising flavour.

Marennes-Oléron, Charente-Maritime is the most extensive oyster farming area in the world with the advertising slogan “Matured in Marennes-Oléron and nowhere else”. The ancient salt marshes which form the oyster beds give an aroma and sometimes a special hue to the oysters.

Arcachon Oysters:The Arcachon Basin (Aquitaine) has been producing wild oysters since days of old. Today it has become an important breeding centre, supplying spats (oyster larvae) to most of France’s oyster-farming basins. The baby oysters suction onto terracotta tiles placed by the farmers and are then placed in sacks to continue growing.

French Connections has fabulous rentals in all these areas – so why not check them out and va va voom to France and enjoy oysters fresh from the water!