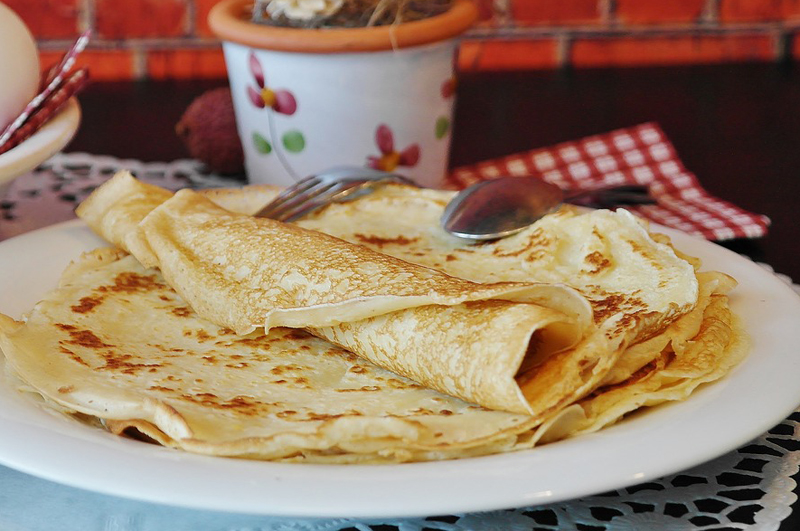 Every year on 2 February the French celebrate with a crêpe (pancake) for the Fête de la Chandeleur (pancake day in France).

The name Chandeleur (French pancake day) comes from the Latin candelorum festum, which means festival of candles and in the English language, it’s known as Candlemas. There is evidence that Pope Gelasius I (died in 496) helped to establish the festival of Candlemas and was said to have fed crêpes to the pilgrims who visited his church.

There are lots of fun legends and old wives’ tales about La Chandeleur and Candlemas:

If you can flip a pancake with one hand, whilst in the other holding a gold coin – your immediate family will prosper financially all through the year! Or flip and hold a coin and make a wish – catch it and your wish will come true!

Eating lots of pancakes on the day of the fête de la chandeleur will ensure a good crop!

If you toss your crèpe on the armoire and it sticks – that is a sign of good luck and prosperity for the year (or a sign you need to get a cloth out and clean up!).

In the north of France, it’s traditional to use beer in the mix whilst in Normandy and Brittany people often add a swig of Calvados (apple brandy).

Wherever you are, it’s a good excuse to make pancakes and here’s a traditional and simple French crêpe recipe:

1. Mix the flour and salt in a basin, make a hollow in the centre and drop in the egg. Stir and add the milk gradually until you have a smooth mix. Add the melted butter and beat well. The consistency should be like single cream.

2.  Heat a small amount of butter in a frying pan until it begins to smoke. Then give the batter a stir and pour approximately 3 tablespoons of the mix into the frying pan. When golden brown underneath, flip it over and cook the other side.

3. You can serve your pancake as you like but it's traditional to sprinkle it with sugar and roll it or fold it into quarters. Serve immediately with honey, jam or lemon juice.

Bon appétit from us at French Connections!