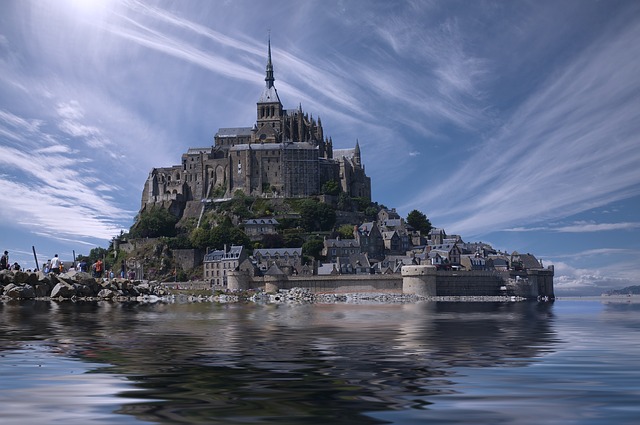 Almost at the point where Normandy meets Brittany at the water’s edge in the Manche region of northern France, you’ll discover one of the wonders of the world.

The region has 355km of coastline, the largest network of country roads in France and several truly spectacular must-visit locations.

Utah Beach, where the American troops landed on D-Day, on 6 June 1944, is now home to a magnificent museum with its very own B26 bomber plane.

Saint-Lô in the heart of the Manche has a terrific market, and horse-lovers are sure to enjoy a visit the town’s National Stud.

Granville, the “Monaco of the North”, is a bustling seaside resort with marina and fishing port, rock pools, and sandy beaches plus an 18-hole links course. Christian Dior, the great French designer, was born here and his birthplace with haute couture exhibition, rose garden and tearooms are open to visitors in the summer months

And La Manche is also where you’ll discover an ancient abbey on a tiny island in the English Channel that looks like a dream of a fairytale village.

This incredible island, with its wiggly, wobbly cobbles roads that wind around and up like a giant stone helter-skelter, topped with a majestic abbey, leaves most visitors speechless. In 708 AD, the Bishop of Avranches dreamed that the Archangel Michael told him to build a church on the little island, just off the coast at the mouth of the River Couesnon. Over the next few hundred years, monks settled in the abbey and a village started to take shape. By the 14th century, it looked much as it does today. It was and still is, on the pilgrimage route, but more so on the tourist route and can get very busy in peak season.

Streets lined with medieval houses, cafés, and shops, views over the bay which has the highest tides in Europe and the incredible abbey make Mont-Saint-Michel one of the most popular landmarks of France. The climb to the top is not for the faint-hearted or those with disabilities, it’s steep and long, and generally less crowded as 2 out of 3 visitors give it a pass. But if you make it, you’ll be rewarded with the most amazing views and a tour of a fascinating building.

Park your car in the designated car park, take the shuttle bus, horse, and cart or 45-minute walk over to the island. Despite the hordes of tourists at peak visiting times, Mont-Saint-Michel really does live up to the hype.

French Connection has loads of fabulous holiday rental homes in the Manche area from a gite at a chateau to a bijou bakery, cottages, farmhouses and more… we love making your holiday dreams come true