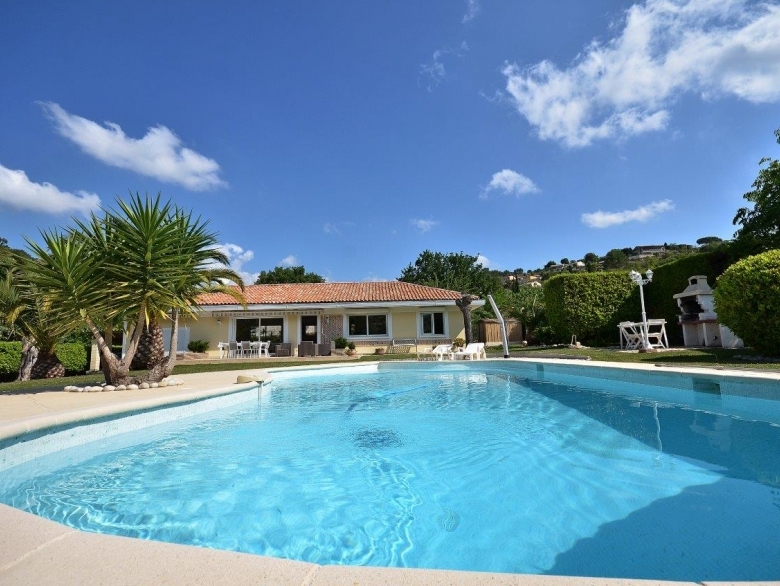 Shapely private pool with villa in the background (1 / 30) 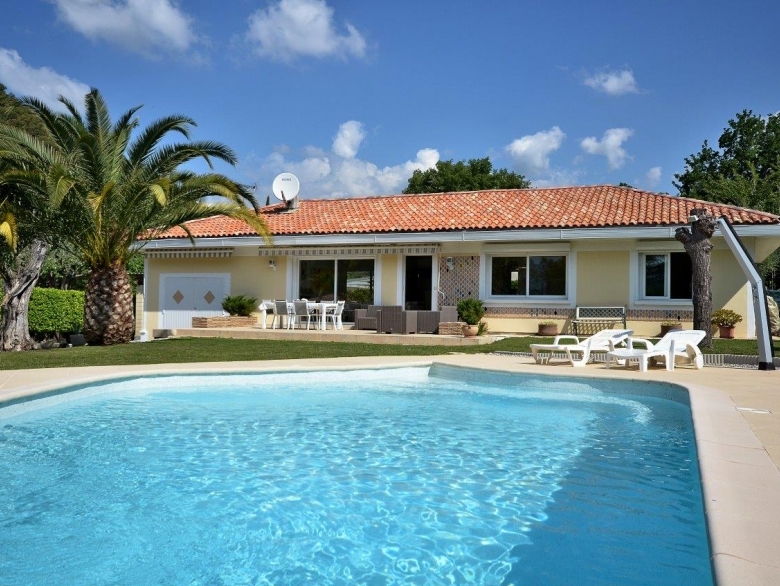 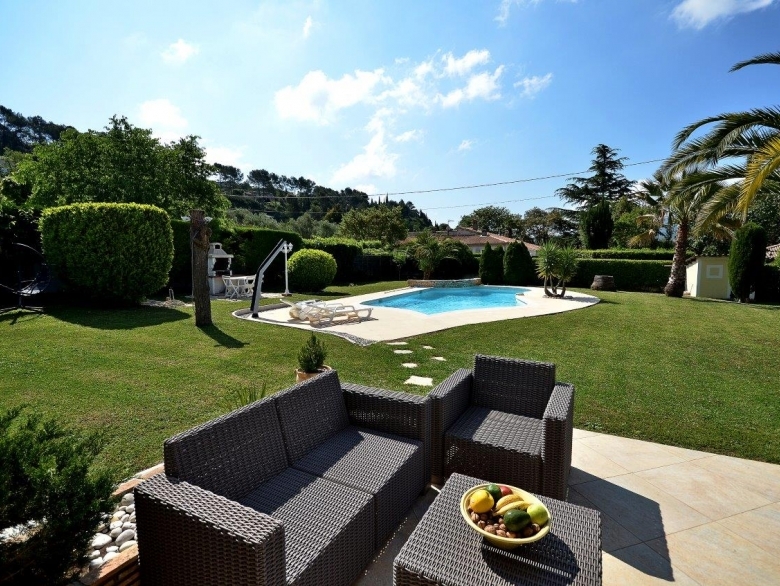 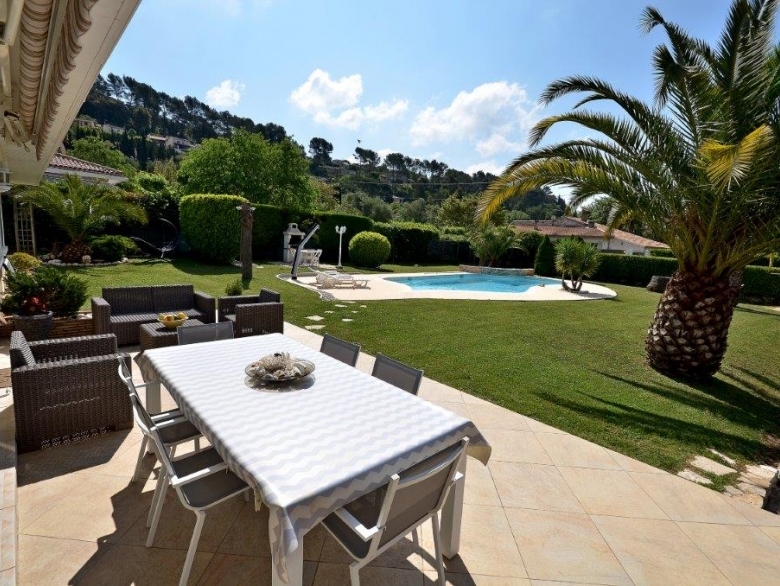 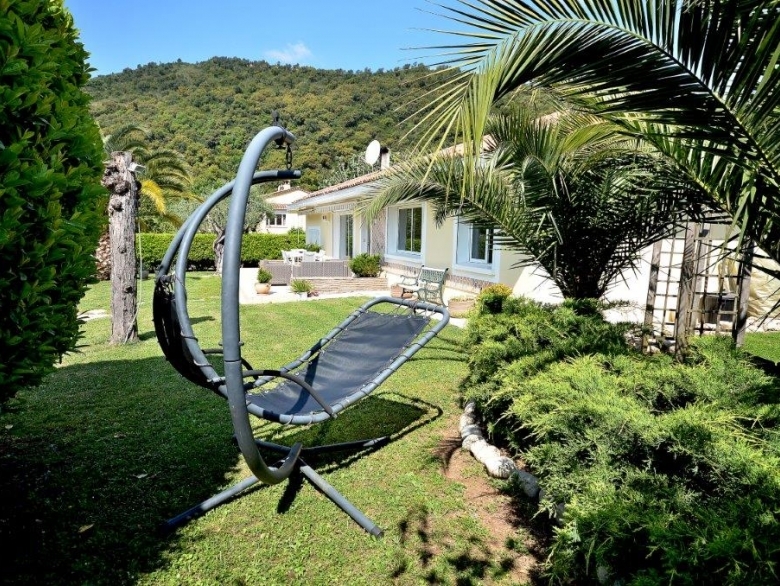 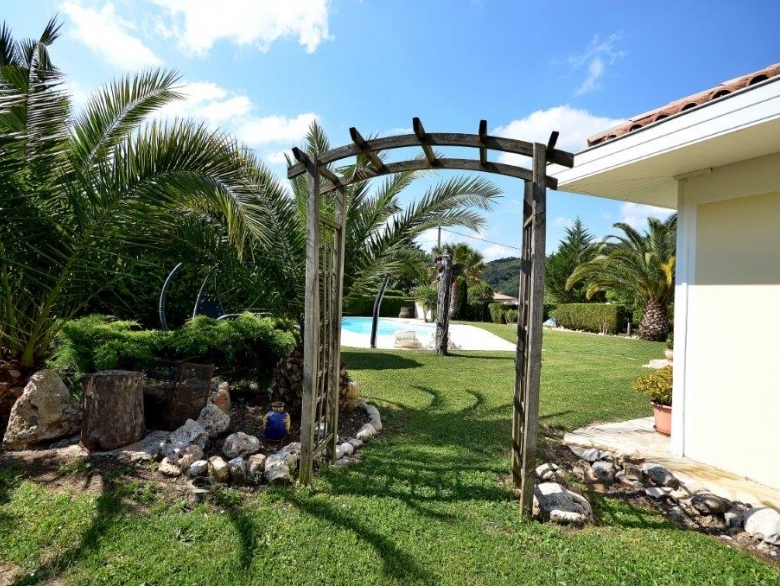 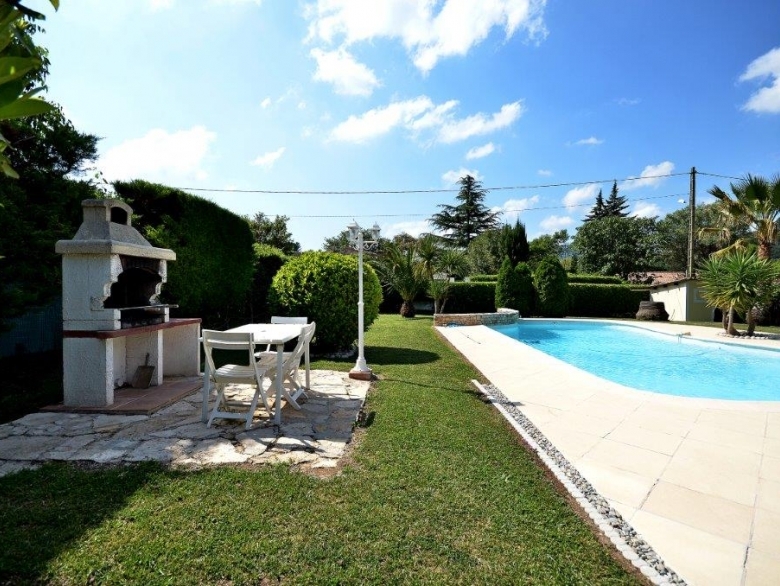 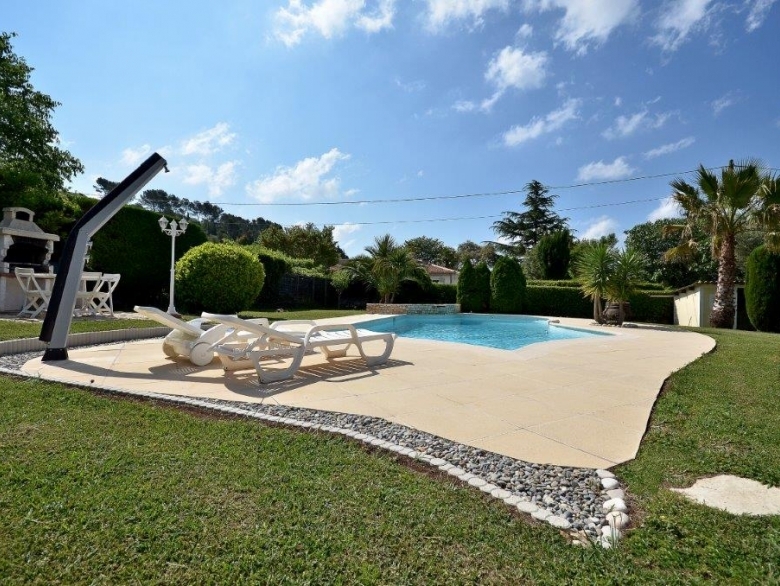 Pool with sunloungers and solar shower (8 / 30) 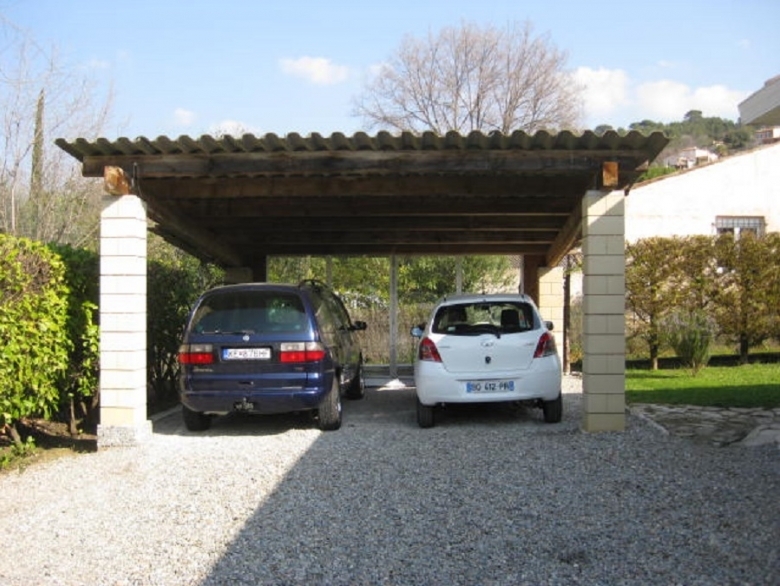 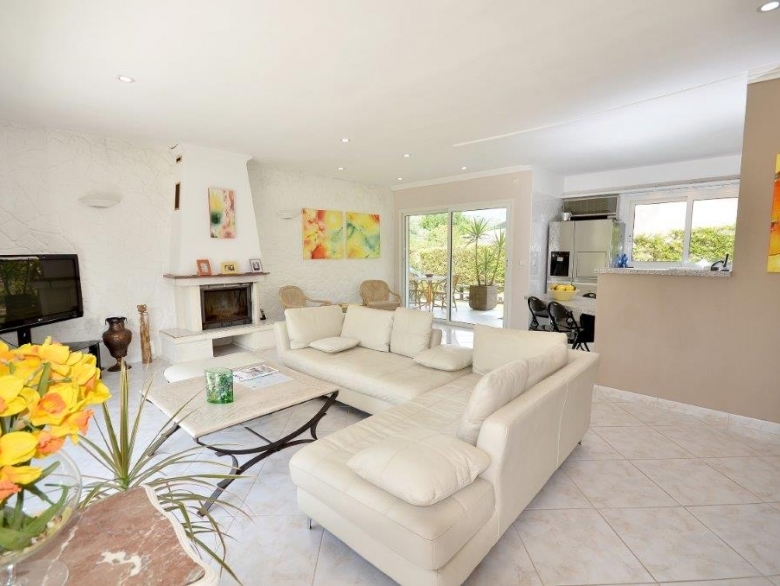 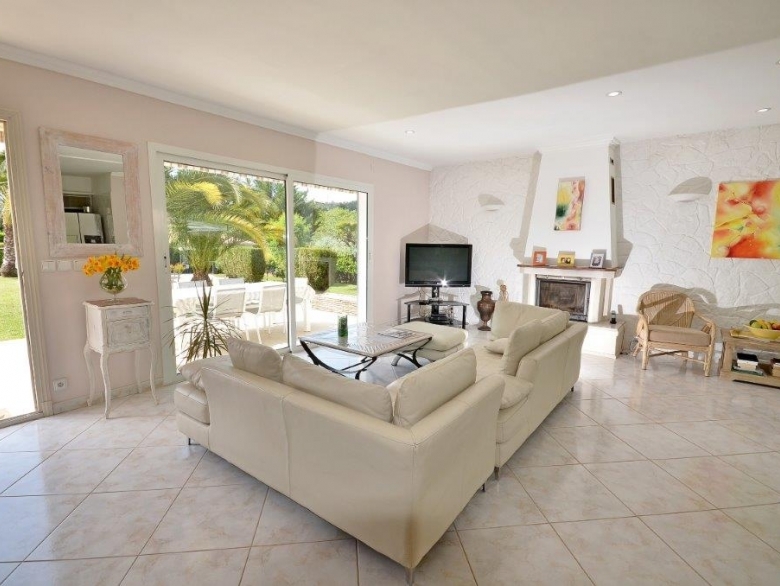 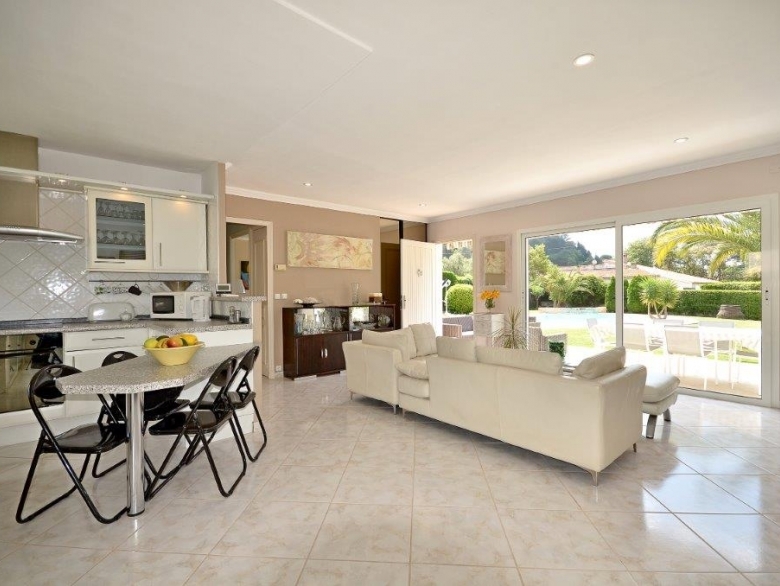 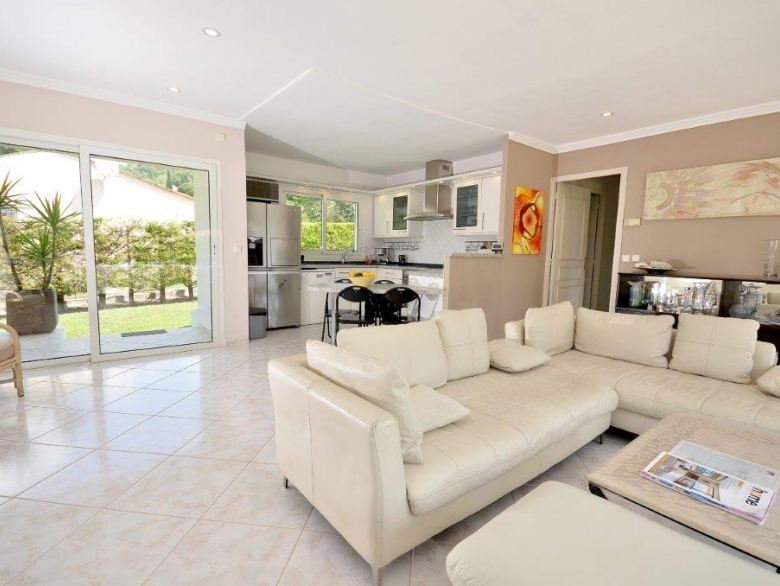 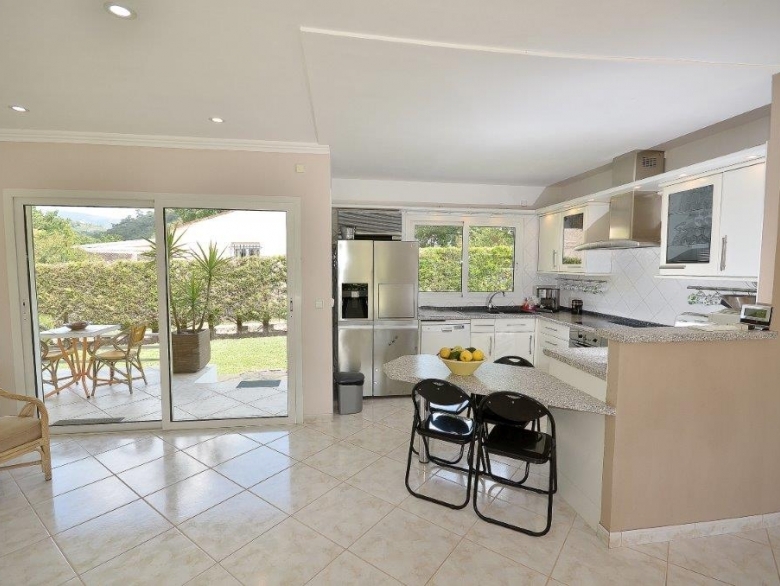 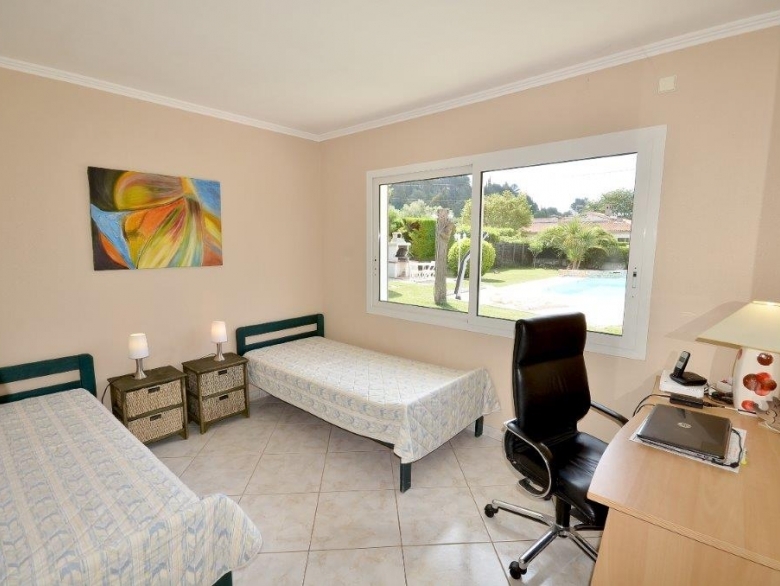 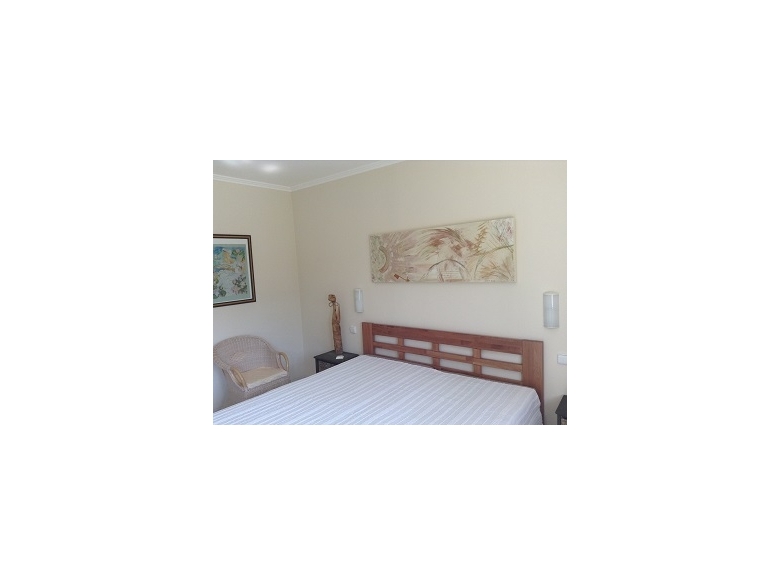 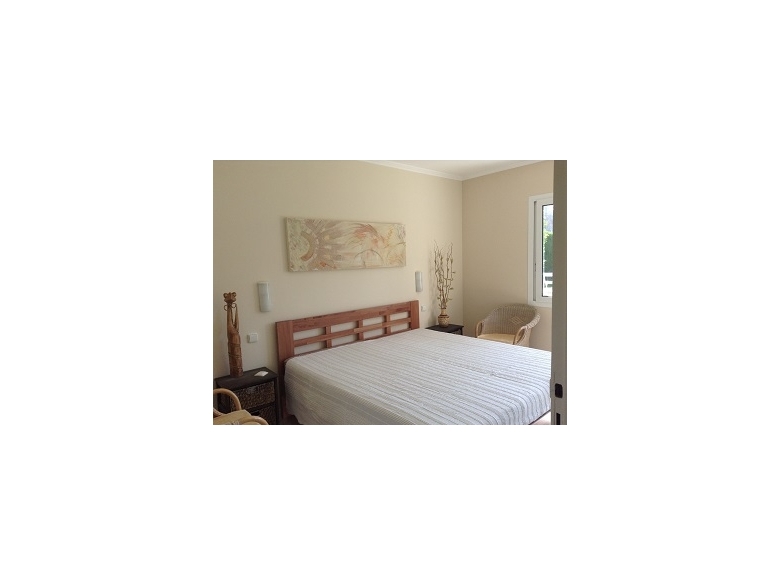 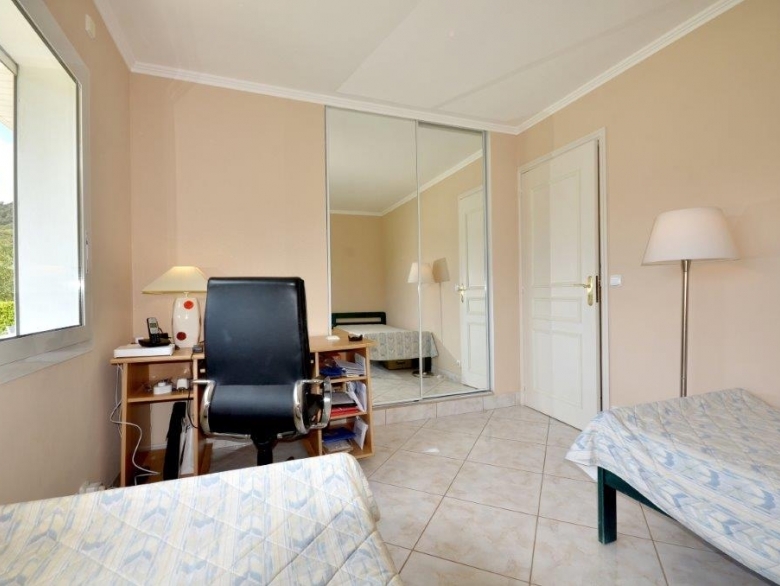 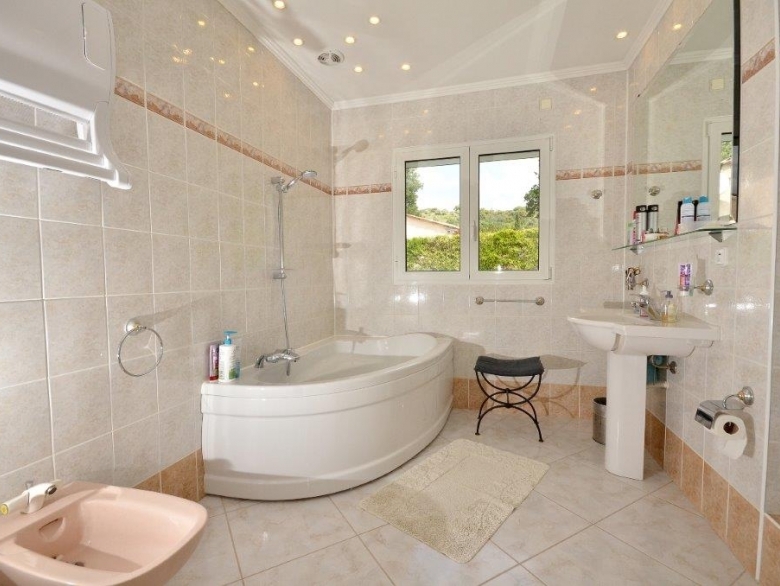 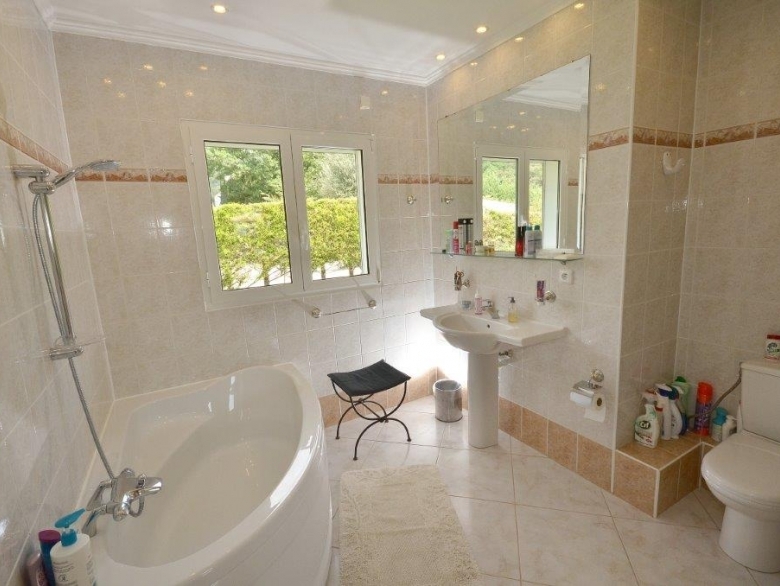 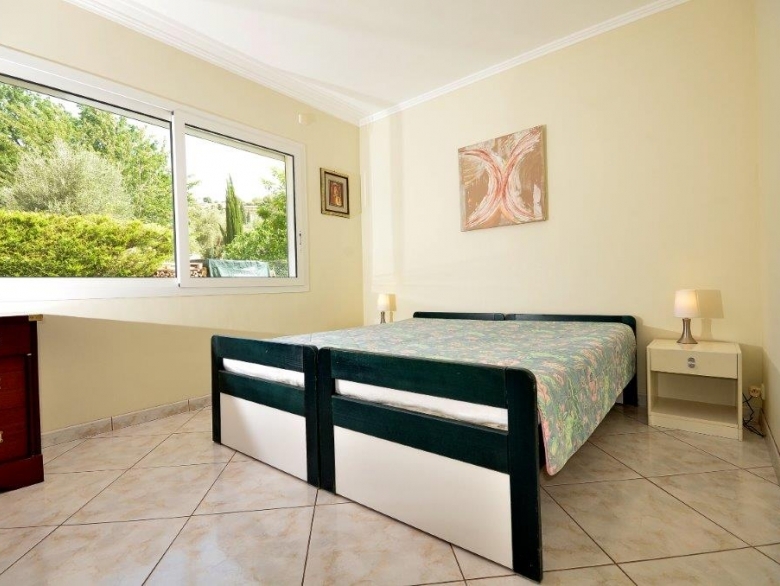 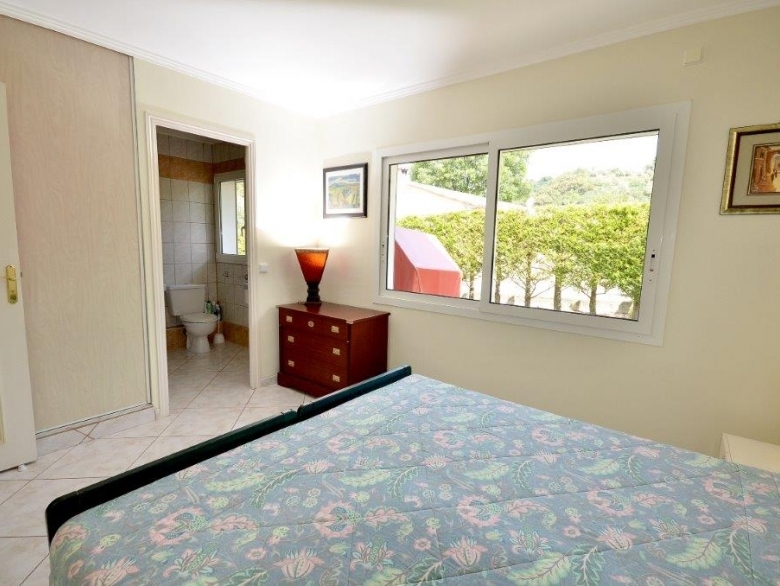 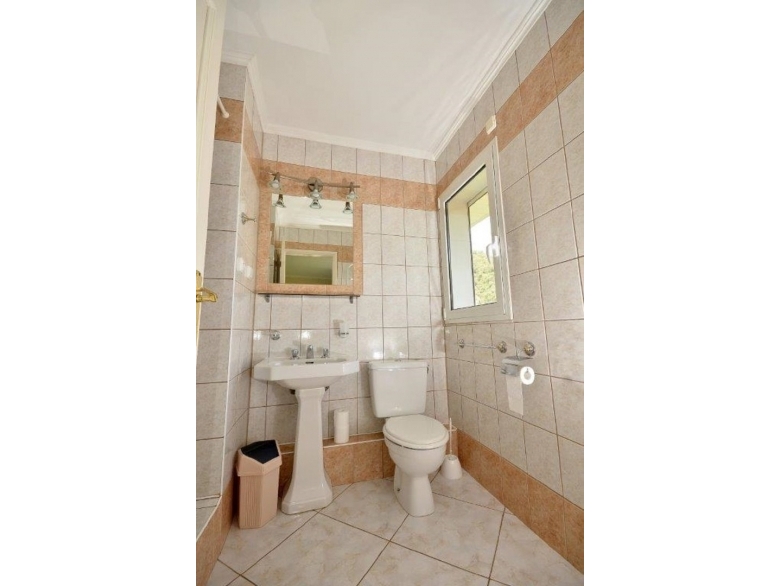 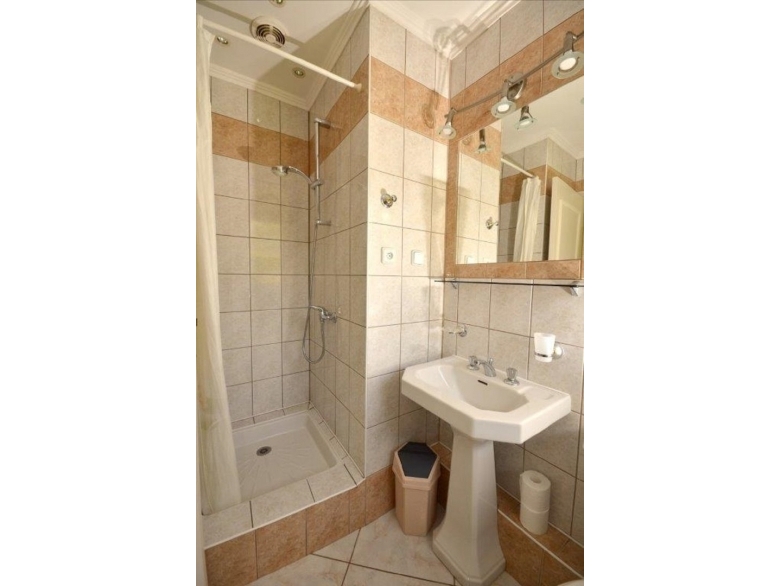 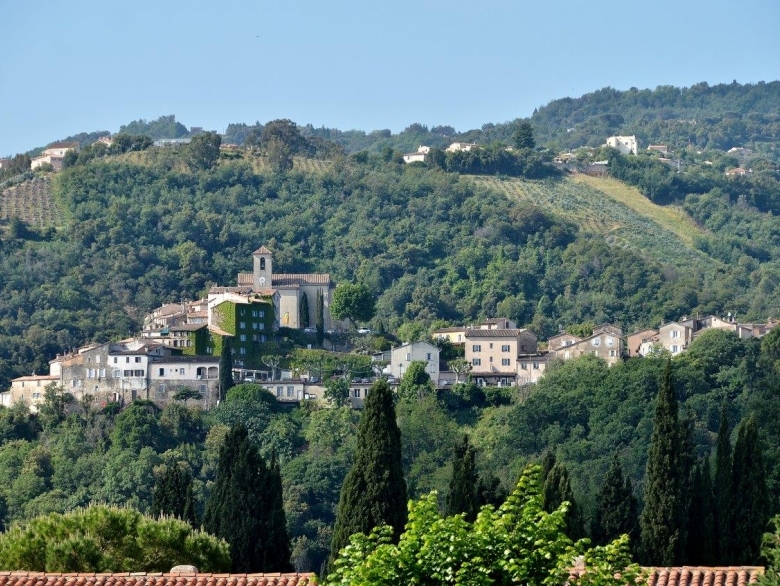 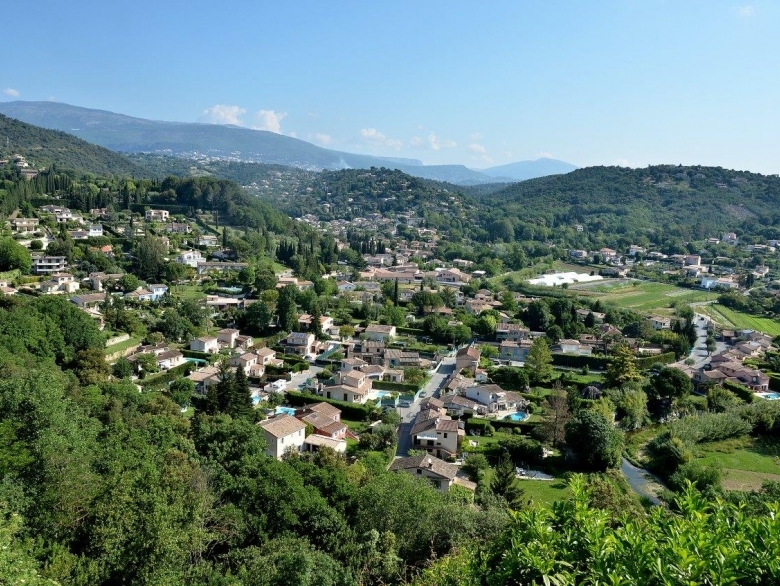 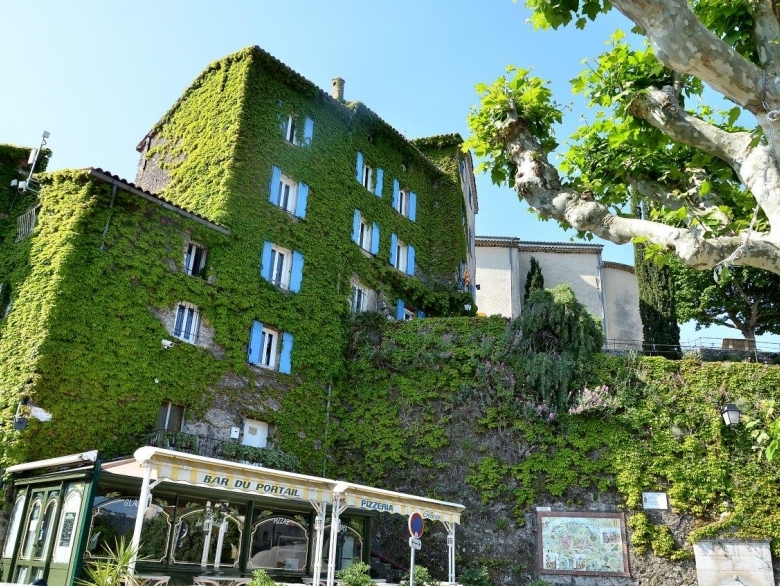 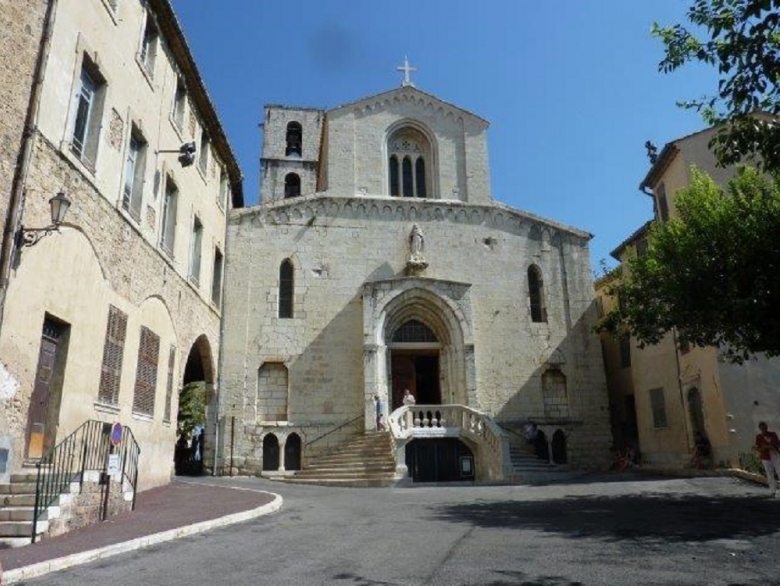 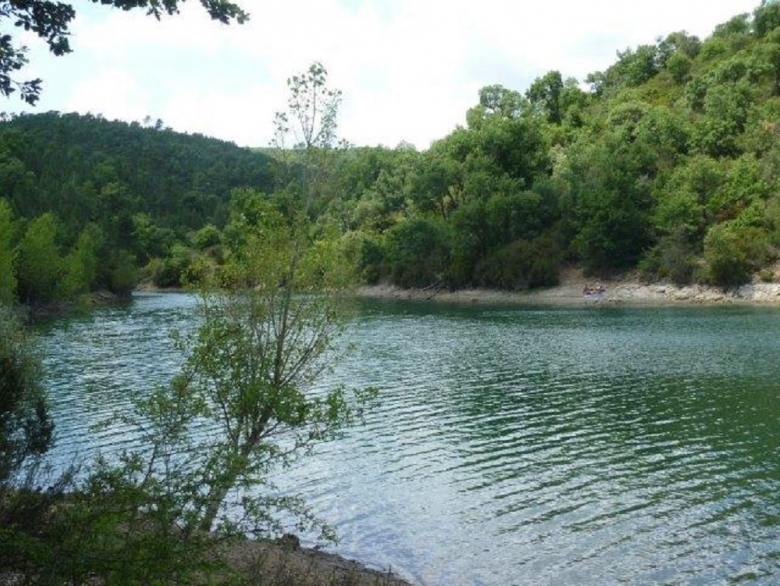 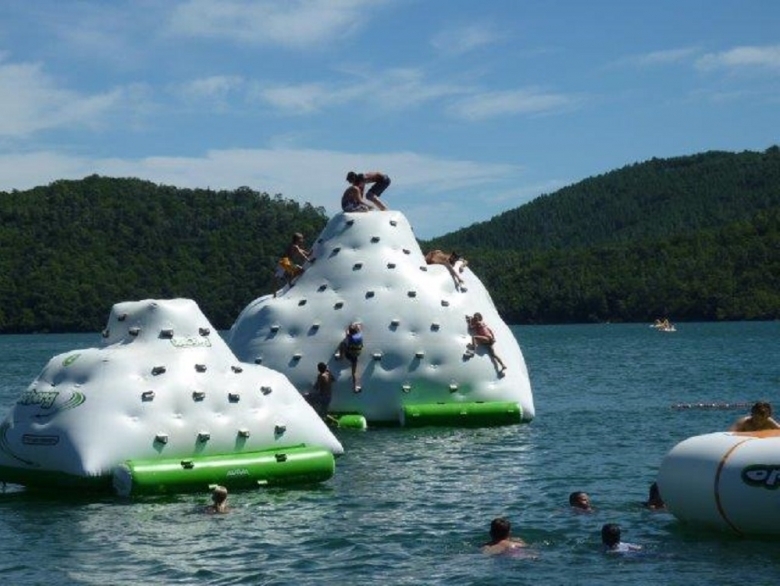 The perched village of Auribeau sur Siagne is set at the entrance of Gorges de la Siagne river. The village itself is very picturesque. The beauty of this location is that it is off the beaten tourist track and is cool and peaceful in the summer, yet it is only 12km from the glitzy town of Cannes and 25min from the sandy beaches.

Auribeau itself is a pretty village with lovely little streets, an 18th Century church right at the top, from which point, you can admire the superb views of the surrounding country, including the Tanneron mountains, the Pre-Alps of Grasse, the Peygros forest, the “Pic de Courmettes” and the plateau of Valbonne. From the village you can walk down to the river but bear in mind it is pretty steep walking back up!

Auribeau sur Siagne is a great base for visiting local towns, villages and the beaches of the Cote d’Azur. Villa Milena is close to Cannes 25min, Antibes 40min, Frejus-Saint-Raphael 45min and also within easy reach of Nice city centre at about 50 minutes’ drive.

GRASSE: 6km – 15min. Grasse is famous worldwide for its perfumeries and is often hailed as the perfume capital of the world! It even has a Museum of perfume. Grasse is a fascinating old town with pretty streets, squares full of life, numerous shops, restaurants, a daily market and a magnificent Cathedral. Grasse gets quite busy especially in August during the festival called “Fete du Jasmin” where you can see floats driving through town throwing flowers into the crowd. Known as the “Bataille de fleurs” (flower battle), onlookers get soaked by their natural perfume. During the event there are fireworks and dancing. If you are looking for something a little different why not visit the caves and grottos built into the porous limestone hills north of Grasse, most of them 4km north rising up to the “Plateau de Caussols”.

CANNES: 9km - 20min. One of the unmissable jewel of the Cote D’Azur with sandy beaches and large promenade “Croisette”, chic boutiques, classy restaurants, bars, shops and numerous festivals throughout the year, including of course the Cannes Film Festival in May each year.

FREJUS, SAINT-RAPHAEL: 40km - 45min from the beaches. Frejus is an ancient military port and Roman city with a rich historical and architectural heritage. You will find some superb Roman remains including a Roman theatre still used for various summer events and one of the largest amphitheatres from Gallic times.

There is a lot to do in the area and you will be spoilt for choice so here are a few more ideas!

Day trip to the nearby islands called 'Iles de Lérins', a group of four Mediterranean islands opposite Cannes. There are departures from Cannes every 30 minutes and the crossings only last a few minutes. The islands are very scenic with fantastic views, pine and eucalyptus fragrance, unique plant species and the Fort Royal, the former residence of the Man in the Iron Mask!

Treks in the Trayas: 25min drive.

Numerous villages within an hour’s drive: Saint Paul de Vence (50min), the village of Gourdon and its magnificent panoramic views (50min) and the perched Medieval village of Mougins (20min) where you can find numerous traditional or gourmet restaurants, art galleries and photography museum, automobile museum and a local history museum.

AURIBEAU SUR SIAGNE: 2km – 5min. The small village of Auribeau sur Siagne is very picturesque with many houses covered in climbing plants and flowers. Whilst the village is very up and down it is worth a visit.

MARINELAND ANTIBES: 32km – 35min. (next door to Aquasplash). Animal exhibition Park with possibly the greatest marine show in Europe including orcas, dolphins, killer whales, seals and a 30m long tunnel where you are surrounded by sharks. A real thrill for the whole family and a great day out!

Auribeau Sur Siagne on the map

How to get to Villa Milena

Compulsory cleaning charge of 150€ payable in cash on arrival.

Security deposit: 800€ payable on arrival and refunded on departure once an inventory has been made.

Additional cleaning and babysitting available on request and at a supplement.

Included in the rental rate:

Bed linen and house towels (not pool towels). For two week stays or more a change of bed linen and towels is provided.

Cot and highchair available. Please ask at the time of booking.

Check-in on Saturday between 5-8pm. Late arrivals can be arranged but must be requested at least a month in advance.

No smoking in the villa.