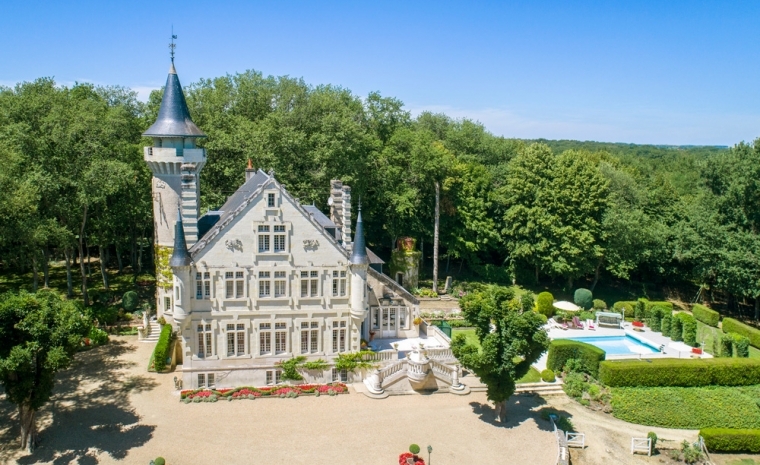 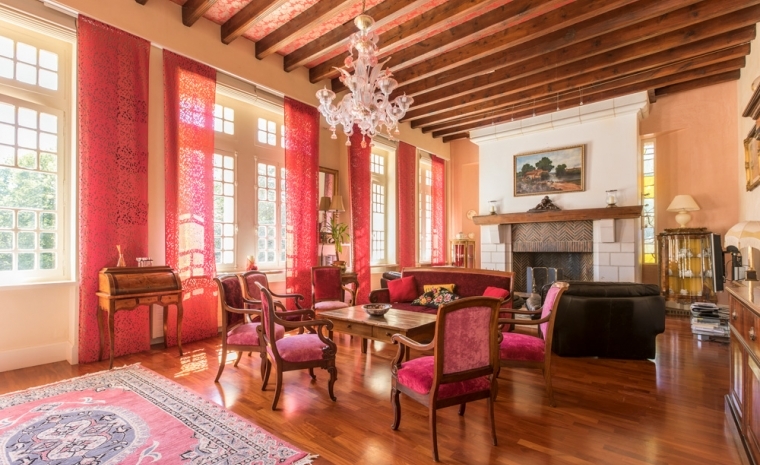 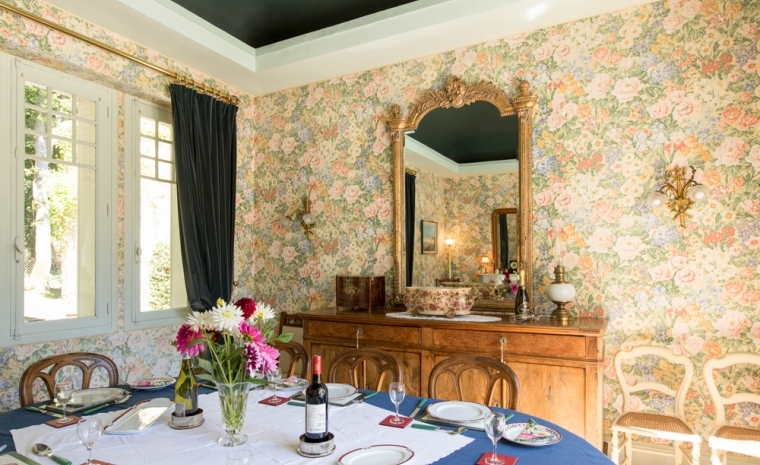 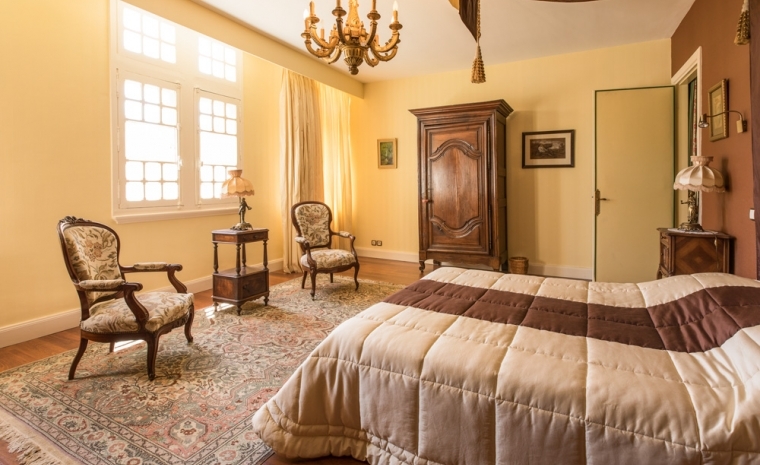 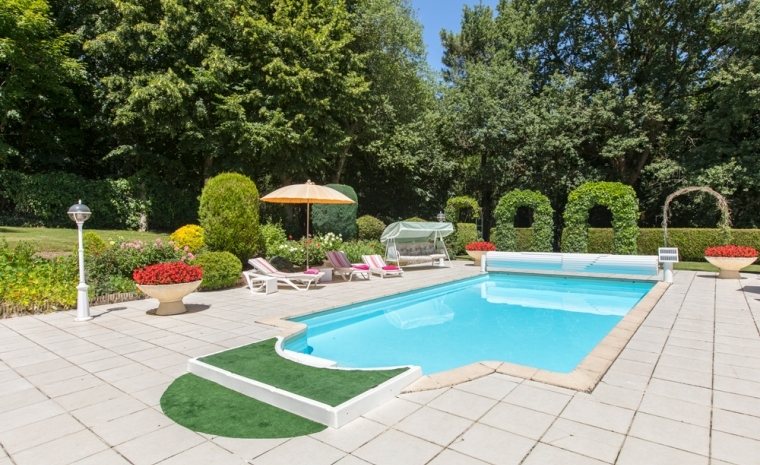 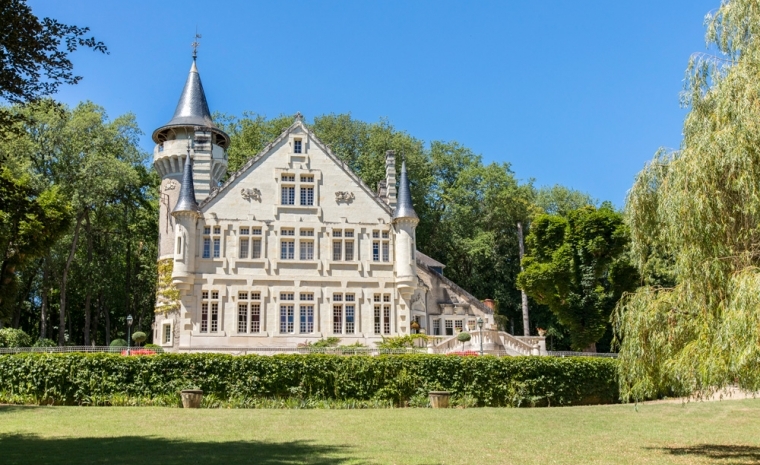 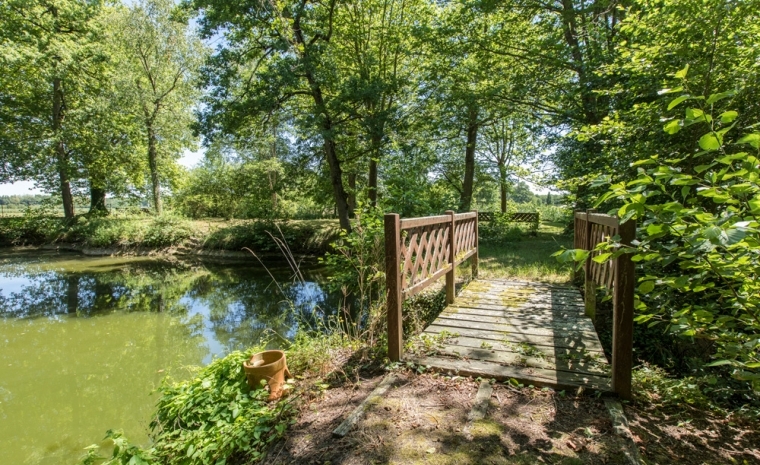 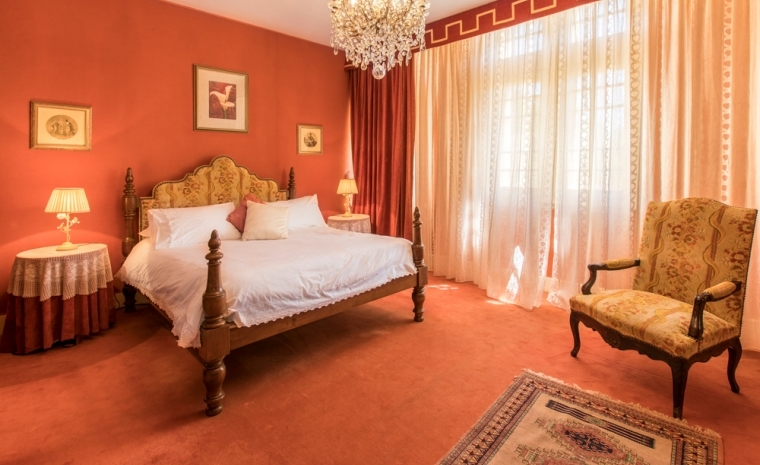 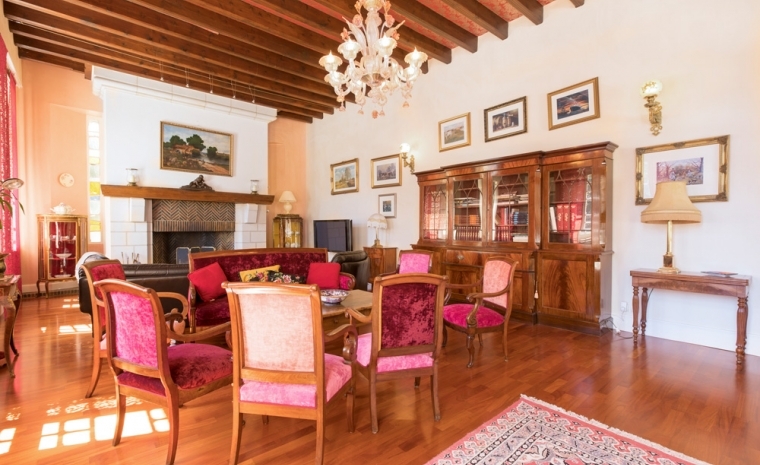 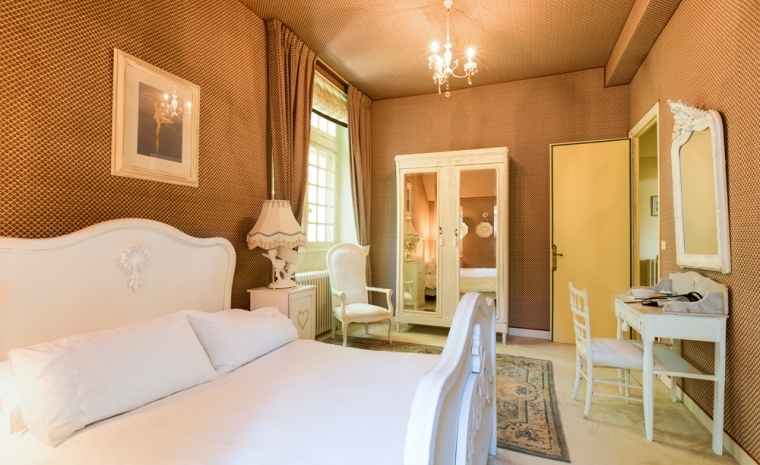 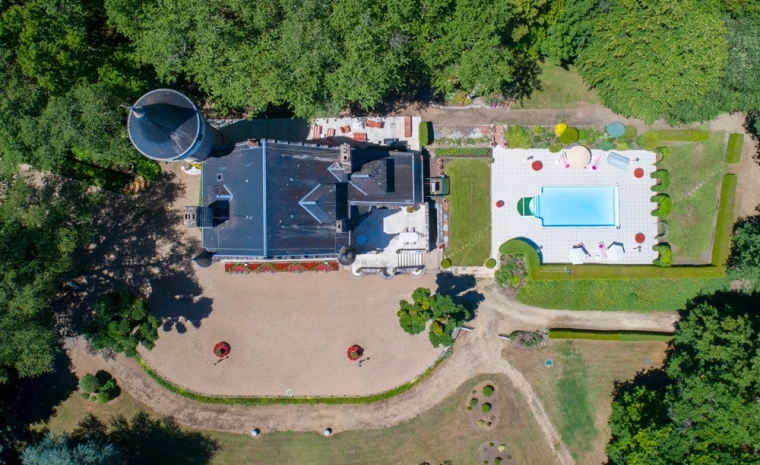 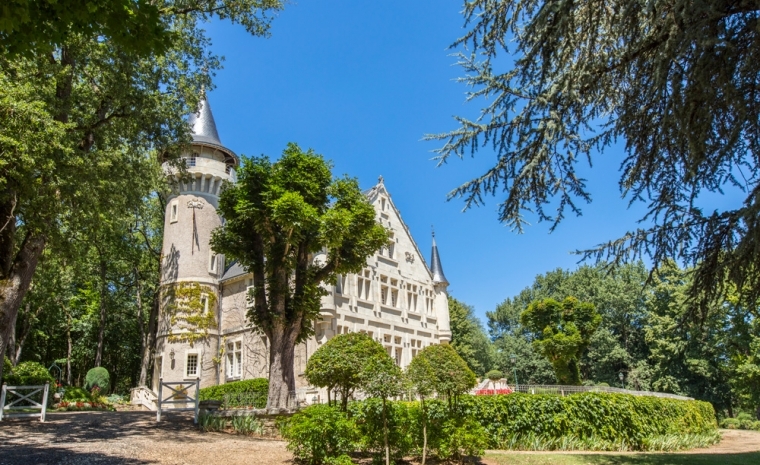 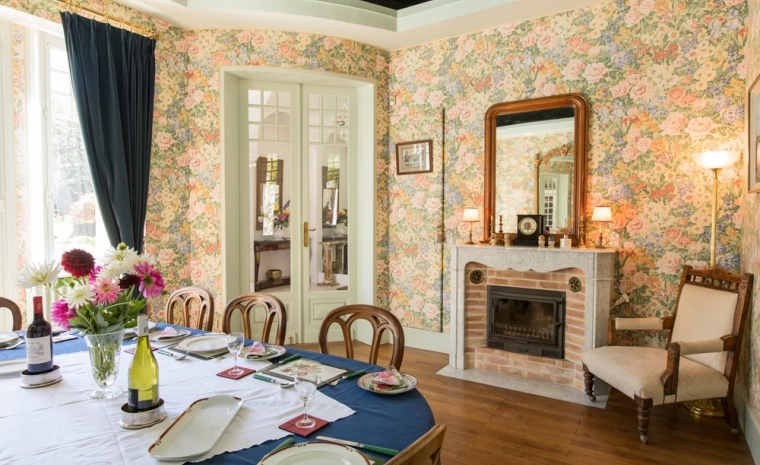 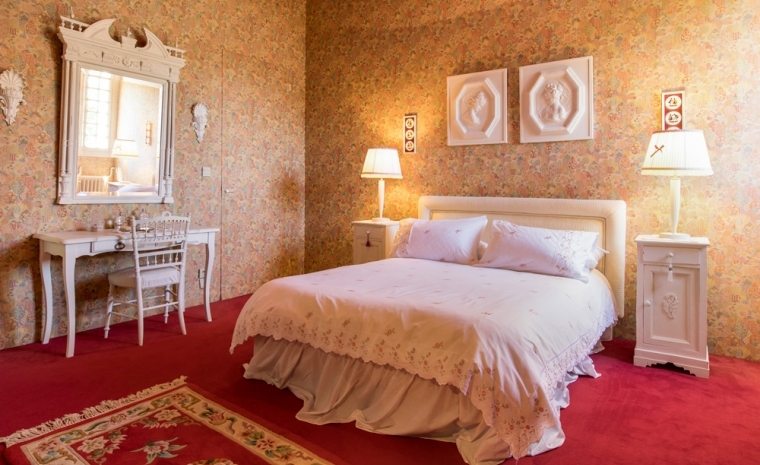 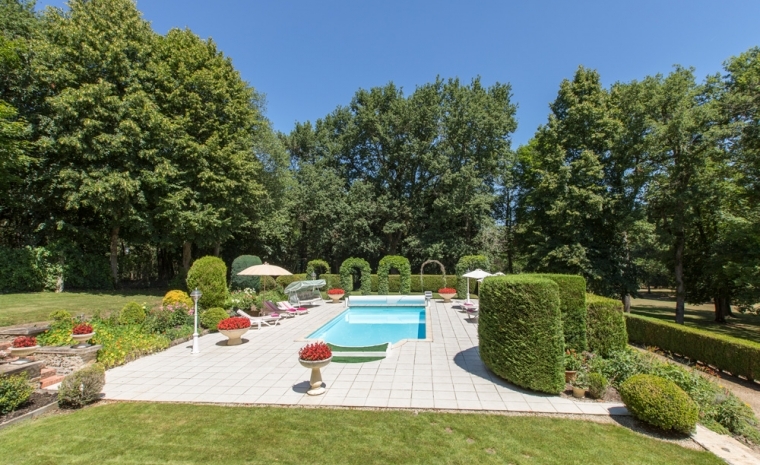 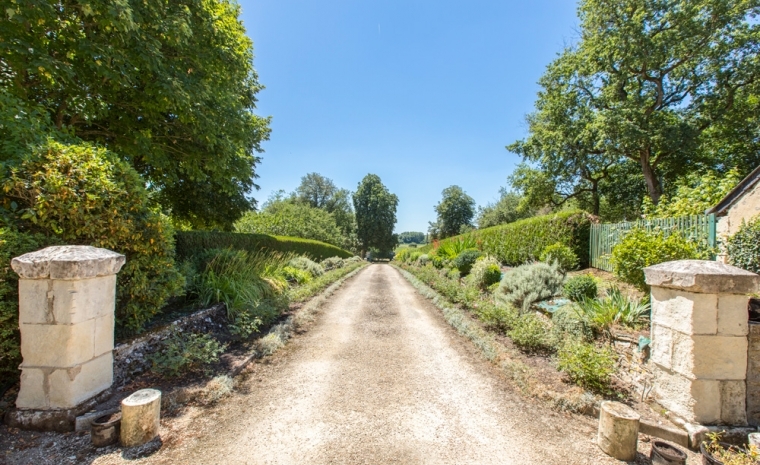 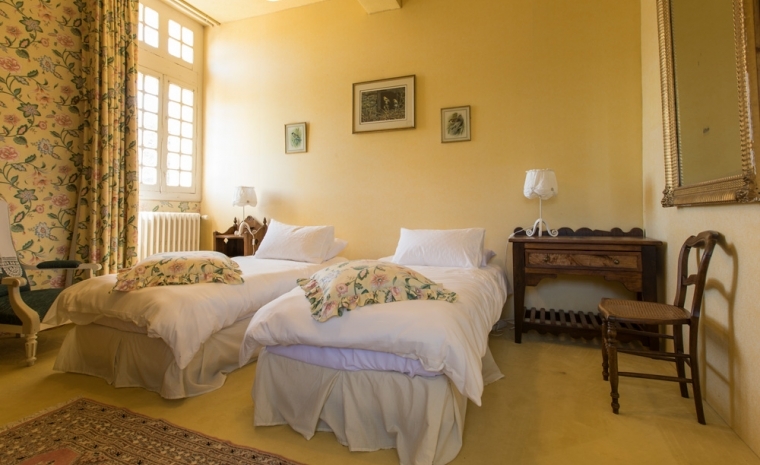 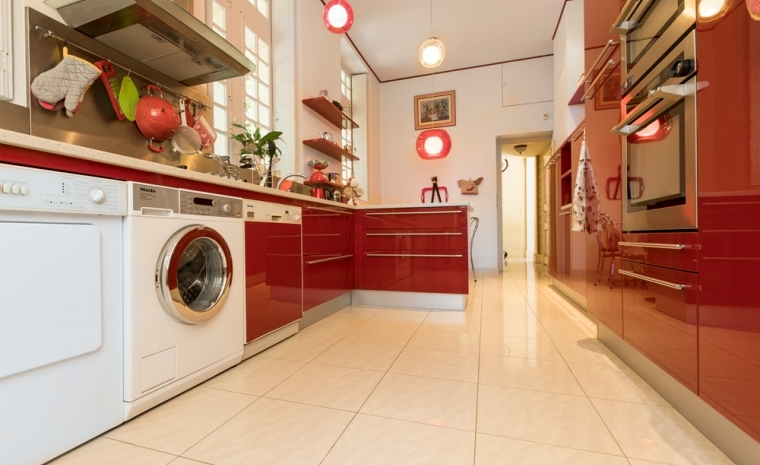 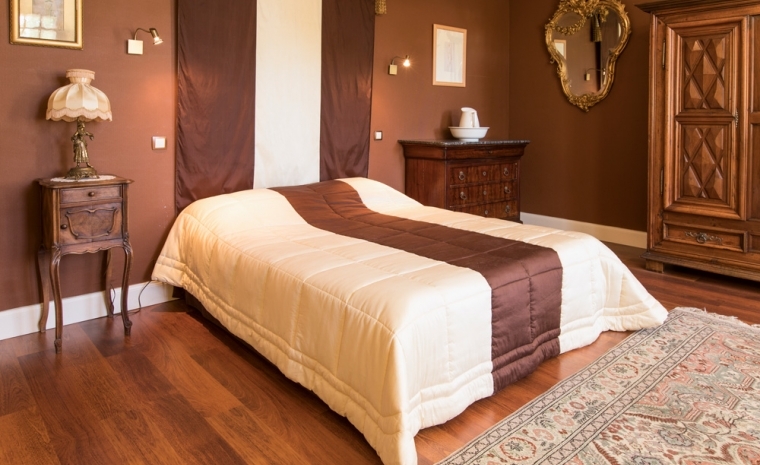 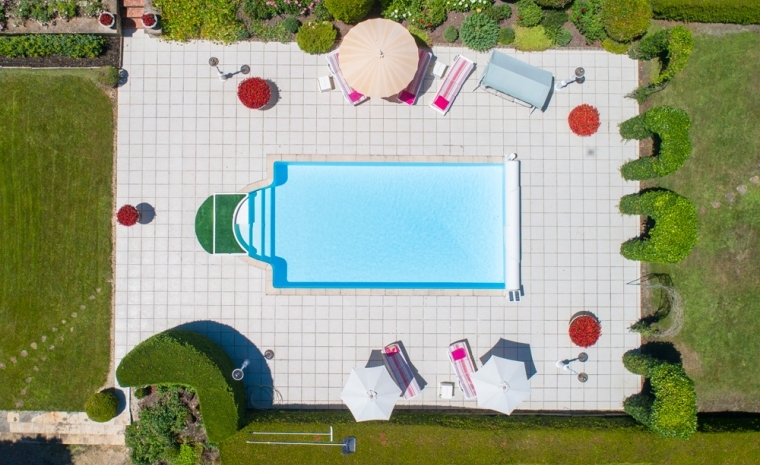 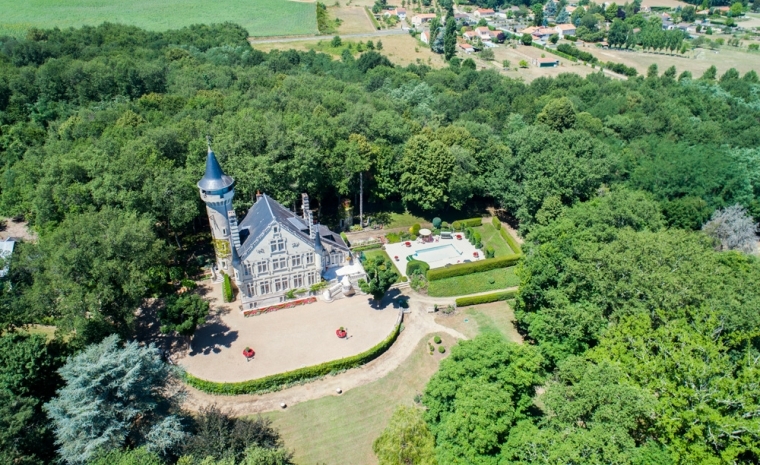 Bright, sophisticated, and elegant, this chateau in Charente blends old-world charm with modern day comforts to provide a welcoming and luxurious holiday retreat in a serene setting. Vibrant décor and warm hardwoods energize the spacious and well-appointed interior spaces. Unwind in the comfort of the open plan living room beside the fireplace, or in the lounge by the bar. The colourful kitchen is fully equipped, and the formal dining room or terrace will gladly host family mealtime. Five bedrooms span across two floors, each beautifully designed and with en suite baths. Two of the bedrooms include anterooms with additional beds, making them ideal for those travelling with kids. A stroll around the expansive grounds will set anyone at ease. Set in the middle of a 7.5-acre park, guests will enjoy private access to beautiful lake with wooden bridges, ancient trees and wildflower meadows, and a heated pool. There are a wealth of activities and must-see destinations within an hour of the chateau: From authentic Italian restaurants within walking distance and wine tasting in the Loire Valley, to the numerous medieval towns and local markets in the Vienne. Advertised rates are for a maximum of 10 adults plus 3 children.
Short break prices may differ depending on capacity. Please enquire.

The chateau has five bedrooms on two floors, each with a private bathroom. Two bedrooms have ante-rooms with additional beds that are perfect for small children. We can accommodate up to 13 guests in total (10 adults + 3 children) Four of the bedrooms have a view of the park, whilst the fifth looks out to the wood behind the chateau.

The extensive grounds provide ample space for exploring, playing hide and seek or simply relaxing under a shady tree. There is a small lake with fishes, adorned with several wooden bridges, provides the perfect spot for painting or an evening stroll. Guest can take advantage of the first floor terrace and access to the dining room along with the private pool and a shady terrace.

20% off advertised rates in September 2018. Discount will be applied at the time of booking. Offer valid from 1st May 2018.

Chateau Paquerette is situated in the north of the Vienne, between Poitiers and the Loire Valley, 3 hours from Paris and 2 hours from the Atlantic Coast.

Places to see & chateaux to visit
An hour’s drive from Chateau Paquerette takes you right to the centre of the Loire Valley, with its many historical sites of interest and, of course, its world-renowned chateaux. Just as beautiful, the towns and villages of the Vienne boast many fascinating medieval buildings and monuments, as well as local food markets. There’s plenty to keep adults and children amused!

The Loire Valley
Château de Villandry – an hour and 20 minutes by car
Villandry, right in the middle of the Loire Valley, is a Renaissance chateau sitting at the centre of three levels of terraced gardens. It was the last of the great Renaissance chateaux to be built on the river Loire. It is distinguished for the harmony of its architecture and, in particular, its wonderful all-seasons gardens.

Château d’Azay le Rideau – an hour and 10 minutes by car
Azay-le-Rideau has to be one of the prettiest of the Loire chateaux! Built on an island in the middle of the Indre river by a rich banker during the reign of François the first, it reflects the latest building techniques and innovation of the time. With its feet in the waters of the Indre, its reflected facades gives it an other-worldly quality that makes it unique amongst the Loire chateau.

Château de Chenonceau – an hour and 20 minutes by car
A property of the Crown, then a royal residence, Château de Chenonceau is renowned not just for its architectural originality but for its inhabitants, namely, Diane de Poitiers and Catherine de Médicis. Today, the chateau is, after Versailles, the most visited in France.

Château Royal d’Amboise – an hour and 25 minutes by car
King Charles VIII and François 1st (between the end of the 15th and beginning of the 16th centuries) transformed the medieval fortress of Amboise into a magnificent royal residence. It became a kind of cultural mecca, with many of the most noted European writers and artists of the day being invited to the Court of Amboise. One of them, Leonardo de Vinci, spent the last part of his life here in exile from Italy and is buried in the Chateau’s chapel.

Chinon – an hour by car
Chinon is a picturesque town with a medieval heart. You can spend time walking round and admiring the old town and its quaint streets, its squares, gardens and quayside, which straddle the length of the Vienne river. Its medieval quarter and the fortress that dominates the hill above the town are not to be missed.

Saumur – an hour and 15 minutes by car
Saumur is France’s equestrian capital and the Cadre Noir, France’s national horse-riding school. It is one of the many places that you might want to visit here. The town’s first buildings were constructed during the 11th century and it is home to two chateaux: Château de Saumur, a fortressed castle that was built during the 14th century for the Dukes of Anjou and has played the role of manor house, Governor’s residence, prison and arms depot and the elegant Château de Beaulieu, built in the 18th Century and designed by architect Jean Drapeau. The town lies at a natural crossing point between the rivers Loire and Thouet and is surrounded by vineyards.

Tours – an hour and 10 minutes by car
The capital of the Indre and Loire departments, Tours has a reputation for being discreet and is therefore a town where people live, as opposed to being a top tourist destination. That being said, Tours has some very well-preserved historic quarters, a fine arts museum, a magnificent cathedral and basilica, idyllic parks and some great places to shop, including several lively food markets, including the central marketplace (les halles).

Richelieu – 35 minutes by car
Designed by architect Jacques Lemercier, the chateau and the town of Richelieu were the vision of just one man, Cardinal Richelieu. Almost 2000 workers worked on its construction, which was started in 1631 and almost finished by 1642. However, come the revolution, Richelieu’s chateau was bound to be on the target list and its stone was ‘borrowed’ to build many of the buildings surrounding Richelieu’s historic centre. Happily, its vast park, the dome, its cellars, the orangery and monumental gate survived and make a delightful spot for a walk or picnic.

Medieval towns in the Vienne
Poitiers – 40 minutes by car
A city packed with history and culture and capital of the historic region of Poitou, Poitiers’ town centre boasts some remarkable medieval buildings, pretty squares and parks – including the glorious Parc de Blossac - as well as some magnificent churches and cathedrals. Notable among them is Notre-Dame-la-Grande, a Roman Catholic edifice that was built between the 11th and 12th centuries. Its famous ornamental facade in which the main episodes from the Bible are carved is a must-see. Poitiers is also a University town and its 20,000 plus students give it a lively, youthful energy.

Chatellerault – 30 minutes by car
Built on the banks of the Vienne river, Châtellerault’s origins date from the Middle-Ages. From that period until the Renaissance, its industry consisted predominantly of cutlery, sword making, tanning and watchmaking. In 1816, the commune became a centre for arms manufacture for the French government, a link which is preserved today in the form of the French military’s archives on armament matters, which are all located in the old weapon manufacturing facility. But Châtellerault charms are not all about arms! As you would expect from a town with a rich industrial past, the town has its fair share of architectural splendours and museums – including the Museum of Cars,

Cernay on the map