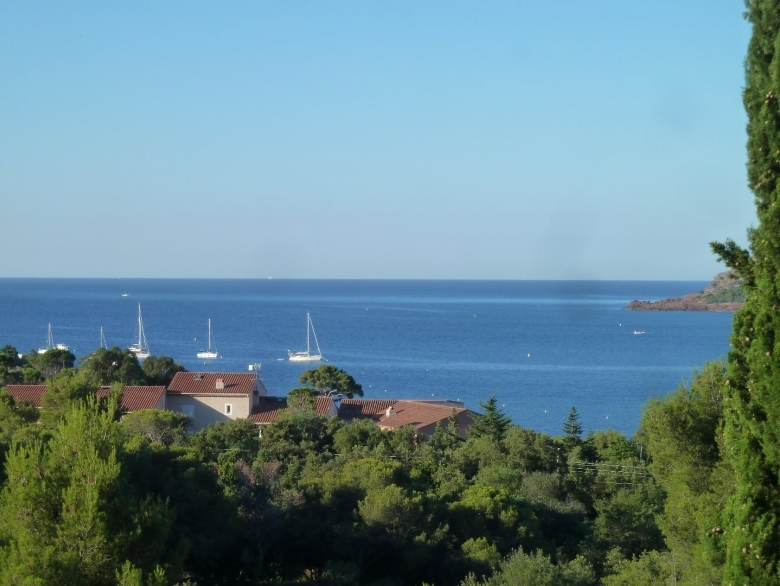 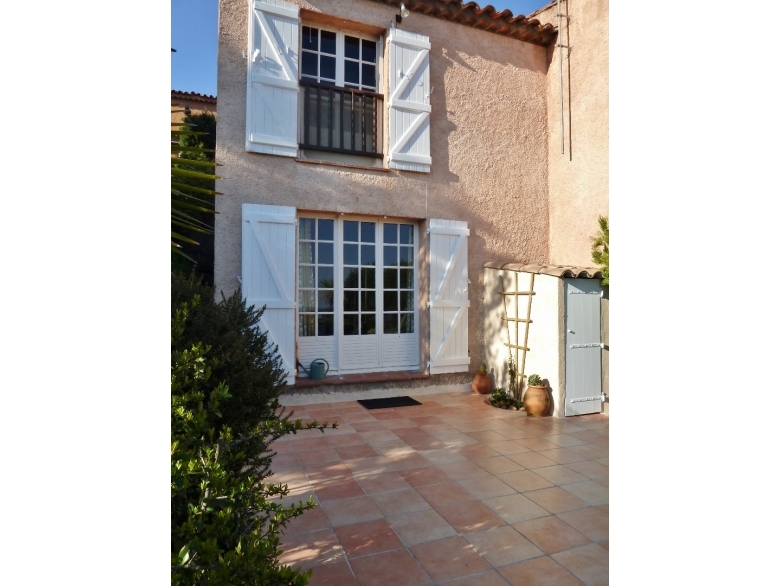 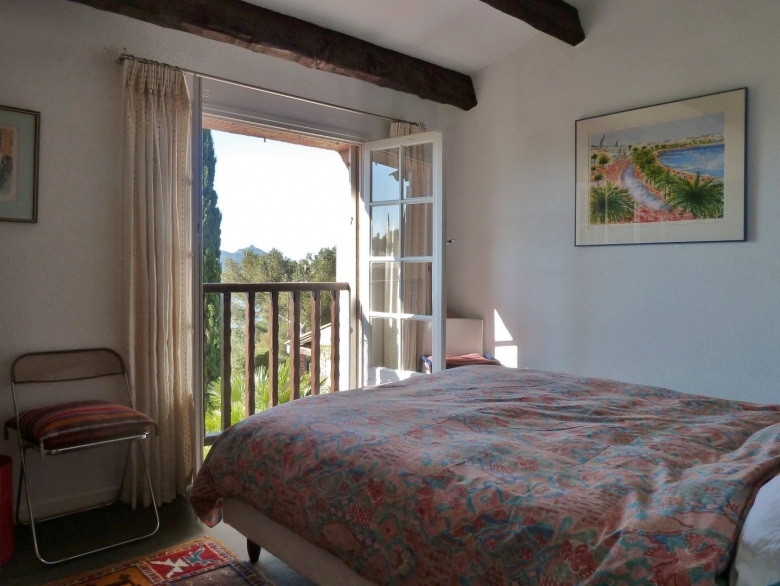 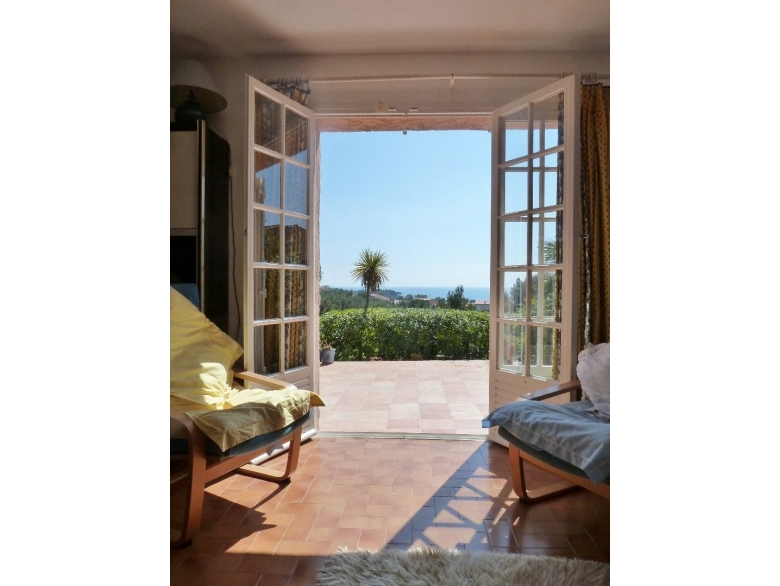 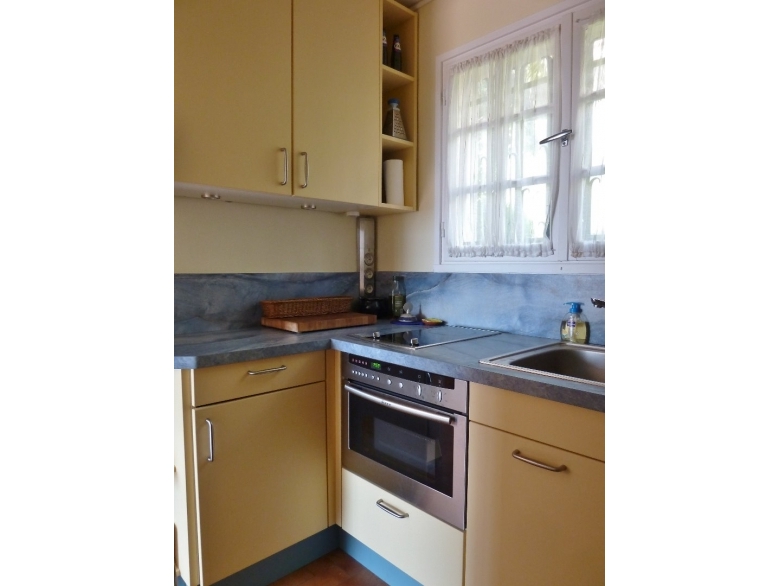 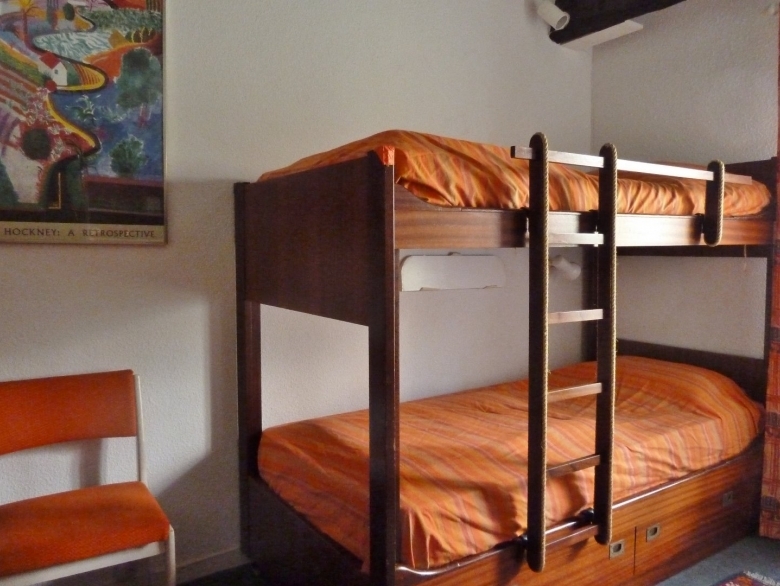 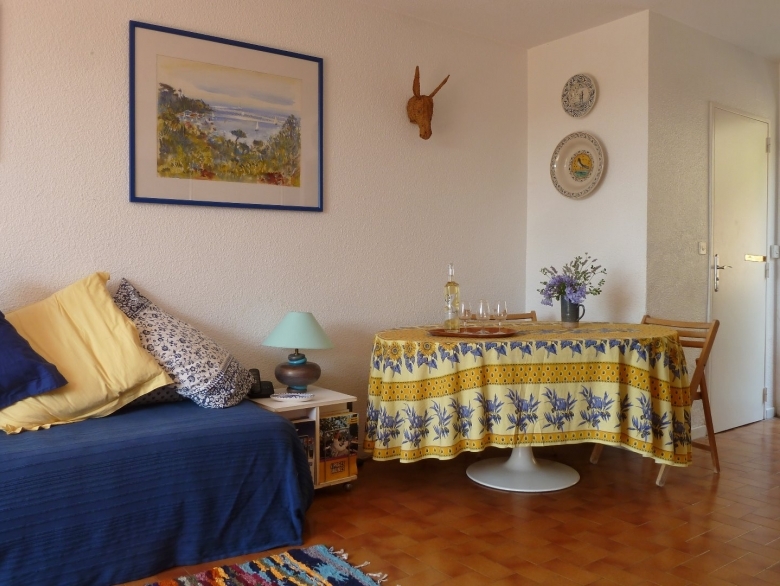 The house is situated in a superb position about 200m from the Mediterannean sea, with the dramatic and colourful Esterel mountains behind. In five minutes on foot (or two minutes by car) you can reach the sandy beach and the shops and restaurants of the village of Agay. In summer months, there are opportunities for various watersports, and on Wednesday mornings year-round the local open air market is in full swing. St Raphael is about 20 minutes drive and has many restaurants and shops, covered market, marina and crazy golf, boat trips along the coast and to St Tropez. The ancient town of Frejus, with Roman ruins and its mediaeval cathedral, is a further 10 minutes beyond St Raphael.

The house is at one end of a terraced group of four, within a hillside estate of 28 houses with lower and upper parking areas. We park in the lower parking area.

The path from the carpark to the house includes a staircase of about 25 steps up. The footpath from the beach is about 150 m, most of which is up hill.

Private south-facing patio terrace of about 40 sq m, with garden in front and to one side.

Agay is a bustling seaside village on the coast road from St Raphael to Cannes, and a thriving summer holiday destination for families. Outside school holidays it is calmer, but makes for an equally attractive holiday for adults. The warm weather usually lasts from April, when there are plenty of spring flowers, until October – it’s even made beautiful by the mimosas in February.

It nestles between a well-sheltered bay with a wide sandy beach and the beautiful and dramatic red rocks of the Esterel Massif. The coast road to Cannes, the Corniche de l’Esterel, is delightful, with the red rocks covered with pine scrub plunging steeply into the Mediterranean.

Activities for families abound, with a range of nearby beaches, sandy or pebbly to suit your taste. The beach at Agay, just 200m from the house, provides canoeing, surfing and other water based activities. The rocky coastline between the beaches offers many opportunities for snorkelling – bright orange starfish and octopus can be seen among the fish of many kinds.

St Raphaël is the nearly town, 20 minutes away, with great seaside promenade, marina and crazy golf, markets and restaurants aplenty in the old town and by the waterfront. Its twin Fréjus, 10 minutes further on, is a Roman town with ancient ruins and an important mediaeval cathedral. You can get a boat from St Raphaël to St Tropez, by far the best way to get to that popular resort in the summer.

For walkers, the Esterel is a wilderness of great beauty, with many fine walks, sea views and rocky ascents. Access in summer is only on foot or bicycle, so it is very peaceful. Out of the high season some roads are open and the many of the bushes of the maquis are in flower. Further afield there are gorges on the way to the Maritime Alps, most notably the Gorges du Verdon – about 2 hours from the coast.

Art lovers will find in the region numerous galleries of the impressionists and later artists, for example the Musée de l’Anionciade in St Tropez, and Fernand Leger in Biot. You can visit the house of some of the great artists who made the south of France their home, such as Renoir’s in Cagnes and Matisse’s in Nice.

Back in Agay there are plenty of shops for your local grocery needs, bank, post office and tourist information, and a market on Wednesday mornings. The nearest mega supermarket is Leclerc in Boulouris, about 10 minutes’ drive away. The Agay waterfront has lots of bars and restaurants, including two or three directly on the beach. At the east end of the village is a small “centre commercial” comprising a supermarket, laundry, fishmonger, and some restaurants, and a boulangerie & breakfast café.

The Esterel is a wilderness of great beauty, with many fine walks, rocky ascents and views from the dramatic red rocks to the sea. Anyone wanting to savour the Mediterranean at the same time as getting some exercise will be richly rewarded. Access in summer is only on foot or bicycle, so it is very peaceful. Out of the high season some roads are open and the many of the bushes of the maquis are in flower. Further afield there are gorges on the way to the Maritime Alps, most notably the Gorges du Verdon – about 2 hours from the coast.

The region is bounded by Cannes to the east and the twin towns of St Raphaël and Fréjus to the west; and by the A8 motorway to the north and the Mediterranean to the south. The coast road between St Raphaël and Cannes, the Corniche de l’Esterel, is delightful, with the red rocks covered with pine scrub plunging steeply into the Mediterranean. It passes through several seaside villages, notably Agay, with a well-sheltered bay and its wide sandy beach, followed by Antheor, le Trayas and Théoule. The section between Antheor and le Trayas is almost only remaining unbuilt part of the Cote d’Azur.

Agay on the map

How to get to Hameau du Rastel

New tramlink from the airport takes you to Nice St Augustin, from which you can get a direct train to Agay.  The house is 20 minutes walk from Agay station.

11 hours driving from Calais, or 9 hrs from Paris.

Major railway station at St Raphael (20 minutes away); there is a local train from St Raphael to Cannes via Agay several times a day.

Partial weeks and periods other than Saturday-Saturday are possible outside the high season.