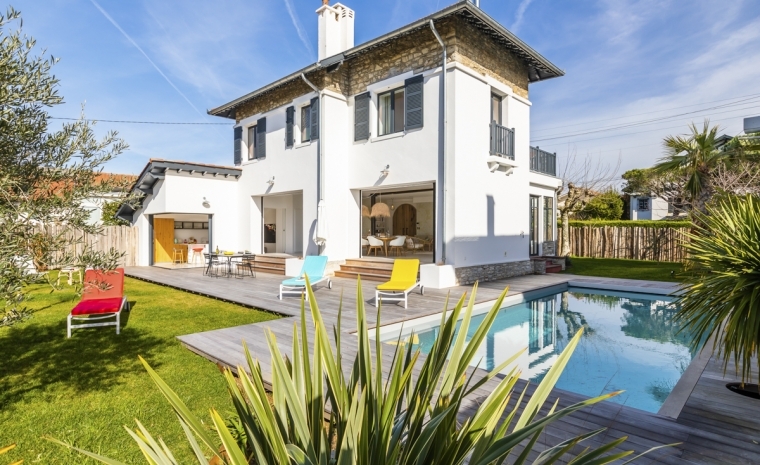 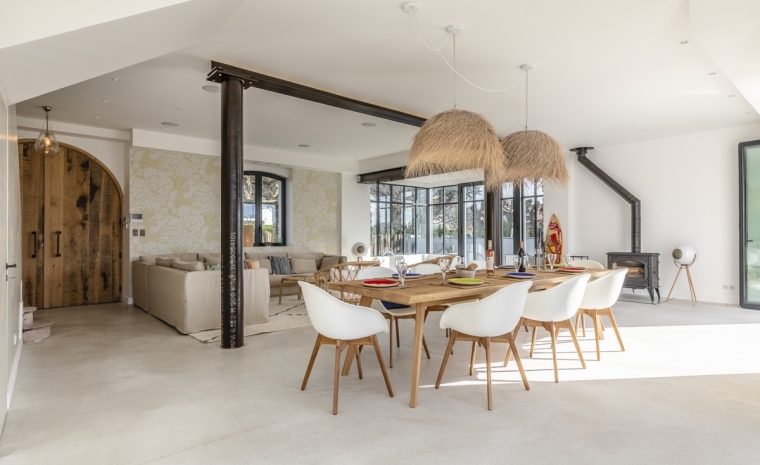 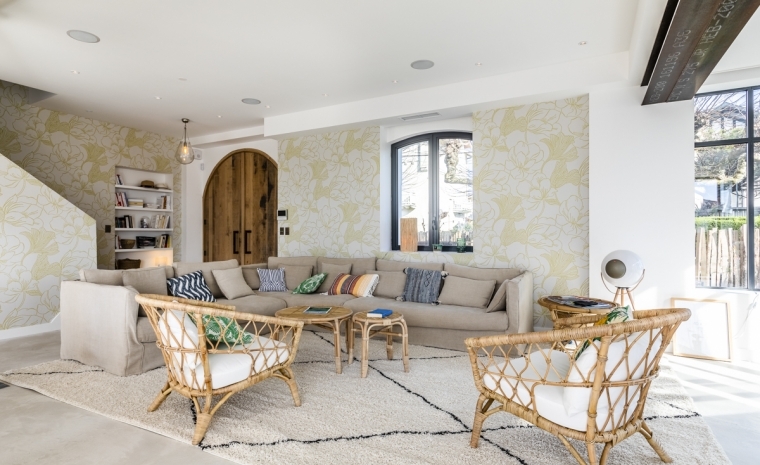 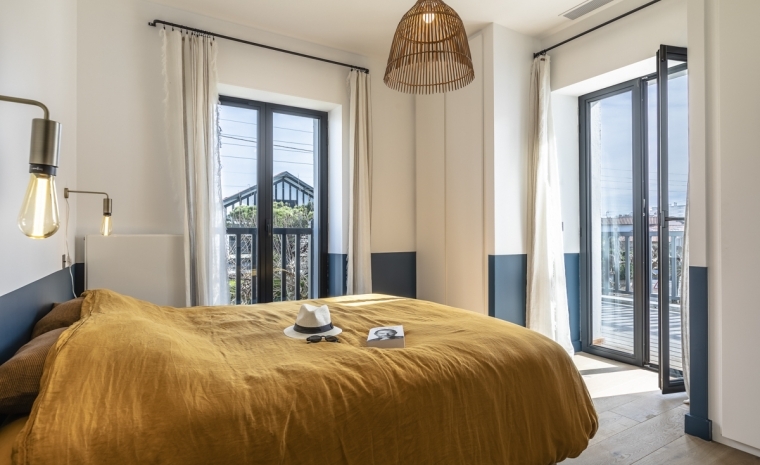 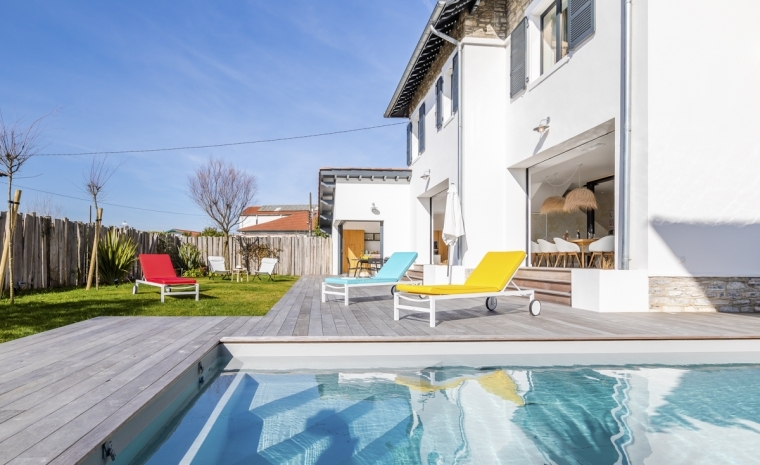 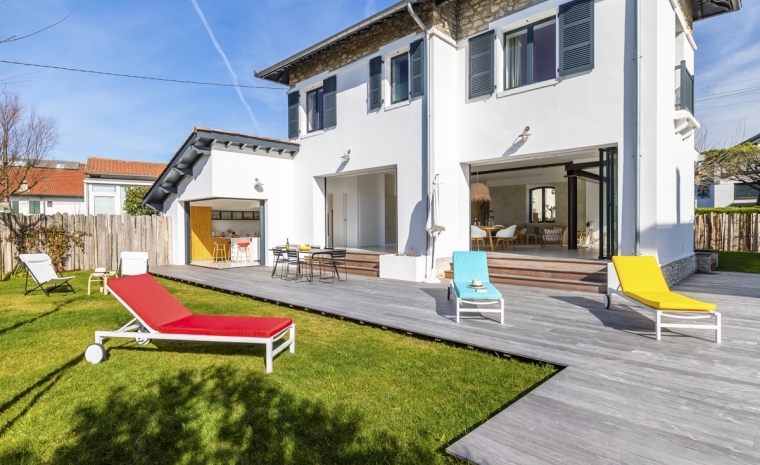 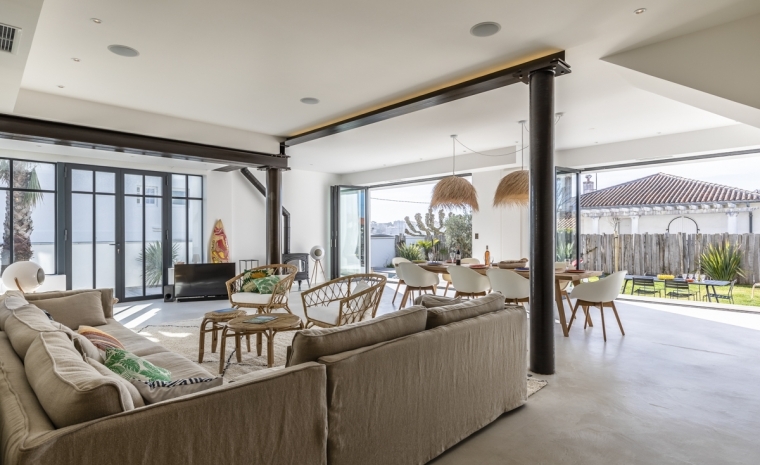 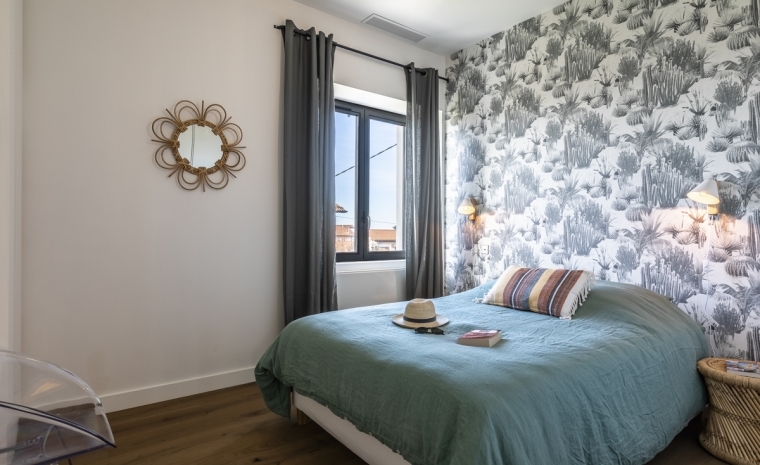 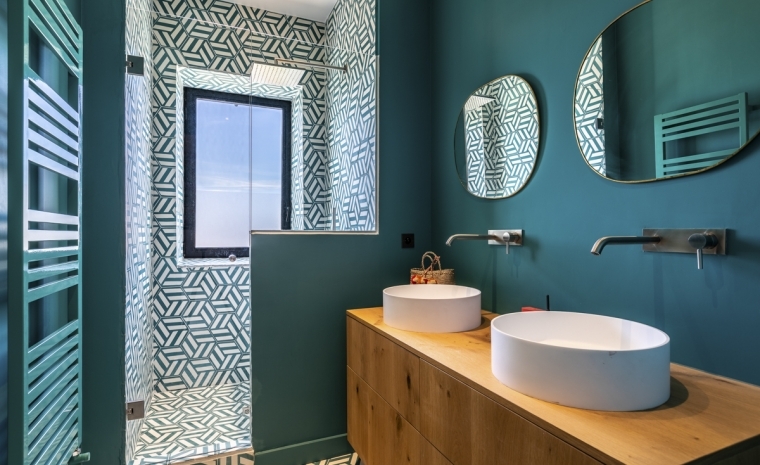 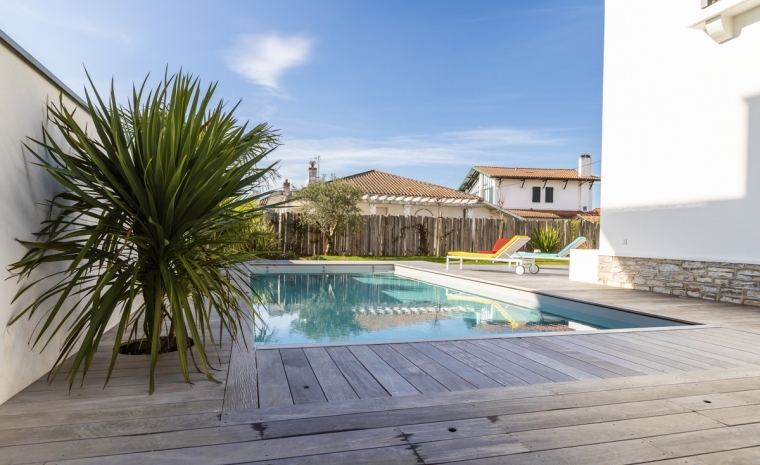 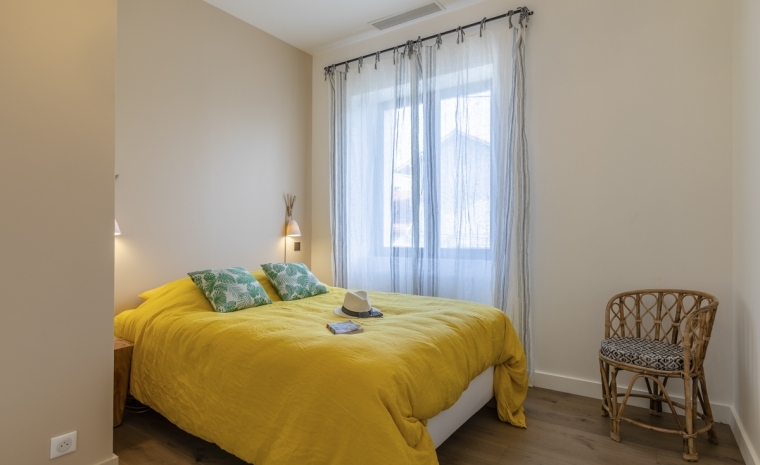 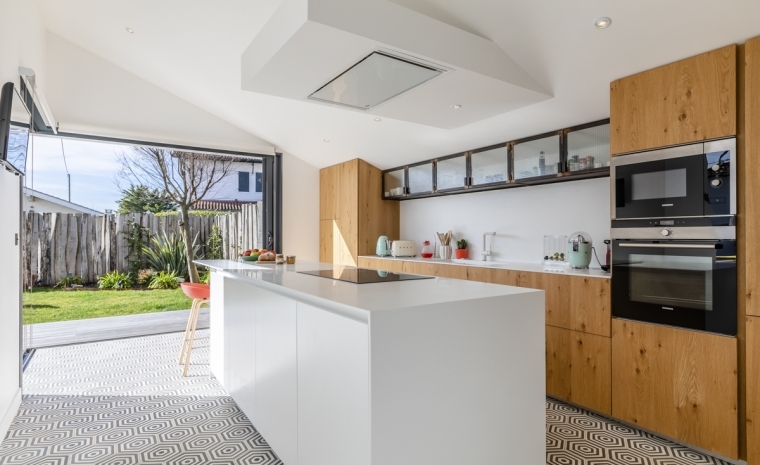 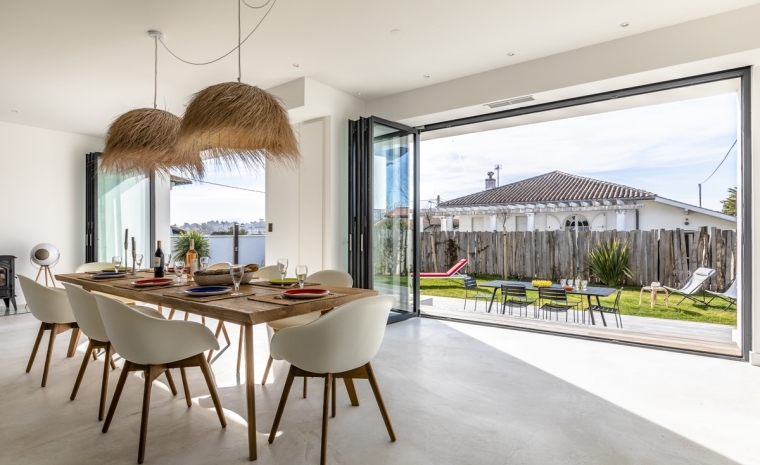 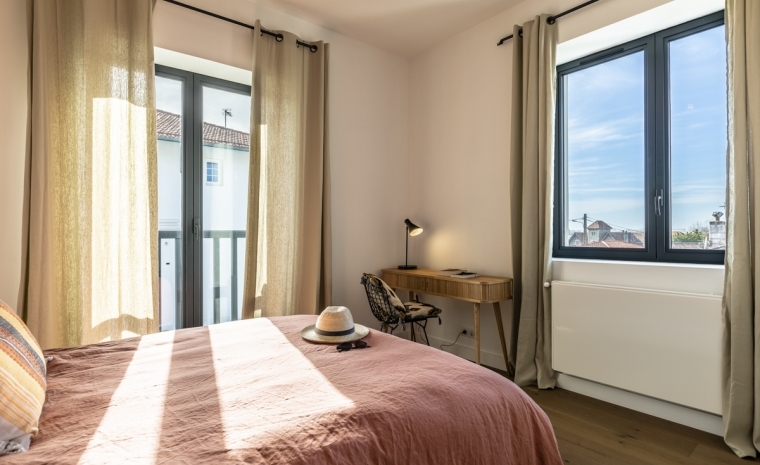 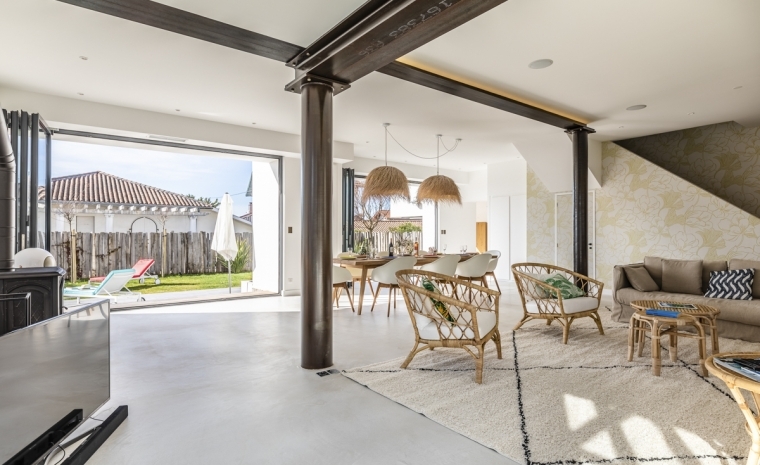 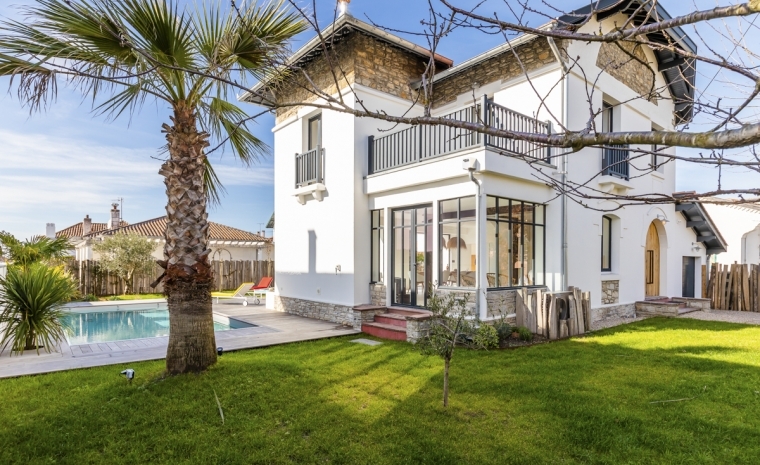 If you are yearning for an elegant white-painted villa with shutters, pool and garden in a residential area near the heart of glitzy Biarritz, this is the place for you. Villa Fantastique is a beautifully renovated 1920’s residence with heated swimming pool, terrace and an area of lawn where you can sit beneath the shade of the palm and eucalyptus trees.

The residence has four bedrooms, one with a balcony, and comfortably sleeps eight. The 1920’s were a period of great glamour in Biarritz and you will easily be able to imagine the stylish house parties that might have been held in this elegant abode. Nowadays, there is 21st century modernity in abudance, with its well equipped kitchen and the wide expanses of glass doors which flood the living area with light that provide a seamless extension of living space to the outdoors once opened.

When you are ready to leave your relaxing new home and explore further afield, you are only 1.4km from the town’s most famous beach, La Grande Plage, where the grand Art Deco Hotel du Palais was built by Eugenie, wife of Napoleon III, in 1855. Continue up to Miramar beach towards the lighthouse at the base of the majestic Cap Saint Martin cliff. You are also near the eleven stunning beaches of Anglet each of which has something different to offer and plenty of opportunity for surfing, walking, golfing and cycling.

There is an amazing market at Les Halles de Biarritz, a couple of kilometres away, where you can buy fresh fruit, seafood, vegetables, warm bread as well as typical Basque specialities. Gastronomers should visit the sea food restaurants in the Port des Pecheurs, the city’s former fishing port.

Biarritz is of course a mecca for surfers and coaching for all ages and abilities or just equipment hire can easily be accessed. You might want to get out and explore some of the further wonders of the Pyrénées-Atlantiques region, whether idyllic Basque villages near the majestic mountains, wilder beaches along the coast or pretty seaside villages.

You may prefer to just stay near your Biarritz villa where you can explore, shop, dine, surf, or just relax by one of the many wonderful beaches this part of the Basque coastline has to offer.

Villa Fantastique is situated in a residential area of Biarritz located east of the famous lighthouse and La Grande Plage and easily accessible to all that the city has to offer.

Beautiful Biarritz is an elegant seaside town on the Bay of Biscay in the Pyrénées-Atlantiques region, south-west of France, near the border with Spain. The resort dates back to the mid-19th century when the aristocracy built their summer residences along this part of the coast, including the well-known Hotel du Palais, built by Eugenie, the wife of Napoleon III. She had spent her childhood holidays on the Basque coast and fallen in love with its landscape - the hotel remains a symbol of the luxurious lure of Biarritz.

The town’s most famous beach, La Grande Plage, (1.4km) is in the heart of Biarritz. Walk along it to view some of the amazing Art Deco buildings which can be found around the city - the Casino (also home to a theatre and swimming pool) and the Aquarium which is a must for sea-lovers or families. There are plenty of other beaches such as the wilder Plage de la Cote des Basques, (3.1km) which has become a favourite for surfers. Biarritz has become a surfing mecca with enthusiasts from all over the world attracted to its 6km of coastline and there are plenty of surfing schools for all abilities and ages.

Phare de Biarritz (1.3km) is a tall lighthouse built in 1834 - climb its 248 steps for stunning ocean and town views or look towards the beaches of the Anglet coastline. These northern beaches, surrounded by grassland and forests with promenades for walkers and cyclists, are well worth a visit. Known as “Little California” they extend over 4.5km of fine sand from la Barre at the Adour Estuary (5.3km) to Chambre d’Amour (1.3km), situated at the base of the majestic Cap Saint Martin cliff with its famous lighthouse. Sables d’Or (2km), lined with bars, restaurants and shops, hosts events throughout the summer with volleyball on the beach and spotlights to admire the waves at nightfall. L’Ocean (4.1km) is less accessible but will satisfy your craving for wilderness. If you would like to watch how the professional surfers compete, head to Les Cavaliers (4.2km).

Biarritz is a paradise for golfers as well as surfers. Your residence is only a 5-minute walk away from Golf de Biarritz le Phare. When you need change of scenery for your swing and putt, NAS Golf Chiberta (4km) surrounds L’Ocean beach and provides spectacular vistas of the ocean.

You will find some wonderful sea food restaurants in the Port des Pecheurs, (2.2km) the former fishing port. Food lovers, don’t miss the amazing market at the Halles de Biarritz (2.3km) including many wonderful Basque specialities.  Some of the local specialities include the local touron (marzipan), locally cured ham as well as mussels and mushrooms.

For a change of scene, head to Bayonne (6.5km) where you can walk around the narrow streets admiring the beautiful and historic architecture or walk along the river front. There are also some idyllic Basque villages inland to explore such as two of France’s Plus Beaux Villages, Ainhoa (26km) and Sare (25km).

Indeed, this whole region offers an extended range of outdoor activities, such as walking, horse-back riding, fishing, cycling, canoeing and many others including water-sports along the coast.

Anglet on the map