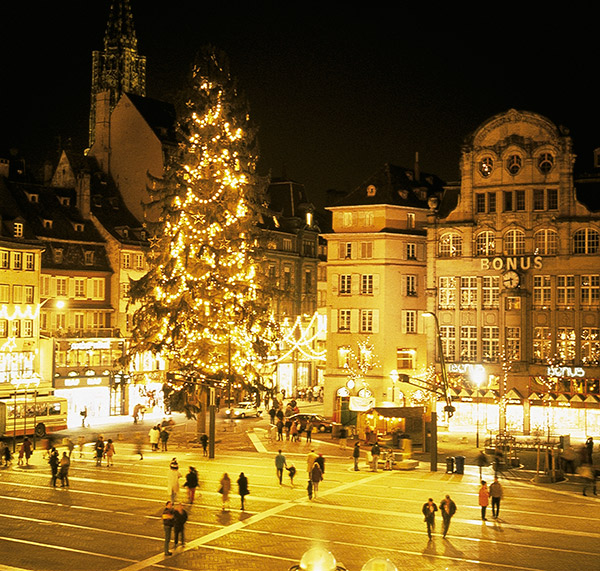 The Alsace region is home to 35 Christmas markets from Colmar to Mulhouse via Strasbourg. You can choose from "bredele" markets (Christmas biscuits), local produce markets, markets specialising in Christmas decorations or local handicraft.

Strasbourg holds the oldest (held since 1570) and now one of the largest Christmas markets in France called Christkindelsmärik. The setting in front of Strasbourg Cathedral is breathtaking. While you are this close to Germany, cross over the river and visit the Christmas markets there, too.

Strasbourg has flavors of both France and Germany, and sits right on the border of the two countries.

Its picturesque "la Petite France" neighbourhood looks like something straight out of a fairy tale book, a riverfront neighbourhood with black and white timber-framed buildings. The Black Forest and the legendary Rhine River are just beyond the city's edge.

Strasbourg is an important centre of manufacturing and engineering, as well as of road, rail, and river communications. The port of Strasbourg is the second largest on the Rhine after Duisburg, Germany. The city is the seat of the Central Commission for Navigation on the Rhine.

The city is chiefly known for its sandstone Gothic Cathedral with its famous astronomical clock. Strasbourg Cathedral is one of Europe's most beautiful example of gothic architecture.

The major shopping streets lie on the central island. There is a food market on Bd de la Marne (Tues & Sat) and a flea market on Rue du Vieux-Hopital (Wed & Sat).

Across town, a host of interesting bars and restaurants surround the cathedral and its the perfect place to relax and to people watch.

Accommodation in central Strasbourg gets booked fast during the Christmas market period, so search for a hotel in Strasbourg now. Alternatively you may want to try charming rural self catering accommodation near Strasbourg, as during the winter months many holiday property owners allow short stays.

Transport quick facts about the markets:

As a foot passenger from the UK to Strasbourg:

By Train: Train services operate eastward to Offenburg and Karlsruhe in Germany, westward to Metz and Paris, and southward to Basel. Since June 10, 2007, Strasbourg has been linked to the European high-speed train network by the TGV Est (Paris-Strasbourg). The TGV Rhin-Rhône (Strasbourg-Lyon) is currently under construction and due to open in 2012. Book Eurostar and TGV tickets.

Taking your car from the UK to Strasbourg:

By Train: take your car on Eurotunnel from Folkestone, Kent direct to Calais in France. Journey time is about 35 minutes and the cost varies but is around £55 day trip return for a car and 5 passengers.

By Boat: It is usually cheaper to take a car over to France by boat, because the journey takes longer. Operators such as Seafrance and P&O offer regular ferry trips across the channel, with prices ranging from around £30 for a return day trip. Book a ferry to France.

The drive from Calais to Strasbourg is approximately 619km, 5 1/2 hours.