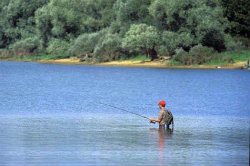 Coarse fishing is very popular in France where the lakes and rivers hold a huge variety of freshwater fish such as Bream, Tench, Roach, Pike, Carp and Catfish. If you take a fishing holiday at a French Connections property with its own private carp lake, you may not need a licence, so do check with the owner.

Rivers like the Saône, Seine, Lot and Marine offer great fishing for all types and sizes. Whether you want to feeder fish for Bream, stalk Chubb or wait for that screaming take from a hard wild Carp, you'll find something for every angler, from novice to expert.

Some lakes are privately owned but many lakes and rivers can be fished on a day ticket basis. Fishing permits for public waters can be obtained from local newsagents (tabac) or bars and a fishing licence covers local areas and cost around 7 Euros per day - 30 Euros for 2 weeks (excludes Trout and Salmon).

Carp fishing is by far the most popular, with anglers coming from all over Europe to feed their addiction. It's easy to see why; 30-40lb Carp are very common and France boasts the world record Carp, at a staggering 89lb, which was caught in 2007 at a lake in Dijon.

Due to the richness and size of the lakes, combined with the climate, Carp grow big - really big - and this also goes for the large Welsh Catfish, a very hard fighting fish that reaches over two metres long and can be found in many lakes and rivers across the country. These have been caught in excess of 150lb, real arm-aching stuff! Carp and Catfish are found all over France, the most popular areas being Reims, Brittany, Troyes, Dijon and Bordeaux.

Sea fishing off the Atlantic coast is excellent and you do not need a licence. Check out our holiday gites, farmhouses and charming bed & breakfasts in this region.

The sea fishing in France is very similar to fishing in Britain, with climate dictating the type of fish to be found. Warmer months bring Bass and Mackerel, which can be caught from beaches using light line with feathers and lures, and Conger and Skate around the La Rochelle area. Further down the coast in the Landes department of Aquitaine you can try out your sea legs with a bit of boat fishing, in the hope of bagging a Tuna or Sea Bream for supper.

Fly fishing is extremely popular with the French. With such diverse types of water from lakes to fast flowing rivers and reservoirs to crystal clear chalk streams, it's little surprise that the French have won the World Fly Fishing Championships on numerous occasions.

Public salmon and trout fishing is available in canals and navigable rivers and these also contain other fish such as pike. You will need a salmon stamp in addition to your licence. You will find that the fishing rights to some of the best trout or salmon streams, rivers and lakes are owned by individuals or groups.  This means that as well as buying a fishing licence, you must pay the owners for a permit to fish.  Information can usually be found at the local tourist office. The Trout season usually starts at the beginning of May and runs through to October, although owners can adjust dates as they wish.

As with coarse fishing, you need a licence to fish public - and most private - waters in France. The local French Tourist Office can tell you where to purchase a licence and also provide maps and information on where you can fish. Rivers and streams are generally categorized as either type 1 or 2.  Category 1 waters are generally trout and salmon waters while category 2 waters contain more rough fish.

Some of the best salmon fishing in France can be found in the Pyrénées Atlantiques on the Gave d'Oloron River some 60-80km east of Biarritz. The towns of Oloron-Sainte-Marie, Sauveterre-de-béarn and Navarrenx are good places to start. Tributary rivers including the Gave d'Aspe and Gave de Pau are also good for salmon. Here, look out for the towns of Lurbe-Saint-Christau, Peyrehorade, and Pau. Salmon also run up the rivers Gaves d'Ossau and de Nive. The season is from June until August because of the melting snow in earlier months.

In the Brittany region, the Elle River is very popular. The "Loge Coucou" is one of the more famous stretches of the Elle River (between the towns of La Logue Coucou and Le Quinquis just north of Lorient). It's mostly private and the season runs from 15 June to 14 July. Ideal fishing with a 3-4# line using the finest size 12-14 dry fly.

The Loire River and its tributaries are a major salmon fishery for France - over 800 kilometres in length. The Loire River is the longest river in France and is said to be the last wild river in Western Europe. Originating in the north-eastern part of the southern Cévennes highlands, it flows roughly northward through Roanne and Nevers to Orléans and thereafter westward through Tours to the Atlantic at Nantes. Its main tributaries include the Nièvre, Maine, and Erdre on the right bank, and the Allier, Cher, Indre, Vienne, and Sèvre Nantaise on the left bank.

Jura, just north of Lyon is home to a large trout known as the Zebra Trout , a gorgeous stripey trout that's hard to find but grows to a impressive size. The record stands at 103cm and these fish can be found in the River Bienne and Aine.

If you fancy something different, then Black Bass can be caught in southwest France. The Lot River near Cahors is excellent, along with the rivers Gironde, Dordogne, and Landes. In southern parts of France, the Garonne near Toulouse, the canal between Aramon and Vallabreques, the Tarn River and the Lot River all have a significant number of Bass.

In the southeast, the Rhône River is known as the premier Bass fishery in the region.  In In Burgundy, the Saône and the Seille Rivers have the same reputation.