Christopher Campbell-Howes gets ahead with a new hat . . . 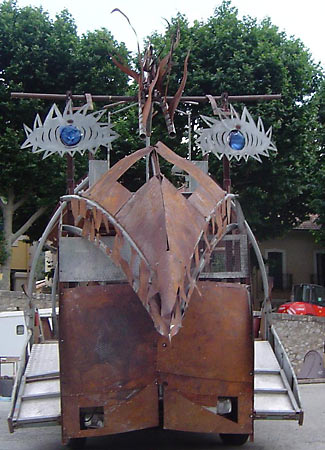 IT'S NEARLY 20 years since I came to live in France, creeping into Le Havre one dark October morning waving a sheaf of official papers and passes which everyone said you absolutely had to have or they'd just put you straight back on the next ferry to Portsmouth or wherever. In the event nobody took the blindest notice of any of it. Very strange. Unreal, too. Weren't they interested in a family of Brits (plus dog and cat) who'd suddenly taken an immense swerve in the even course of their lives to date, had given up paid employment, sold up and were in the process of moving lock stock and barrel to the south of France? Did nobody share our sense of adventure, did no one recognise the butterflies in our stomachs? Did we not deserve a little encouragement, a word of welcome?

The big bird made from scrap metal

Clearly the answer was non, on all counts. Maybe we expected too much, but we were surprised at the complete lack of interest, even in Bellamy the dog's inoculation certificate.

Something else that surprised us very much was to discover, after three or four months of self-doubt and uneasy settling in, that we weren't alone. Other greenhorn expats lurked in the area. In fact there turned out to be quite a stratum of Brits. Our exodus had coincided with many others, people more or less of our generation. We discovered that some of these could only thrive on Brit company and couldn't wait to jump on the roundabout of Brit dinner parties and Brit bridge clubs. Others refused to socialise on the grounds that they hadn't come to France to meet a load of compatriots, being a Brit didn't automatically guarantee friendship, etc. etc. Some had arrived a year or two before us, and lolled about on god-like clouds of social superiority. And some were very lovely.

Despite all kinds of upheavals in our lives Josephine and I kept - and keep - up with several Brits from the very early days, but we are just starting to notice the signs of a homegoing, back-to-Blighty mentality. Nothing very much: houses of supposedly hardened expats appearing on the market, due to bereavements, or long-term illness, or very elderly parents to look after, or an unwillingness to face the prospect of French retirement homes and geriatric wards. I can't say this is something I relish.

And one or two say they find it very difficult living so far away from the grandchildren. Just at the moment I've no opinion on this to offer, because we had ours here to stay last week. (To be exact, they're Josephine's step-grandchildren.) They're very little, 10 months and two-and-a-half. Their mother often looks for signs of a prominent family music gene that appears to skip generations. William (10 months) seems to have it. At home he goes to something called Monkey Music, where he's completely absorbed thumping various percussion instruments.

THE VILLAGE has been in complete chaos recently. Although there's a by-pass the other side of the river, there's only one road through the village, plus the old railway line which sometimes does duty as a relief road. A few days ago the large open area which was once the station yard was given over to Les Ferrailleurs, The Ironworkers. This is a group of sculptors in old iron who get together to present a summer exhibition of their work in various villages, accompanying their exhibition with three nights'-worth of dancing, drinking and general merrymaking to the strains of their chosen music style (you've guessed, of course), heavy metal. This year it was the turn of our village, Olargues.

So Les Ferrailleurs took over the railway yard with their pitches and stages, not forgetting to spread all over the relief road that passes through the middle of it. Some mighty genius of municipal planning also earmarked this weekend for the closure of the road through the village, to leave it vehicle-free for scraping and scouring pending a much-needed resurfacing. So the village was practically in quarantine, like one of those closed villages during the Black Death you read about, where none might come and none might leave. It wasn't too bad for us, living within easy walking distance of the village, but the air round village car-owners was blue with French oaths, imprecations and manic temple-tappings at such imbecility.

ON THE Friday night of Les Ferrailleurs' weekend William took a long time to go to sleep, and, as is the way with 10-month-olds, just when you thought he'd finally settled he started up again. We put our light out at about 10.45, conscious that the wailing downstairs hadn't stopped and that very soon his Mum or Dad would have to go and see to him. I was just dropping off when suddenly through the open window came this mighty noise, a vasty (thank you, Shakespeare), giant, behemoth roaring and clanging, as of a thousand girders struck by Goliaths with drop-forged sledgehammers, of immense cymbals of ships' plates clashed together by Cyclopean hands (yes, I'm enjoying writing this, thank you), as of drum-skins stretched across volcano craters, as of . . .oh, you make it up: you've got the general idea that it was very loud indeed. And getting louder: whatever the source, it was coming nearer, advancing relentlessly along the old railway line from Les Ferraileurs' encampment.

Then as suddenly as it started, it stopped. And in the silence we realised something else had stopped, too: William had finally dropped off. Wonderful. Maybe he is indeed very musical, beyond our knowing, and what he requires for a lullaby is a frantic blast of French heavy metal.

We visited Les Ferrailleurs' encampment a couple of days later. William's Lullaby Express turned out to be a massive scrap iron construction in the shape of a giant bird, wired for sound. A roc, no doubt. Ho ho. (Although specialists will tell me that rock and heavy metal aren't the same at all.) There's a photo of it at the top of this article. I expect you were wondering what it was. Now you know.

THIS MORNING the road through the village was closed again, this time to allow a brocante to take place along and over it. ('Brocante' is something like a car-boot or garage sale.) In appreciation of the beautiful new tarmac surface I bought une chéchia, a fez, from a stall-holder who'd spread his wares over the road. It seemed the only thing to do. Midsummer madness, I expect.

Les Ferrailleurs have gone now. So have the grandchildren, and we're missing them dreadfully. Not to the point of following them permanently back to Blighty.

Not yet, anyway. In any case, if I turned up at Portsmouth wearing that fez, UK Border Control would be certain to send me straight back to France as an undesirable alien.