The amazing story of the Chauvet-Pont d'Arc cave - episode one

In 1994 in the Ardèche region of France, Jean-Marie Chauvet and two friends explored an almost inaccessible cave close to the immense natural stone bridge of the Pont d’Arc. Here they made dramatic discoveries of paintings, engravings, and prints that had been forgotten for thousands of years.

Lit by the beam from a head-torch, lines of animals loomed out of shadows across the limestone walls of the cave – lions and bears, mammoths, bison and horses, all woven together across the fissures of the rock along with mysterious geometric symbols. And, immortalised in the clay, prints of human hands and feet provided a spiritual link to those ancient artists.

The discovery of the Chauvet Pont-d’Arc cave astonished the worlds of both archaeology and art history, not just because of its amazing animal paintings (425 individual animals from 14 species) but also for their quality, the techniques used and their immense age.  The style is almost reminiscent of Picasso - spare, simple, but loaded with feeling and meaning. Inevitably it makes us wonder about the skill and sophistication of our European ancestors, who were capable of imagination and activity way beyond what was necessary for mere survival.

Most of the paintings date to around 32,000 years ago, to the Ice Age and Paleolithic Aurignacian man - homo sapiens sapiens – who had essentially the same brains and DNA as ourselves.

But some of the images which adorn the cave walls were painted 36,000 years ago – a figure that’s hard to get your head around till you realise that as much time has passed between us and the prehistoric paintings in Lascaux as evolved between Chauvet and Lascaux – a staggering 18,000 years each.

Carbon dating has revealed that the Chauvet-Pont d’Arc cave was itself in use for around ten thousand years, until an earthquake caused falling rock to seal off its entrance almost completely. It is still hard to access, located close to the top of a limestone cliff in the timeless area of the Pont d’Arc bridge over the Ardeche river.

But this cave is important – it speaks to us of what it means to be human and may oblige us to reconsider our perceptions. Recognising that, the French government and Ardèche authorities are in the process of building a replica of the cave, where visitors can experience the temperature, atmosphere and the art itself. Archaeologists describe the cave as like a cathedral and everyone who enters it reports a feeling of being in a powerfully spiritual place. The cave was never lived in, it was clearly a centre for ritual and creative expression, so the plan is to allow visitors to experience that sense of awe and mystery.

The replica is part of a major visitor centre that will open in June 2015. In March this year I had the privilege of a preview of the site and I was really impressed – especially by the location, artistry and environmental sustainability of the scheme. Here I share an image of work in progress meticulously recreating the cave structure using metal frames, wire, plastic mesh and cement.

The French government has applied for UNESCO World Heritage status for the Chauvet-Pont d’Arc cave replica and a decision will be made very soon.

Meanwhile, if you’re visiting the region this summer, take a trip to the village of Vallon Pont d’Arc, where you can visit a small museum close to the square, devoted to the cave. This was created soon after the cave’s discovery and, although quite small, it gives you good information, images and a fascinating video.

Next month I’ll post an update on the UNESCO decision, all the latest information and more about the cave and its art.

The Chauvet Cave story, part 3: Exactly where is this amazing cave? 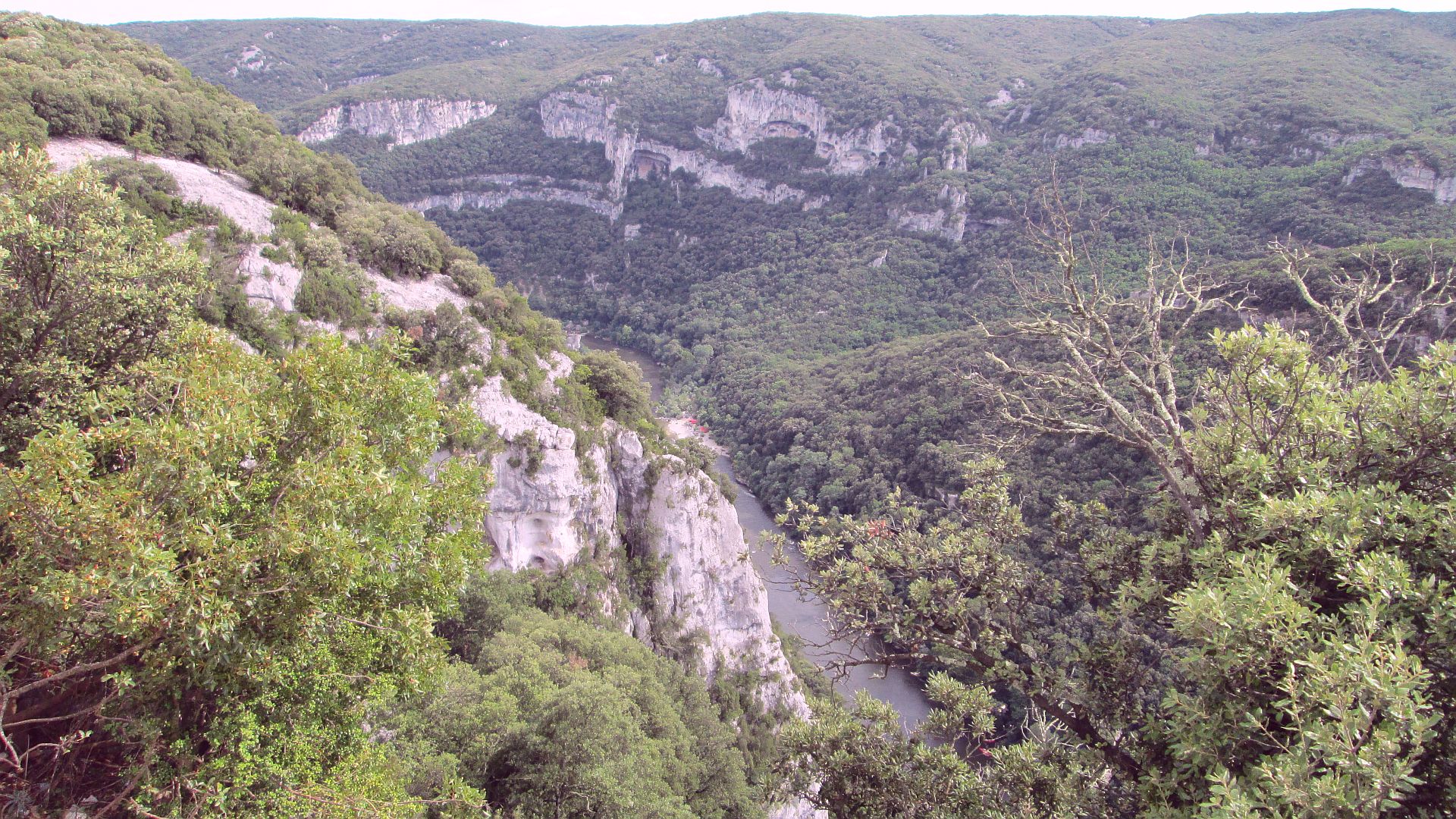 While I was in the Ardèche last month, I set out on a mission to find the actual location of the remarkable Chauvet Cave, with its 36,000 year old paintings. I wanted to know how it felt to be in the very spot where our Ice Age ancestors created remarkable art with such inspired creativity, to feel what was special about this place.

The Ardèche department is part of the Rhone-Alpes region and lies in south east France, roughly between the cities of Lyon to the north and Avignon to the south. Its own capital is Privas, a market town set amidst dramatic scenery of hills, forests, farms, vineyards and rivers that really typify the whole, sparsely populated area.

Read more: The Chauvet Cave story, part 3: Exactly where is this amazing cave?

In Puisaye, Burgundy, a team of fifty people have taken on an extraordinary feat: to build a castle using the same techniques and materials used in the Middle Ages. Now the Guédelon Castle project has inspired a five-part series on BBC2. Secrets of the Castle started this week and the first episode can be seen on i-player, with four more episodes to come on Tuesdays at 9pm.

This massive 25 year project has been described as the world’s biggest experimental archaeological site. It was conceived by founder and director, Maryline Martin, as both a living educational tool and an innovative way to create work opportunities for the long-term unemployed, offering skills and qualifications that would leave them with a trade for life.

The wood, stone, earth, sand and clay needed for the castle's construction are all to be found on the abandoned quarry site and Guédelon, unlike most other building sites, is open to the public. One of the project's principal raisons d'être is to demonstrate and explain to as many people as possible, the craftsmanship of our forebears.

To visit is to step over the threshold into the heart of a by-gone age. No harsh mechanical sounds, no engines running - just a natural environment that elevates the senses. Explore the site to the sound of metal on stone, the sawing of wood, horses' hooves on bare earth and the hammer striking the anvil - and watch all the trades associated with castle-building in the 13th Century at work. You’ll find everyone from quarrymen, stonemasons, woodcutters, carpenters and blacksmiths to tile makers, basket makers, rope makers, carters and their horses.

If every French house tells a story, do you have a tale to tell?

We talk all the time with owners of properties in France. Often it seems to us that almost every owner has a story to tell about how they came to move to France or to fall in love with their holiday home.

This is certainly true of two of our owners whose stories and houses are so interesting and photogenic that they have become the subject of major ‘real life’ features in the October and November issues of French Property News magazine.

The first story is set in Brittany, where Eileen and Brian Welch came across Le Faouet, which had started life as a 19th century  typically Breton farming hamlet, located close to a village in the Côtes-d'Armor region. “Although we had to virtually machete our way in, it was love at first sight. The former working farms were set in four and a half acres of beautiful land and the buildings were really derelict, but we felt ready to take on the job of restoring them.”

As it turned out, it was a further five years before Eileen and Brian were in a position to make the move - and to their surprise Le Faouet was still for sale. They moved into a caravan at the dilapidated property in March 1995 and set to work.

By July, the Welches managed to let out their first gite, then went on to renovate all the buildings and to create their own house and eight separate gites, which they let successfully for many years.

“Much as we love it here, we are both past retirement age now, so we have decided to put the property on the market and would love for somebody new to take over the reins and put their stamp on it.” Le Faouet is now on the market through French Connections.

Down in Corrèze, close to Beaulieu-sur-Dordogne, the story of owner Chris Jubb is very much a tale of real life, with all its twists and turns of fate. About 14 years ago, she and her husband Ken found Moulin d’Arnac in an estate agent’s files.

This riverside period water mill in an area of outstanding natural beauty had literally just gone on the market and the owner couldn’t be contacted, so Chris and Ken jumped in the car to see if they could find the property. After driving around without success, they spotted a man coming out of the Mairie and stopped to ask if he knew of the mill house. “Actually, Moulin d’Arnac is my house”, he smiled. “Follow me”. The rest, as they say, is history.

Three years after the Jubbs moved in, they were feeling settled and very happy in their new home and were running two gites – but Ken, who had a heart condition, died quite suddenly. “Everybody expected me to go back to England”, remembers Chris. “But this is my home and I was determined to stay. Almost immediately, my neighbours and people in  the village came forward with help and support.”

But now she feels it’s time to retire and move into a smaller house, so Chris has placed her beloved water mill on the market – although she doesn’t plan to go far, so devoted is she to the area. Moulin d’Arnac is now on the market through French Connections.

You can read the full stories of these two owners in French Property News magazine and see these and more features in our Press pages.

Do you have a story to tell for our France Stories blog? Whether you have a property for holiday lets or for sale, we would love to hear from you. Send up to 500 words, a photograph and your French Connections ID number to This email address is being protected from spambots. You need JavaScript enabled to view it.


Warning: count(): Parameter must be an array or an object that implements Countable in /var/www/vhosts/frenchconnections.co.uk/httpsdocs/modules/mod_weblinks/mod_weblinks.php on line 17