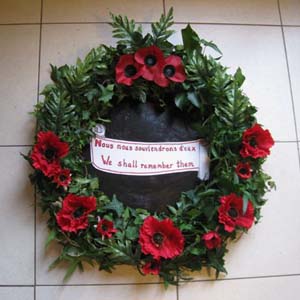 I SHAN'T forget 11/11/11 (Onze-onze-onze if you prefer it in French). An unusual combination of numbers. My son's birthday, as it happens. And a public holiday in France to commemorate the 1918 Armistice marking the end of the First World War. Unlike in the UK, when Remembrance ceremonies take place on the nearest Sunday to November 11th, in France the day itself is a public holiday marked by ceremonies great and small throughout the country. Our village was no exception.

We've never attended before. We've joined in most other national ceremonies, but not Remembrance. We've held back quite deliberately, feeling, maybe mistakenly, that it was too much of a French thing for Brits to be particularly welcomed at. Besides, in this part of southern France the Resistance is paramount. Ancestral memories can still poison relations between those families who collaborated with the occupying Nazis and those who joined the Resistance. Unhappy times. Not our business.

But this year it was different. Time, the ever-rolling stream, had moved on: Lazare Ponticelli, the last surviving Great War poilu (infantryman) had been borne away in 2008. No longer would any living person who had actually fought in the 1914-18 war be witness to the nation's homage. The last remaining British serviceman, Claude Choules, died earlier this year. Maybe for this reason the village maire, also a prominent local politico, decided that the 2011 Armistice ceremonies should include a UK contribution, to recognise the sacrifice so many hundreds and thousands of British troops in defence of France.

At the start of November Monsieur le Maire put out feelers among the various Brits living full-time in the village. One of us - not that we're a clique or anything like that, quite the contrary - appears quite regularly in Campbell's Diary as Indispensable William, partly because my whimsical nicknaming goes effortlessly into French as William l'indispensable and partly because of all the local Brits he and his wife Pamela have done the most to integrate themselves into the life of the village. In any case every calls him Bill (pronounced 'Beel'). After the last local elections Bill was appointed délégué européen - European delegate, as if you hadn't guessed - to the local district council. I don't think anyone's quite certain what responsibilities this appointment carries, and if you ask Beel he's likely to scratch his head and think for a bit. On official occasions he gets to wear a splendid blue sash, one that the deft-fingered Pamela made for him, with the EU emblem of 12 yellow stars in a circle on it.

M. le Maire is notoriously unspecific, which at least gave Bill a free hand to organise things in his own way. Poppies, now. They don't have them in France, at least not as a symbol of Remembrance: the French are often mystified by occasional glimpses on TV of Brits from the Prime Minister to the England football team wearing poppies in late October and early November. Pamela prepared a text explaining the origin and significance of Remembrance poppies, including the famous poem In Flanders fields the poppies grow, while Bill sent to the British Legion for enough poppies for about 50 people. He also made a wreath incorporating poppies, one that he as délégué européen would lay on behalf of the Brits at the ceremony.

Meanwhile M le Maire got on to me. He wanted music. This was easier said than done. Yes, I do conduct a choir, but while their excellence may be unrivalled in other fields all they can sing at the drop of a hat convincingly, in harmony, with feeling, without sheet music or rehearsal is Happy Birthday To You. H'm. In the end I decided that Last Post and Reveille would be much more to the point than listening solemnly to Elgar's Nimrod or getting the village Brits (there are only about 12 of them full-time) to sing Land of Hope and Glory. Josephine found recordings of the famous trumpet calls and recorded them on CD. It seemed to me that for it to succeed they had to be put into context, with a minute's silence between, followed by the usual declamation of Laurence Binyon's lines They shall not grow old As we that are left grow old. But would the French stand for this? Wouldn't we be trespassing? I submitted these ideas to the maire. There was no objection.

Then the word went round that M. le Maire wanted a piper. Not easy, you might think, to find a piper in the depths of the rural Languedoc? Step forward Archie McAllister, expat Pride of Lochaber, who lives in a nearby village and not only plays the pipes but runs a pipe band too.

So at 6pm on 11.11.11 all the participants, maires from the neighbouring communes, representatives from the French armed forces in No.1 uniforms, flag-bearers from the local branches of the anciens combattants association(the French equivalent of the British Legion) and members of the public including a contingent of about a dozen Brits assembled in the Mairie. Bill distributed poppies, which the French, intrigued by this little corner of Britishness, pinned on with great pride.

By now it was dark. Some wondered why the ceremony hadn't been held at the traditional hour of 11am. Every village holds it own ceremony, and as often the same people are involved (Archie had already played at two other ceremonies), the local villages take turns at the 11am slot, our village coming last. We followed the flag-bearers up to the village war memorial.

There's a set routine for French Remembrance commemorations, all very military and spit-and-polish. It starts with wreath-laying, and Bill, resplendent in blue sash, laid his wreath alongside the others with quiet dignity. A few speeches were made, including a universal letter from President Sarkozy. Then the dignitaries stepped aside to allow the British contribution to begin. A local lady called Lucille read Pamela's French text. Bill added In Flanders field the poppies grow, with Lucille translating.

Christopher and Josephine lead the British act of RemembranceI stepped up to the microphone in great trepidation. Could I really do this? I invited all those present to share in the heart of the British Remembrance ceremony, asking the military representatives and the flag-bearers to stand to attention. The Last Post sounded over the PA system, as pre-recorded by Josephine. A few moments of silence followed. I noticed the military representatives were saluting. A monstrous wave of emotion swept over me. How could I possibly be worthy of doing this? I'd never worn uniform, except as a cadet, many years before, and that wasn't by my choice. What was I doing there? Reveille sounded, and when it had finished I recited They shall not grow old, As we that are left grow old. I didn't think I could do it. My voice was on the edge of breaking. Josephine beside me read the translation into French, line by line. I asked all present to repeat the last line, We will remember them, in English. They did, French and British alike.

Then Archie, accomplished piper, played a lament and I was glad to retreat to the shadows. The French ceremonial proceeded impeccably, the Marseillaise coming in at the climax.

You'll excuse me if I finish on a more serious note than usual? I've lived in France for 20 years now. In all that time France has been very good to me. France has seen me through heart surgery and has kept me alive and kicking ever since. France saw me through a short period of unemployment. Various local honours have come my way, mostly in the form of enormous clunking medallions awarded in appreciation of literary and musical activities. Thank you, France: but there has been no greater honour than to participate in your November 11th ceremonies.