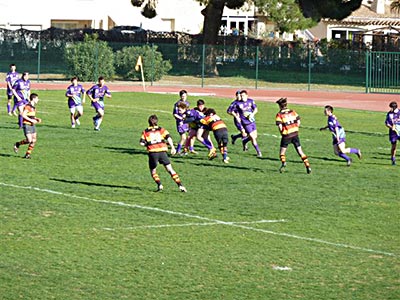 IT'S NEARLY 21 years since I came to live in France. In all that time I've attended a mere four sporting events. A couple of village football matches. A now-you-see-it-now-you-don't flash-past of the Tour de France through the village. Once to Montpellier to watch an opening round match of the 2007 Rugby World Cup, a contest of excruciating dullness between Tonga and Samoa. No, I can't tell you who won, I'd have to look it up.

But now there's a fifth to add. A few weeks ago I had an e-mail from Jon, a cousin by marriage, a real cri de coeur. He was accompanying the junior section of a Kentish rugby club on a mini-tour of the south of France, passing quite close to where we live. Somehow or other their first night's B&B arrangements had fallen through: could I possibly magic something for them? There would be twenty-three 15 and 16-year-old lads, among them his son Matthew, which makes him my first cousin once removed, and 4 adults looking after them. They would have been up since 3am, they would have to have somewhere to lay their weary heads that night, and so on.

You can't leave cousins in the lurch, can you? The message came in at about 9 o'clock one night. I promised to mobilise all the local Offices de Tourisme in the morning, and went to bed wondering how, if it came to the push, we could best fit 27 rugby players, men and boys, in our sitting room to sleep. And how best to clear the atmosphere the next morning. And how much toast to make them for breakfast.

But it didn't come come to the push. (Nor did it when it came to scrum down, but more of that later.) Overnight a second e-mail came in. The problem had been fixed. You probably heard our gasps of relief where you live. They'd found a hotel in the small town of Pézenas, about 50 minutes from here. It couldn't have worked out better: they were playing in Pézenas that afternoon, and would we like to watch the match? They had a fixture against a team called Salagou-Larzac. Salagou is a lake, Larzac is a limestone plateau mostly inhabited by sheep, so we didn't quite know what kind of opposition they would provide, but we said yes, we'd very much like to go.

So we did. Along the valley, over the hills and down the other side on to the coastal plain to Pézenas, a small town famous locally for its connections with Molière, the great 17th century French playwright, who based himself there, probably very unhappily, for a while in the 1650s. We found an impressive sports centre, remarkably well-equipped and extensive for a small town. The rugby pitch was actually equipped with a stand. We made ourselves known to Jon, wandered on to the pitch to say hello to Matthew, who in the presence of all his team-mates was probably embarrassed to have his hand shaken by this elderly couple, but at least we didn't kiss him, which we would have done if we'd all been French. We made our way back to the stand and found ourselves seats overlooking the half-way line.

I DON'T know why rugby has taken such a hold in this part of the world. The image of heaving, sweating, grunting blokes with boots the size of violin cases doing licensed violence to each other doesn't tally very well with the image of the south-west of France as a sun-kissed land of plenty, where the summer heat shimmers with the song of the cicada, where the drowsy siesta is wakened by the clack of boule on boule beneath the acacia trees in the village square, where the wheeling house martins flash and dip as the velvet evening lengthens into the indigo night and the level in your bottle of rouge declines as the clock advances to midnight. Not only do they play rugby union, most towns will have their rugby league teams as well, called treize here, i.e. thirteen. Many of the French national team, les bleus (the Blues), come from clubs in this area, Perpignan, Toulouse, Castres, Biarritz. Some have unpronounceable Basque names, Harinordoquy, Accoceberry, despair of UK rugby commentators.

Rugby in France has a strange history. It was started by some English immigrants in Le Havre in 1872. It spread to Paris, and the first club championship final, between the two leading Paris clubs, was refereed by no less a person than Baron Pierre de Coubertin, founder of the Olympic Games. It spread slowly to the south, where it has stayed ever since. No one, as far as I know, has ever successfully explained what it is in rugby that appeals to the character of the people of the south-west of France.

MEANWHILE, AT Pézenas Matthew's team was getting a bit of a hammering from the lake and sheep-plateau lads, who turned out to be a nifty and well-trained outfit kitted out in purple and grey. The Kentish lads wore tops hooped in red, black and yellow, black shorts and . . . wait for it: sheer, silky-looking black or green tights. This was puzzling. I thought for a moment, and then said to Josephine, "Wily lads, these: they've put girls' tights on for slipperiness, so that they can wriggle themselves out of tackles. Like eels. Clever, eh?"

In the stand we felt a bit sandwiched. In front of us, on individual seats, were parents of the French lads, who mostly seemed to know one another. Behind us on the bleachers were row upon row of local lads, loud and lusty, shouting, cheering, hurling abuse at the useless and despicable English lads, but very commendably applauding whenever they scored a few points. I'm afraid we were as out-shouted as the Kentish lads were outplayed. The final score was 31-12.

After the match we thanked Jon for inviting us. He felt his team had left the field with heads held high and honour bright. The lads had been taken by surprise by one or two local rules: no pushing in the scrum (so what was it for?), no penalty kicks, nothing to prevent a static human pyramid at line-outs instead of assisted jumps. (If you aren't a rugby player and nothing interests you less than technicalities of rugby, you can skip this bit. Oh! You already have? I see...)

"Why were they wearing tights?" I asked Jon. "Was it to help them wriggle free from tackles?"
"Oh no," he said. "It was just something the lads thought up. It was more of a fashion accessory."

REGULAR READERS of this column for the past 12 years (yes, it's been going that long) will perhaps remember occasional mentions of Jean-Marie Gosset, the floury-handed village master baker who has so faithfully risen with the nightingale and gone to bed with the lark to provide the village with its daily bread. He's decided to retire. There's another baker in the village, so the bread supply continues uninterrupted, but M. Gosset's wonderful wholemeal loaves and other delights will long be remembered. Longer by some than by others, it would seem: at the moment of writing this, the door of his little shop hidden in the middle of the village is closing for the last time, while in our freezer are no less than 18 loaves. Should keep us going for a bit. Unless of course Jon and his lads descend upon us unexpectedly.