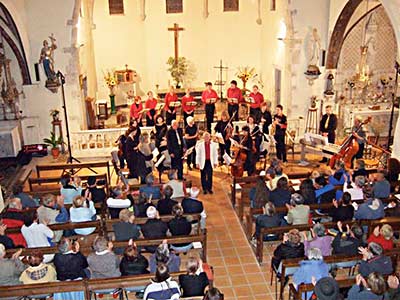 AT MIDSUMMER thirty years ago the French Minister of Culture instituted an annual nation-wide music bash called La Fête de la Musique. The minister was - and still is - called Jack Lang, a name that looks as if it ought to be English. Now 72, he's never strayed very far from the French political scene. It may be that La Fête de la Musique will be his lasting memorial, because at the recent general election he lost his seat in the French parliament, much to his chagrin, and I daresay anyone humming Auld Lang Syne in his hearing will be dealt with appropriately.

Anyway, he takes the credit for this annual music festival, although I understand the original idea came from a Paris-based American, Joel Cohen. Lang made certain stipulations: all concerts should be public and free, all musicians, amateur or professional, taking part should do so gratis, all concerts should be accessible to everyone. The upshot of all this was that most concerts take place outdoors, in the streets or in public places. So on Midsummer Night, or the Saturday nearest to it, France rocks.

La Fête de la Musique was eagerly taken up in France, and spread to most of Europe and beyond. Being very closely involved with local music-making, I've always needed to keep a careful watch on musical activities in the area, to make certain that any music I'm responsible for doesn't clash with other local manifestations. If it complements local goings-on, so much the better. Vive la musique!

SO IT was with great pleasure that months ago my little choir, Les Jeudistes, accepted an invitation to perform on the nearest Saturday to the summer solstice in a remote chapel lost in the middle of that desolate area called Les Corbières. Les Corbières are the north-eastern foothills of the Pyrenees, right down there on the map where Mediterranean France cosies up to Mediterranean Spain, where the coastal strip is busy enough but where the hinterland is a desolation of scree-strewn limestone humps intersected by the occasional green valley and sparsely dotted with close-clustered villages.

The Pic du Bugarach: safe from the end of the world?

It's an unusual area altogether. The highest point, the Pic de Bugarach, is supposed to have magically protective qualities. According to those who believed that the end of the world had been arranged for December 15th last, or for last May 12th, the only place in the entire world where you could be guaranteed continued existence was the Pic de Bugarach, failing that the nearby village of the same name, where I understand house prices rise and fall with the imminence of the end of the world. But the local Corbières wine, full, rich and heady, fortifies you against well against ends of the world and other upsets.

The concert we offered was pretty full, rich and heady, too. A good amateur choir accompanied by string orchestra isn't something that turns up gratis on your doorstep every day. A few days before the concert we rehearsed with the orchestra in Perpignan, the regional centre, and afterwards took the winding Corbières lanes and hill-roads to locate the lonely chapel in which we were due to perform. We found it, as the French say, au bout du monde, at the end of the world. Very suitably, in view of the preceding paragraph. A terrific thunderstorm greeted us. A Sign from Above?

It was pitch dark inside. Tiny windows, no electricity. The organisers would have to instal a generator for us. This appeared to pose no problem, but I wondered about the noise. By torchlight and the occasional flash of lightning and Josephine's camera I counted the chairs. There were 40. Otherwise there were benches. This told its own story. No one in their right mind would want to sit through an hour-long concert without a back-rest. We could expect no more than 40 of an audience, probably considerably fewer. H'mm . . . but the acoustic was brilliant, and I could hardly drag my sopranos, altos, tenors and basses away from the pleasure of singing in such a marvellous resonance. Besides, the storm was still raging.

A few days later the organisers telephoned to say they would have to go back on their invitation. The concert would have to be cancelled. They were very sorry. Surprised, I asked why. It was on account of La Fête de la Musique, they said: there were other events locally, there would perhaps be 7 people, 10 at the most, coming to hear us, it just wasn't worth it. It seemed a bit much, to have a concert cancelled because of La Fête de la Musique. Not the end of the world, I suppose, but enough to make me wonder if Jack Lang would have appreciated the irony of it.

BUT WE made up for it, and we will make up for it. On the solstice itself we gave most of the intended programme in a private house, one with a large enough salon for about 60 people plus choir to instal themselves comfortably. It was a lovely occasion. Not only was it midsummer, there was a birthday to celebrate. And the newish owners of the house had wanted something special by which to pendre la crémaillière. Now there's a mouthful of France's best for you . . .
. . . pendre la crémaillière literally means 'to hang the cookpot hook'. It refers to the arrangement of wrought-iron spars, chain and S-hooks up the kitchen chimney, the apparatus for suspending the cookpot at the required height over the kitchen fire, and it's the French expression for 'house-warming'.
And then, many years ago, before I came to live in France it seemed to me in my rose-tinted and over-romanticised way that nothing could possibly be finer than to spend one's summer holidays touring round the endlessly fascinating villages of the south of France giving concerts. And now, here I am, a quarter of a century further on, doing exactly that. It's a busy month for music, June. A couple of Fridays ago the Hoboken Trio (piano, violin and cello) came down from Paris to perform some music I'd written for them, a kind of musical strip cartoon about our village and its surroundings, to an audience larger than I could ever have dared to hope for 25 years ago.

In a day or two, just too late for inclusion in this month's Campbell's Diary, we'll be giving the concert we would have given in the Corbières if it hadn't been called off. The venue's a little 9th Century chapel, the Prieuré de St Julien, a magical place set among the vineyards, with wide views over our valley. The night should be velvet, the musicians well rehearsed, the concert is free, and the whole occasion should remind me what a privilege it is to be able to make music in these wonderful surroundings. And how Fate has dealt me an undeservedly generous hand. Fate de la Musique, that would be, of course.