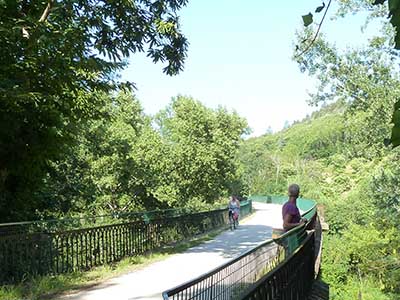 IT WAS agony, I can tell you. Without going into unseemly detail, it seemed to me only too obvious that I was going to have to walk bow-legged, like a jockey put out to grass, for the rest of my life.
You can hire bicycles in the village, at a place called Oxygène, which is just a shed with a lot of bikes of different sizes in. I suppose it takes its name from the vast amounts of oxygen you need to cope with the mountain tracks this area abounds in. Oxygène relies for its custom on a local feature I've often mentioned before, the old railway line which runs along the valley for miles . . .erm, kilometres and kilometres. Some years ago they took up all the tracks, laid a fine gravel all-weather surface and encouraged its use by cyclists, riders and walkers, and I have to say it has been an entire success. They call it la piste verte, the green track.

But one hot July day soon after la piste verte opened I was persuaded by nearest and dearest to shake myself out of my pool-side lethargy, trot down to Oxygène and hire bikes for a little outing to St Pons, 12 miles . . .erm, 18 kilometres up the valley. UP the valley, you notice. Stopping in St Pons, remarkable for being not much more than a village with a vast cathedral plonked in the middle of it, a relic of some long-vanished historical importance, for a beer before starting the return journey seemed an attractive idea.
Oxygène supplied me with a brand-new bike, gleaming and sophisticated with go-fast stripes, but with a saddle that looked a bit like an iron. Or maybe the sort of anvil that cobblers use to rest shoes on while they hammer nails into them. Monsieur Oxygène looked doubtfully from my shorts to the saddle, and back again. Was that what I was planning to wear? Of course, I said. Didn't I have any cycling gear? he asked. It seemed a strange question to me. I hadn't ridden a bike for years and years, not since I used occasionally to borrow my daughter's broad-saddled, deliberately Miss Marple retro, sit-up-and-beg bike to cycle to work. Monsieur Oxygène looked uneasy. He may even have winced.

The first mile . . .erm, kilometre or two (I promise to stop this tiresome metric indecision from now on) went superbly well. The gradient was almost nil, we rode through shady cuttings, dense chestnut woodland, through sun-drenched vineyards and cherry orchards, over bridges and viaducts with superb 19th-century wrought-iron parapets, all with a sense of freedom from having no motorised traffic to have to take account of. And the views!

But then a nagging doubt set in. That saddle . . . my perineum . . . something was very wrong. Had I been given - please excuse me - a bum steer? Every pedal-push became more uncomfortable than the one before. Not even the old railway tunnels, lit progressively as you advanced, could take my mind off the pain. Standing on the pedals gave the only relief. Eventually we arrived in St Pons. I couldn't even sit to drink my beer.

FOR THE two July weeks of the Tour de France we spent hours being couch cyclists, wondering what on earth had happened suddenly to UK cycling that Brits could so dominate the event. On the French TV channels we found the commentators running out of French-speaking winners to interview. I don't think any provision had been made to ensure interpreters on the finish line, although I believe Cav and Wig speak some French. The most dramatic moment came in the stage nearest us, running along the Mediterranean coast from Sète to Cap d'Agde.

Sète is France's second largest Mediterranean seaport (the largest is Marseilles). It's a mix of a commercial port particularly featuring ferries to North Africa, a seaside resort with thousands of seaview flats, and a small mountain called Mont St Clair, originally a volcanic island, covered with pines among which can be glimpsed the villas of the rich.

It's stale news now that some miserable so-and-so scattered carpet tacks on one of the steep lanes on Mont St Clair, causing multiple punctures. Bradley Wiggins, wearing the maillot jaune of the overall race leader, escaped puncture, but the peloton (a word that's recently passed into English; its primary meaning is 'ball of wool') was badly affected. The stage leader, a Spaniard, was well away and uncatchable, but to allow the peloton to reform Wiggins and his Team Sky colleagues deliberately slowed up progress until the punctures had been patched and normal service could be resumed. Of the tactless Frenchman who took unfair advantage and broke the cordon we make no mention.

For this Nelsonian touch Bradley Wiggins immediately became known as le gentleman in the French press, very appropriately borrowing an English term to express sporting unselfishness and a disdain for kicking rivals when they're down. It helped, of course, that Wiggins was overall leader, but I felt immensely proud to be the compatriot of someone who, together with his colleagues, had restored a certain upright cleanliness to a great sporting event that has been extensively and undeservedly tarnished in the past.

ON THE return journey down the valley from St Pons the gods, especially Gluteus Maximus, smiled on me. DOWN the valley, you notice: I managed to freewheel nearly all the way. Admittedly, that meant standing on the pedals, occasionally taking a cheeky little rest on that brute of a saddle. I began to enjoy it, the mingled summer scents of warm earth, pinewoods and cherry orchards, the contrast of shade and August sun, the endless song of crickets and cicadas, the swish and splash of the river, the different angle of taken-for-granted views so often seen from the car.

When, by now bow-legged, I returned the bike to Monsieur Oxygène, I mentioned the fundamental problems I'd encountered. Yes, he said, he thought I might suffer a bit. If I proposed to cycle regularly, why didn't I buy myself the proper kit, with all those strategically-placed pads and shock absorbers? I smiled wanly.

I haven't, of course. I leave all that to the experts.