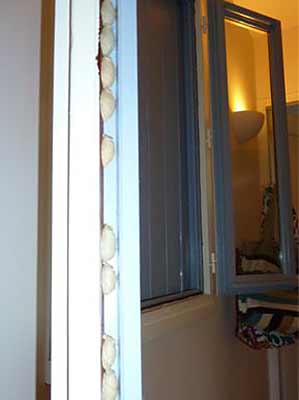 YES, WELL might you wonder what this is. You see, we sometimes get the feeling that we aren't alone in our house. Especially at this time of year. Do you ever feel the same? On the face of it, officially, according to the electoral roll and list of local taxpayers, Josephine and I are the only people who live here. But in compiling the definitive list of inhabitants we could hardly forget Pinot the cat, who would be black (and white) affronted if he knew he'd been left out.

It's not a creepy feeling, nothing like that. No ghoulies, ghaisties or things that go bump in the night. For one thing - with Hallowe'en in mind - we're protected: when we built this house about eight years ago, an expat friend remarked that in his part of the world it was customary to fix a hot cross bun to the highest point of the roof frame. As it happened the roof trusses were being put up at Easter time that year. Our friend - oh, you know who him, he appears in this column often enough: Indispensable William, the retired baker - even supplied a freshly-baked hot cross bun. It was the work of a moment to ask Alain, one of our builders, to climb up to the apex with hammer and 10cm nail - a French nail, of course - and do the deed. It's still there, that hot cross bun. A month or two ago I was up in the loft space, and there it was, untouched. And by this time of a hardness to be measured on the Moh scale, guaranteed to shatter the teeth of any iconoclastic mouse.

But it's not mice, although Pinot brings them in now and again, mostly at about 4 o'clock in the morning. He's not that overburdened with brains and they usually manage to outwit him. Then there are fun and games trying to catch Monsieur/Madame Souris before he/she discovers that our house is well snug, warm and dry, guaranteed free of evil spirits, better than a hole in the ground any day. Better still, Pinot's biscuits, called croquettes here, are there for the scrumping. Next thing we find is that Monsieur/Madame, or both, have moved into one of Josephine's slippers for the winter. Unless we've caught them, that is, and put them outside. For Pinot to have another go at.

No, up there in the photo are the real illegal immigrants, the ones that have moved in for good. They're potter wasps, nothing to do with the stinging variety. I suppose it's our fault that they're there, because on the south-facing, sunny side of the house we tend to leave the windows and the shutters closed all through the summer. If we didn't, we'd soon stifle to death in the torrid heat. But those potter wasps have found a way in through ventilation holes in the window frame, just above the sill. They've explored inside. They've found a vertical gap, like a chimney, between the two window frames. And here they've made their little urns out of mud, nine of them, one above the other.

We discovered their little secret as summer flew away with the local swallows. We opened the window and the shutters . . . I'm afraid we broke one or two, quite unintentionally, but they showed us what was inside each of these delicately constructed little urns. A larder of tiny paralysed insects, mostly minute spiders. A wasp grub, munching contendedly at the ready-made meal its parent had left it.

Now, the question is, what would you have done? Would you have brushed the whole lot away, hoovered up every last shard, grub and spider carcase? Or would you have just left them where they were and let Nature get on with it? And before you answer, please consider that it wasn't just the wasps: we had the bees too.

These immigrants are mason bees. This one - Beeb the Builder? - has found one of the ventilation holes in our kitchen window frame. She's lined the hole with mud, put in a thick bed of pollen and has laid eggs. Again, what would you do? Clear it all out with a screwdriver, or leave it bee and put up with a little less ventilation?

I WOULDN'T want you to think that we kept open house for insects, that at the start of winter we put up a B&B (ho ho) sign for all comers. Far from it. The other day our friend and neighbour Hector turned up - by arrangement - with a contraption he'd fashioned. Hector keeps bees, several hives of them on his land, between our house and the river. Like all French beekeepers, he's worried by the slow invasion of Asian hornets. Asian hornets eat bees like you and I would eat Smarties. They lurk by the entrance to the hives and just pick off bees as they fly in and out. Not good. The invasion started in Provence, well to the east of the Languedoc where we live, but is gradually moving northwards and westwards. What with various bee epidemics and the noxious effect of certain agricultural chemicals, beekeepers in France (and elsewhere) are having a hard time of it. For some, Asian hornets are the last straw. Hector combats them with strategically placed traps. Here's the one on our land:

Inside the hive there's only a frame with some rather manky-looking honey in it, not the sort of thing you'd want to spread on your toast in front of the fire on a winter's night. But the scent is enough to suggest to passing Asian hornets that there's a meal at hand. They can't get into the hive, in fact, but it doesn't matter: in true French fashion, whereby it's unthinkable to start any meal without an apéritif beforehand, they make for the bottle.

The bottle contains a centimetre or two of odd bottom-of-the-glass leavings of wine and beer and no doubt a few drops of evil spirits mixed into a noisome liquid redolent of the spit-and-sawdust bar, irrestible to Asian hornets. They find their way through the piece of plastic tubing - you can see the end of it in the photo - which itself has other holes drilled in it inside the bottle. Led by the nose they find the evil brew, but not the way out. They're trapped and eventually they drown.

Or that's the theory. I've been down to the trap every day since Hector installed it. The score? Nil. H'm. Hector has an idea that the local Asian hornets have a nest in some pinewoods on the other side of the valley, not so very far as the bee buzzes, from which they range far and wide in search of hives. I wonder. It wouldn't surprise me to find they'd dossed down for the winter in our roof, or in some of the other crevices of our house. Everyone else seems to have.