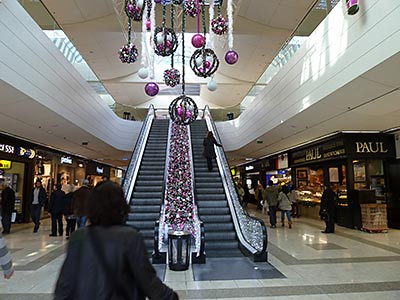 NO, IT'S not easy, writing a Christmassy piece before Christmas has come along. It just makes you think, though: all those Christmassy bits in the media must all be illustrated with pics from earlier festive seasons. They have to be ghosts of Christmas past, don't they?

We went to Montpellier the other day, towards the end of November. It's the big city for us, 90 minutes distant, over the hills and far away. (Montpellier? 250,000 people. Huge university. Teaching hospitals, a tradition stretching back to the 14th century. Centre of regional government. Municipal opera. Heineken Cup rugby team. Ever-expanding public buildings and tramway system. Showcase of modern civic architecture. Flourished under the leadership of the charismatic (and late) Georges Frêche, slow decline since. French premier league football champions 2011, under the aegis of a local man, Louis Nicollin, boss of the privatised municipal cleansing contractors. Oh yes, and according to Arthur Conan Doyle, Sherlock Holmes came here incognito, in that mystery period between being wrestled into the Reichenbach Falls by Professor Moriarty and his Return, to study coal-tar derivatives. Just thought you might like to know.)

It's by far the easiest city probably in the world to get to the centre of by car. (If you know of an easier, please let me know.) Turn off the autoroute A9 at junction 29, follow the mile-long dual carriageway Avenue Pierre Mendès-France, a couple of sets of traffic lights and a roundabout (I'm assuming that you've long since come to grips with French roundabouts - if you haven't, please don't practise in the UK), and there you are, in one of the city centre's many underground carparks.

What you're going to see when you come up to the surface is a question many moles must ask themselves. By this time, after a good fifteen years'-worth of visiting Montpellier about once a month, we have our own rat runs and beaten tracks, lifts and escalators. And yes, surfacing by escalator from the multi-storey car park beneath a city-centre shopping mall called Le Polygone, there were the colours of Christmas 2012: deep pinks, mauves, purples and burgundies, set about with gold and silver and light blue baubles, bangles and beads.

Of course, it may all be a subliminal nod in the direction of the local wine trade, but this thought wasn't uppermost in my mind as I strolled about, with time on my hands waiting for Josephine to emerge from her acupuncturist's. No Santa (known here as Le Père Noël graced his grotto as yet . . .

. . . and just as well, because Santa's traditional reds and whites would have clashed horribly. (And I note that in the present UK scandal climate Santas and grottos seem to be beating a tactful retreat. Debenham's have banned them, apparently, under the pretext that too many Santas confuse children. Barely a mention of all that sad business in France.)

Outside, in the massive traffic-free central square, La Place de la Comédie, workmen were beginning to put up the chalets, at least a hundred of them, the length of the tree-lined Esplanade Charles de Gaulle, and I expect they'll spill out on to the Place de la Comédie later. Anyone can hire a chalet, not much more than a booth, to sell whatever, table decorations, Santa outfits, nougat, vin chaud (hot spiced wine), hams, toys, felt hats, cheese, lanterns, carvings, soap, sweets, candles, baubles, bangles and beads. All this goes to make up the Montpellier Marché de Noël, Christmas market. And if I were a small child visiting Montpellier at this time of year, I think there would be a lot of sleeve-tugging to be allowed a go on the carrousel . . .

. . . although in fact it's there all the year round, a traditional roundabout with music - unexpectedly but delightfully - ranging from Vivaldi to Johann Strauss.

HOME TO Olargues, our village. The nearest we get to a public escalator is the Escalier de la Commanderie, the only example of a stepped and vaulted main street known to me.

The village is built on quite a steep hill. The village lanes more or less follow the contours, so this stairway is the only straight up-and-down passage. The stairs in the photo continue up for six similar flights, until you find yourself outside the church. In a few days' time they will cover the space on the left of the photo above, a sort of grotto, with straw, ready to receive life-size cut-outs of shepherds, angels, wise men, cattle and donkeys and sheep and of course Mary and Joseph. The figure of the baby Jesus, absent though Advent, appears magically on Christmas morning, placed there by an unseen hand.

At one time my small choir used to sing carols on the first landing. I don't know why we stopped. Maybe because on a freezing winter's night those sheep weren't as foot-warming as they appear to be.

Carols in the cold

And in a few days' time the municipal employees will be going round the village putting up the municipal decorations, stringing neon frames across the street, with images of wrapped presents, stars, Santas, reindeer, Christmas trees and the message Joyeuses Fêtes, Happy Festivals, thus including Christmas with New Year. I don't know when the village council bought them. They haven't changed since I came to live here 15 years ago. But then one of the most appealing aspects of Christmas is its timelessness.

BUT THE big question is, will we be there to enjoy it? Not just Josephine and I, but everyone else, including you, gentle reader? According to an ancient Mayan calendar, the world is coming to an end on December 21st. Total destruction everywhere, except . . .

. . . in one place, a Pyrenean outlier not so very far from here (we can see it on our way to Montpellier) and the obscure village at the foot of it. It's called Bugarach, a name you have to take care pronouncing in polite company. For some reason the mountain, uniquely in the entire planet, offers shelter and protection for those who would prefer the world not to come to an end just yet. If you want to find it on the map, it's actually called Pic de Bugarach.

It looks pretty steep to me. No stairs. Not an escalator in sight. However I understand there are lots of grottoes in the rock faces, but I don't think you'll find any Santas in them. In fact I don't think you'll find anyone at all, because the Prefect (a sort of Government officer with wide powers: he or she directly represents the President of France) has taken the business seriously enough to put the Pic de Bugarach out of bounds for the period in question. And the village Maire will be closing off access to his village on December 21st.

So presumably the only people to be saved will be the gendarmes patrolling the Pic de Bugarach. As to what actually happens, I'll keep you posted . . .erm, hang on a minute: in the circumstances, it might be unwise to make any promises.