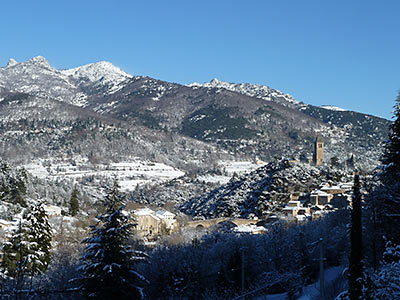 YOU WOULDN'T think this was the south of France, would you? Yes, all right, the sun's there, and brilliant blue skies, but where are the poolside loungers, the shady terrace with the pastis asking to be poured, the shorts and the T-shirts and the straw hats, the table under the mulberry tree with the daily baguette, the camembert and roquefort cheese, the local sun-warmed tomatoes and peaches, the glass or two of local rosé?

(And if all this is making your mouth water and your intuitive escape mechanism whirr into overdrive, you'd best backspace a bit here on the French Connections site and get your summer holiday booked. You could do it right now: go on, why not? I don't mind waiting . . .)

Summer visitors sometimes ask us what the winters are like here in the Deep South. They're very varied. In some winters it's been warm enough to eat outside on Boxing Day. On the other hand, last year a temperature of -12 carried off our lemon tree. But snow is quite rare, which is why Josephine got the camera out the other morning and captured the idyllic snow scene above, while it lasted. She took it at about 10 o'clock in the morning and apart from the 4000' mountaintops most of it had gone by teatime.

Teatime? Ah yes, teatime. Did you know le five-o'-clock exists as a perfectly acceptable French term? Pronounced 'le feevoclock', naturally. (There's another, more common French expression for an official between-meal snack, le goûter, but we'll stick with le five-o'-clock for now.) 5pm is when we assert our essential Britishness, going through the daily ritual of putting the kettle on, making tea (an agreeable mix of Early Grey and Lapsang Souchong), putting one or two Brit chocolate biscuits on a plate, or a couple of slices of Josephine's boiled fruit cake or Indispensable William's chocolate Yule Log, or even toast and honey or Marmite, and settle down by the fire for half an hour or so. Mmm . . .

SOMEWHERE UNDER all that snow, on the edge of the village, Nicolas has his  firewood yard. Every spring I get in touch with him to order our firewood for the coming winter: always in spring so that the wood has all the fabled summer of the south of France to dry in. The order's always the same, 2 cubic metres of ash and 4 of a wood that's called chêne vert, which is the variety of evergreen Mediterranean oak that partially covers the mountainsides here. As you can in the darkish green patches in Josephine's photo. What wood to choose is vital . . .

. . . especially as one of the ironies here is that the greyish, leafless forest you can see when you lift up your eyes to the hills is all chestnut - sweet chestnut, that is, not conker trees. Chestnut trees grow like weeds and almost as fast, and a couple of days with chainsaw and trailer would give us a winter's wood for next to nothing.

But we'd have to be in desperate need to burn chestnut. If I drew up a table of the best firewoods, it would go something like this:

1. Hornbeam: It doesn't grow round here, so that's out.
2. Holly:  In the garden of another French house, one I lived in 20-odd years ago, a previous owner had planted a row of about a dozen holly trees on the top of a very high drystone wall. Not a very sensible idea: as they grew in height, so the roots grew deeper, and the row of holly trees threatened to bring the wall down, especially in high winds. At the time I was friendly with the chief of the local fire service because we both sang in the same choir. I mentioned the problem to him, just out of interest. A couple of days later a team of firemen turned up with chainsaws, ropes, blocks and tackles, cut them all down, and cut them all up into 50cm logs. This was entered in their log-book (ho ho) as 'training'. A couple of bottles of grateful pastis changed hands. That wood, once dried, lasted me two whole winters. It's a very dense and slow-growing wood, sweet-smelling when burning, and I have the greatest respect for it. But it doesn't grow round here, and as far as I know the local fire chief doesn't sing.
3. Chêne vert
4. Ash
5. Beech
6. Cherry
7. Oak
8. Robinia (False Acacia) -

- and to cut a long list short, chestnut comes in at about No. 101. It stinks, it emits foul mephitic vapours, it spits dangerously, it doesn't burn hot or right through, it's so tannin-rich that it discolours glass fire doors, and all in all it's a dead loss.

Nicolas, a cheery soul, tips his lorry load in front of the garage, so that no one can get in or out until we've borrowed our neighbour Hector's motorised wheelbarrow and have built the woodpile, an all-hands-on-deck annual ritual.

THEY'RE QUITE something, these French fireplaces. Very sophisticated. They call them foyers fermés, enclosed hearths. Ours is made, like most wood-burners, of cast iron, and it's really a box which tapers upwards into the chimney. They all have glass doors, and some have a complicated mechanism with chains, pulleys and counterweights which lift the door up into the chimney breast and drop ot down again when required, something like that other well-known French invention, the guillotine. Ours is much simpler: the door is hinged at the bottom and slides into a recess under the fire box when we want to toast our toes by the open fire. The bed of the firebox is slotted to allow ash to fall through into a removable tray underneath.

Among the equipment that came with it was a kind of griddle, one that's supposed to slot over the fire on the side-wall lugs you can see in the photo. We've never had to use it yet, but it's comforting to know that if all else fails, gas/electric cooker, underfloor central heating, hot water boiler, we could keep the home fire burning and still turn out a hot meal or two.

And all this reminds me. My French is competent, Josephine's is excellent (she has a Cambridge degree in it), but despite our joint linguistic ability we can't come up with the French for Brrrrr!

Maybe there isn't such a word. One of my teachers years ago had a little wheeze (that's to say a mnemonic - I don't remember anything being wrong with his chest) by which to remember the seasons in French. I can't remember what he had to say about printemps (spring), été (summer) or automne (you've guessed it), but as for winter, it was hiver (pron. 'eevair'), when you sheevair.

Clever, eh? But there's no sheevairing by our fireside. Ah! There's Josephine calling me for le five o'clock. Must go. Ciao, as they say round here.