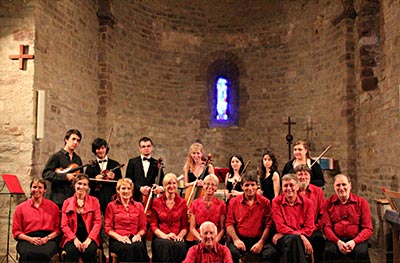 ABOUT FIFTEEN years ago, in the days when I used to run a big choir rather than Les Jeudistes, the select group pictured above, we had a bass called Edmond. He was an elderly man of very definite and individual views who occasionally had to be shushed because of some outrageous politically incorrect statement with which the management, i.e. me, couldn't be seen to agree. He was a Protestant, which is quite rare in this part of the world, and used to play on it for all he was worth, because what he really loved was being in a vociferous minority, and knowing that no one would take him on because he had two very sharp arrows in his quiver. These were that he was really quite elderly and that he was a war hero, an honoured member of the French Resistance, and in France the fast dwindling members of the Resistance can get away with just about anything.

At least, he said he was a war hero. There was never anything to prove it - not that anyone doubted it -  until after one rehearsal he took me aside to tell me he would be absent the following week because he was going to Paris to receive la Médaille de la Résistance, a very prestigious military decoration, from the hands of the President himself, who at that time was Jacques Chirac.

It seemed that recognition of his role in the Resistance had taken rather a long time to come his way, in fact more than 50 years. Edmond agreed, but then launched into some rigmarole about his refusal to accept any medals while a certain Colonel was alive. I'm sorry, I'm afraid I didn't enquire deeply enough to be able to give you full details, and the history of the Resistance is such a nasty tangle of betrayal, settling of private accounts, spite and bad faith that I really didn't want to get involved in it. However it turned out that the Colonel in question was now dead, and Edmond's path to his long-awaited medal was clear.

So a fortnight later he turned up with his medal, and its citation, and its ribbons, and the little buttonhole ribbon for everyday wear, and several bottles of champagne, and we didn't get all that much singing done, at least not of the organised, disciplined type I used to try to promote. But everyone seemed proud of having a now recognised war hero in the ranks, everyone shone a little with the lustre of his reflected glory, and any factor that unites a choir is to be welcomed, so I felt very pleased for Edmond.

THEN A month or two ago Patricia (third redshirt in from the left above, a modern languages adviser when she isn't singing) took me aside after the first Thursday rehearsal of this year to tell me that she'd been nominated to receive les palmes académiques.

The academic palms? I had to dust off my memory a bit. There was some mention of them in a very funny and unfortunately almost forgotten play by Marcel Pagnol called Topaze. (Peter Sellers fans may remember him taking a rare but vintage title role in a 1961 film version, which Sellers also directed.)

So I knew just enough about them to know that Patricia was being very highly honoured indeed. Les palmes is an ancient decoration, instituted by Napoleon in 1808 for notable contributions to university education. It's been revised several times since, and now extends to outstanding services to education in general. There's no comparable British institution: it's more specific than the OBE, and less widely distributed. But like the British honours CBE, DBE, OBE, MBE there are grades: Chevalier (Knight), Officier and Commandeur, and Patricia had been awarded the Chevalier grade. Erm, as you were, Chevalière. It's the same as the difference between 'horseman' and 'horsewoman', a masculine and a feminine form.

Patricia arrived at rehearsal a few nights ago hootfoot from the presentation ceremony in Montpellier. The other Jeudistes crowded round, wanting to see the new Chevalière's palmes. Oh, she said, she didn't actually have them yet. In fact, we might not see them for some time, because the palmes weren't actually supplied, you had to buy them yourself. This seemed to me a bit of a swiz or cop-out, as though new Knights of the Garter (maybe a slightly different level of exaltation) were obliged to buy their own garters, or Knights of the Bath - but maybe we won't push this idea too far.

But she did have a certificate, confirming her rank as Chevalière, and signed among others by Vincent Peillon, the current Minister of Education, a rather troubled man who is having no more luck than his many predecessors in reforming the ultra-conservative and left-wing national education system. Patricia had also brought a bottle of champagne, which we very much enjoyed helping her to empty.

As a former teacher I really was quite interested in a national scheme of recognition of professional quality, something which doesn't exist in the UK. When I first knew her about ten years ago, Patricia was a primary school teacher in a nearby town called Bédarieux, where she worked wonders with a succession of difficult classes mostly consisting of children of travellers and North African immigrants.

Then she was hauled out of the classroom - how often this happens to really gifted teachers - to become a modern languages adviser, specialising in English and Spanish. I've been slightly involved with some of her projects, which include an internet-based English-language weather reporting project from schools all over the French-speaking world, from St Pierre et Miquelon in the North Atlantic to New Caledonia in the South Pacific,  and the organisation of English-language 'fun days' in every primary school in the département, which is much the same as the county in the UK. She manages to achieve this kind of thing despite complaining bitterly that most of her time is spent driving from school to school.

We wondered what the French was for somebody who has been honoured with les palmes. After all, 'laureate' exists in both English and French (actually lauréate), for someone honoured in Classical fashion with a wreath of laurel leaves, so why not palmate? It doesn't exist in French, and French isn't a language you invent new words in. Eventually someone suggested palmipède. Hoots of mirth, with Patricia, a great laugher if ever there was one, especially tickled. It means 'web-footed'.

The ribbon and medal of Les palmes académiques

Perfect, she said, the next time she put in an appearance at the département education offices she would wear her scuba diving gear. Plus her flippers. On horseback, of course, as une chevalière.

And it wouldn't surprise me if she really did.

Les Jeudistes are naturally honoured to have a palmipède in our ranks, even though I discover that there's a strict of precedence in these orders: les palmes académiques rank just above l'ordre de mérite agricole (Order of Agricultural Merit), but - oh, Napoleon! - just below la Médaille de la Resistance. So old Edmond wouldn't have had his nose put out of joint.

But that purple: I mean, it's very fine, and a rich rich colour, but you think it really goes with Les Jeudistes' pillar-box red? H'mmm...