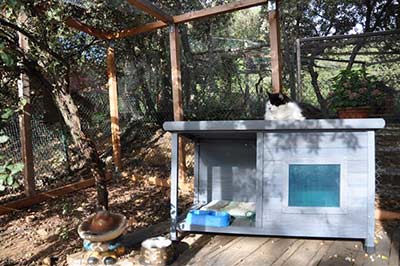 WE HAD to return to Scotland for a funeral recently. Our first thought, whenever we go away, is what to do with Pinot the cat. Luckily we've established very good relations with Christine, who runs an excellent kennels and cattery on the edge of a tiny village not far away.

This village - more a hamlet, really - is called Lugné. Not easy for Anglo-Saxons to pronounce: it comes out something like 'lee-nyay'. (Maybe to solve this problem, my children - although both have good French - display the family inability to leave a perfectly good name alone, and call the place 'Lunge'. Much easier.) Summoned to don the black tie, dark suit and sober mien, and to brush up our waning acquaintance with Abide with me and The day thou gavest, Lord, has ended, we approached Christine to see if she had room to squeeze Pinot in somewhere while we headed north. By car, because there would be a lot of stuff to bring back.

Her kennels-cum-cattery is like the Club Med for pets. (You can find it at www.pensioncanine4os.com/ but it's all in French.)
It's a place where we feel entirely comfortable about leaving Pinot. He has his own run, with Mediterranean oak trees to climb and shade, a little hut with a south-facing stoep or verandah, a comfortable roof and an inner sanctum, earth and leaf litter to dig in, and every comfort an elderly feline gentleman could want. On cold winter nights, he gets taken into one of the summer gites Christine lets out. He has neighbours both canine and feline to spy on and feel superior too. What more could a cat want?

On the agreed day we went to Christine's place. It's called Les 4 Os, The 4 Bones. As usual we were greeted by a busy-drawers Scottish terrier - she breeds them - a friendly goat and a magnificent horse. No, they're not paying guests, they live there all the time. The place seemed full. We mentioned this Christine. Yes, she said, she had some long-term clients, whose owners had gone for months to Brazil or the Seychelles. Or maybe they'd gone to Scotland: did we know that a new route had started, from Béziers (about an hour from us) to Edinburgh?

Yes, we did know, and we're aware that the local lifeline for so many Brit expats is the growing spread of budget airline destinations. Indeed, we'd been invited to the inauguration of the new twice-weekly service from Béziers to Edinburgh. Not to the flight itself, one by the airline whose name says the same backwards as forwards, but to the fact that it had been set in place. We hadn't gone, and had missed out on a free cup of coffee in the airport lounge and a free pen. H'm.

I can't remember how we got from chatting about the new flight to the new James Bond film Skyfall. It was suggested that some of Christine's customers had maybe taken the new flight to Scotland to find for themselves the Scottish mansion that features in Skyfall, particularly towards the end. Christine said would love to see that house. It struck a special chord with her. For her it expressed the true spirit of Scotland. Had we seen Skyfall? Maybe we would see this extraordinary house as we drove up through the Highlands. We were sorry, we said, we hadn't seen Skyfall, so we probably wouldn't recognise it anyway. She promised to lend us the DVD when we got back.

And so she did, very kindly, and we spread watching this Enid Blyton for big kids over two evenings, with Pinot asleep in an armchair beside us and no doubt dreaming of his Club Med appartment. The end of Skyfall reminded us of the famous ambiguous Scottish newspaper headline PEER'S SEAT BURNS ALL NIGHT: ANCIENT PILE DESTROYED, but apart from that the Bond ancestral home wasn't remotely like any house I'd ever seen in Scotland, despite having lived and worked and travelled there for the best part of 30 years, before I came to live in France. When we told Christine, having consulted the invaluable IMDb website, that in fact the house was a mock-up made in Elstead, in Surrey, I think she was genuinely disappointed. But we all live in the Club Med of our illusions, don't we? Maybe we shouldn't have told her.

THE OTHER day Monsieur Noguès le ramoneur (the sweep) came. By arrangement: we have the chimney swept when we've stopped having fires at the end of every winter. We haven't had M. Noguès before. Noguès isn't a common name round here, and I wondered if it was originally Spanish, and if so maybe his first name was Ramon. 'Ramon le ramoneur' had happy echoes of Bob the Builder or even Shaun the Sheep. But no: it turned out his first name was Alexandre. Not knowing how clean or messy he might be, we carted all the sitting-room furniture down to the far end of the room and covered it with dust-sheets.

Especially for this column, knowing that my noble band of readers is athirst for details of even the slightest French domestic circumstance, I climbed out on to the roof with the camera to capture for you the magic moment when the sweep's brush protrudes from the chimney stack. I mean, let's face it, have you ever read anything anywhere about the life and times of French chimney sweeps? No, I thought not.

I stood near the chimney, feet firmly placed on the tiles either side of the roof ridge, waiting for M. Noguès' brush to appear. I waited, and waited, and waited until presently there was a rattling against a nearby gutter, and M. Noguès' head appeared, not out of the chimney, but at the top of a ladder. He'd come up on to the roof to join me, complete with brush and bundle of rods.

He started by lifting off the very heavy concrete cap on the chimney, which is designed to prevent rain getting on while not obstructing smoke from getting out. He scraped all round the chimney top with a large plaster knife, pushing his sooty and tarry scrapings down the flue. He then took his brush, a traditional round bristly one, screwed it to the first of his rods, and proceeded to thrust it firmly down the chimney, working from the top down instead of the other way round. So I was baulked of my photo.

No photo, and no dust either. All the soot was contained in the closed fireplace. All M. Noguès had to do was to hoover it up. And do the paperwork.

The fire cover in French household insurance policies is only effective if the claimant can produce a valid certificate showing that chimneys have been swept within the previous 12 months by an accredited sweep. I don't expect I helped M. Noguès' concentration, while he was making out his certificate, by telling him that in rural Scotland people clean chimneys either by tying heather roots round a jagged stone, climbing up on to the roof and jiggling it down the chimney on the end of a rope. In other cases, especially where peat is burned, it has been known to drop a live hen down the chimney.

M. Noguès, who turned out to be quite a wag, thought this was very funny. But it would never have worked in Skyfall, would it?