Christopher Campbell-Howes is kept in the dark . . . 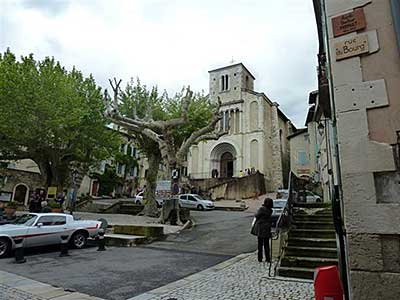 I EXPECT you've come across those competitions in magazines and newspapers that invite you identify some place in a photo? They're entitled 'Where is this?' or 'Where am I?' and they give you various clues. If yours is the correct answer drawn out of the hat you win a free weekend at somebody's bed and breakfast, or maybe some luggage to take your stuff there.

If you recognise the photo above, I'm afraid all you win is an extra helping of self-esteem. There isn't too much you can say about it, really. There's a square, with a romanesque-style church at the top end, some mulberry trees, an extraordinary American car, a street that appears to have two different names, a red fire hydrant and one or two people about on a dullish morning. Might be anywhere in the south of France, really. Give up? I should.

Take the Rhône corridor and the autoroute A6, southwards from Lyons, or northwards from Marseilles, and when you get to Montélimar, where the nougat comes from, turn eastwards into the valley of the river Jabron. You come to a string of villages with bizarre names, even for France: La Bâtie-Rolland, La Bégude de Mazenc, Le Poët-Laval, and the river begins to lose itself in the hills at an end-of-the-line place called Dieulefit, which means 'God made it', a modestly pretentious name, you have to agree. And that's the square at Godmadeit in the photo.

I don't expect we would ever have heard of it either if Godmadeit hadn't boasted an annual Whitsun festival of contemporary music, a beano called Musiques d'un Siècle, music(s) of the past century. The organisers treat this strictly, i.e. anything written between 1913 and 2013 is fair game. Their constitution also demands that at least one living composer should be present.

When I'm not writing Campbell's Diary or building drystone walls or conducting choirs or lolling about in the sun letting the grass grow under my lounger and wishing somebody else would cut it, I'm sometimes drawn to the piano and the music paper, pencil and eraser (I get through a lot of erasers) and - dare I say it? - the computer, to bully a few rebellious crochets and quavers into making musical sense, and I tell you this merely as a warm-up for the news that this year I was selected to be one of the living composers present. A huge honour, because the Dieulefit (I'd better stop calling it 'Godmadeit' now and touch my forelock instead) Musiques d'un Siècle is as prestigious in its way as the Hay Festival of books etc. is in the UK, and I appear to be the only Brit composer ever to feature in its guest list. Wow.

SO JOSEPHINE and I took ourselves to Dieulefit for the Whitsun weekend in the pouring rain that has continually soaked most of France this spring, settled into a bed and breakfast in a kind of mediaeval tower built into a steep hillside, and went off to find something to eat before the Saturday night concert. We ended up in a brasserie (always open, cheap and cheerful) where the noise was shattering: no, not musique d'un siècle, but the French rugby final, Clermont-Ferrand v. Toulon, on the various TV screens round the bar and dining area. No one shouts more raucously nor sings more out of tune than a French rugby fan. Most of the brasserie punters seemed to be Toulon supporters: in the end Toulon won by one point, thanks to Jonny Wilkinson's place-kicking, and great - and deafening - was the rejoicing.

Our ears were further rinsed by the concert that evening, held in an ancient church up in the old village, behind the church in the photo. It was almost entirely given to cellos in a mixed programme (nothing of mine) that occasionally had me longing for the good old tunes of Webern or Stockhausen. The church was full, an audience made up, it seemed to me, of retired university professors, and I rather dreaded what they might make of my music the following night. After the concert we staggered up the irregular steps for an early-ish night in our tower boudoir where, if Josephine's hair had been longer, she might have been mistaken for Rappunzel.

MUSIQUES D'UN Siècle wasn't the only thing going on in Dieulefit that weekend. When we got out and about on Whitsunday morning the place was seething, people, kids, dogs and especially cars trying to find somewhere to park. The occasion was the Marché des Potiers, Potters' Market, and potters and ceramicists from all over this extreme northern area of Provence had gathered to display their creations. Here are a few:

I can't make up my mind whether I'd like one of these in our garden. I suppose if people have statues of nymphs - so much more appealing than gnomes - in their herbaceous borders, there's no reason why you shouldn't have seats featuring mermaids, and let us not forget her merkitten, up the garden path. Ever with her feet more firmly on the ground, Josephine bought a mug. Should I have bought the mermaid? Or do mugs and mermaids make a fine pair?

That evening the retired university professors were out again in force, and there was standing room only in the church. My piece - a sort of musical description of our village - was on first. The three Paris-based musicians, Saskia (violin), Eric (cello) and Jérôme (piano), who call themselves the Hoboken Trio, played impeccably. No composer could have had finer interpreters. At the end there was a standing ovation, and of all the many high points and highlights of almost 22 years'-worth of living in France this was the greatest. I felt like fellow-Brit Jonny Wilkinson must have done when his final conversion sailed between the uprights on wings of glory, his club Toulon won the cup, the punters in the brasserie down the road (and in most of the south of France) went delirious.

BUT NEMESIS, of a kind, soon struck. It always does, one way or another. We climbed up to chez Rappunzel late that night to find that Madame our hostess had turned the bed down, had put some fresh irises on the dressing table and some pieces of nougat on the mantelpiece. We slept quite well, and in due course I woke up to find it still dark, although dawn breaks here at about 6am. I dropped off again, dozily grateful for two or three hours at least before our 9am breakfast appointment.

At what seemed hours later I woke again. It was still pitch dark. Rappunzel hadn't moved. I peered short-sightedly at my watch. Twenty to ten! Unbelieving, I assumed my watch had stopped: but no, the second hand was moving.

What had happened? There was an obvious reason: Madame, in preparing our room, had closed the shutters, excluding the light of day. Simple Brits that we are, clinging instinctively to Blighty habits, we never close our shutters at home. I expect Jonny Wilkinson has the same problem.

And, in case you're wondering, Madame was kindness itself. When we surfaced at shortly after 10, she'd kept breakfast for us. On the table were no less than 14 different flavours of honey. I'm afraid we didn't have time to sample them all.