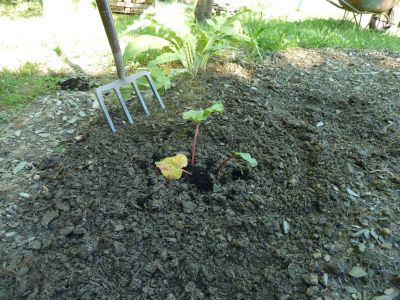 IT MAY all be a dismal failure, but at least no one can say I haven't tried. Even after nearly 22 years of living in the Deep South of France there are Brit things I still cling to. Like rhubarb crumble, mmmm. Le crumble exists as a term in France, but it's nothing like the rich, crisp and oaty topping, melding and melting into that delectably doughy mix where it meets and mingles with the lightly sweetened stewed rhubarb beneath, a marriage made in heaven. And for me, at any rate, custard completes this gorgeous ménage à trois. But beware! Custard in France masquerades as crème anglaise, English cream (as if!) but don't be deceived by this unconvincing alias: crème anglaise is gruel-thin, over-sweet, generally miserable and - crime of crimes - served cold. Gadz! as the kids I used to teach in NE Scotland would say when faced with anything particularly unpalatable.

Finding rhubarb in the south of France is about as likely as finding a £10 note in the pocket of a coat you haven't worn for ages: an agreeable surprise, not impossible but pretty infrequent. I've never seen it in the street markets in this part of the world, only in the big chain supermarkets like Auchan or E. Leclerc. (Did you know there actually is a Monsieur E. Leclerc? The E stands for Edouard. He's very much alive and kicking. I don't know if he likes rhubarb, though.)

Josephine did come across some rhubarb the other day, a rather forlorn and lonely-looking bundle from Belgium looking for an owner in the fruit and veg of our local Intermarché. So into the trolley it went, trailing dreams of rhubarb crumble behind it. (The trolley is lechariot or - more commonly - lecaddy here. Both masculine nouns, you note, maybe in a gender-bonding effort with the rather forlorn and lonely-looking men pushing them glumly in the wake of their womenfolk.)

WE WENT along the road to the local nurserymen a week or two ago, look for an arbutus or strawberry tree, something by which to remember my mother, who died recently aged 102. We found what we wanted, and among the potted vegetables and herbs we also discovered a solitary infant rhubarb plant, the one in the photo up there, with stems all of 10cm high. The thought occurred to me: if rhubarb is so seldom seen in the shops, why not grow some? So about €4 changed hands, with some misgivings, because I suspect that rhubarb just won't flourish here. It's too warm, it's bound to wilt and die in spite of all the TLC I shall lavish on it, all the more T and L with mouth-watering thoughts of rhubarb crumble behind it. Especially for you I'll have a monthly rhubarb watch and you can see how things progress. But I'm not hopeful...

THIS CHAP turned up the other day, by arrangement. He's inserting a long blue hose into a hole in the ground. The hose reaches down from the hole to his truck, parked in our lane. Yes, you've guessed: he's come to empty our septic tank.

I wouldn't like to think of visitors to Campbell's Diary being deprived of any aspect of life in the south of France, however lowly, so maybe it's high time I filled you in with details of our septic tank. There's no mains drainage here, and it's easy to see why: the area, which contains about 15 households plus the local old peoples' home, is so up-and-down that it would need all kinds of costly pumps and pipework and holding tanks to keep the flow going. Each household is responsible for its own sewage disposal, and although the older housing stock may have fairly rudimentary arrangements, the regulations governing new builds are strict.

So when we built this house coming up for ten years ago we had to have a septic tank installed. Josephine took hundreds of photos of every stage of the house being built, and missed nothing -

- except the glorious moment when the chap in the pink and blue shorts actually got inside the septic tank, after Eric the digger driver had lowered it into its hole, to connect up some of the pipework. Occasionally he popped his shaven head out of the inspection hatch, as though he was the commander of a midget submarine. A little very welcome light relief in the tense and fraught business of building your own house.

Septic tanks are fertile grounds for the spawning of legends, especially when it comes to emptying them. Ours needs emptying about every five years, hence the chap with the blue hose. It's what you find in them that gives them their legendary lustre, hinting at unguessed-at crises and private tragedies: I've known - but not from this house - handfuls of loose change, pairs of tights, a small silver cup, what looked like a pork chop, a tobacco pipe, some Lego policemen and an at first unidentifiable object that turned out to be un nounours, a teddy bear. How sad.

Nothing like that to report here, though. The chief beneficiary of our septic tank, in particular the soakaway, is our magnificent Paulownia tree, one given to us as an insignificant sapling by our friend and neighbour Hector a mere five years ago. Clearly it flutters its leaves in gratitude every time we flush the loo.

IT'S BECOME a tradition, whenever a birthday or other special event come round, for members of my small choir Les Jeudistes to lay on some kind of after-rehearsal beano, usually a cake with muscat (a sweet fortified dessert wine) or sometimes champagne. The other day it was Yves' turn. Yves has recently joined the bass section.

A week or so before this celebration Yves had nobly volunteered to collect a cellist from the station in Béziers, a town about an hour from here, and to bring him back to our part of the world for a concert. They'd never met, so to aid recognition (yes, I know, cellists are instantly recognisable by their cello cases, but what if the train had been full of cellists?) I emailed him the only photo I had of the said cellist. This was a group photo of Les Jeudistes plus a small string orchestra, including our cellist, from a year ago.

So after rehearsal the other evening Yves produced this magnificent cake:

He'd taken the photo (cellist in the back row, third from the left, your correspondent head and shoulders below the rest) along to his local patissier, who'd managed to print it on to some edible surface, rose-petal paper, marzipan, white-chocolate-and-rice paper, I've no idea what. Or how. It was very good. Moreover, he said the patissier had had it in his (refrigerated) window for several days, thus giving us and a forthcoming concert some most unusual and very welcome publicity.

Now I'm going to have a look at our rhubarb. Mmm. Perhaps I should have planted it beside the septic tank soakaway . . .