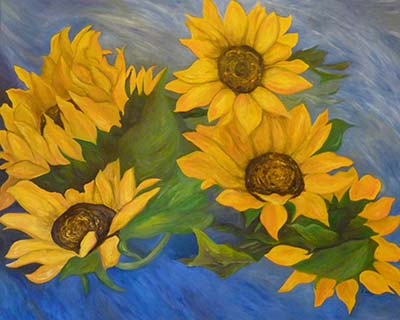 RECOGNISE the artist? One of the Impressionists? Cézanne? Monet, out
of his garden at Giverny? Mmm, could be. Van Gogh? He painted sunflowers, didn't
he? And yet...

...you're quite right to hesitate. It isn't any of these. Pull up your chair
and I'll tell you.

Last October Diane (in full flow below), one of the two sopranos in my little
choir Les Jeudistes, gave a solo recital in the village, and I accompanied
her on the piano. We worked hard for this, practising on and off for several
months before the concert.

Then the Thursday night, choir rehearsal night, after the recital, Diane
turned up a minute or two late, wrestling with a large package wrapped in brown
paper. After rehearsal, and indeed after several Jeudistes had gone home whistling
(always a sign of a good rehearsal), Diane told me the package was a present
for me, to say thank you for all the work that had gone into accompanying her.
You see above what was revealed when the wrapping paper was removed. Just beneath
the most south-westerly sunflower petal there's a tiny signature, DW11. Diane's
surname is Werneburg. She'd painted it herself, in 2011. She said it was her
first ever canvas. I was honoured.

It was quite large, about 100 centimetres by 80, roughly three feet by two-and-a-half.
An impressive canvas, redolent of summer and cloudless Mediterranean skies;
those massive sunflower heads in haphazard arrangement, each an exuberant distillation
of golden summer suns. I liked it very much.

But immediately there was a problem. Where would we hang it? Our ceilings
are fairly low: Diane's sunflowers needed a high ceiling to show to advantage.
We have quite a large collection of paintings, all in a very different styles
from Diane's. What should we do? We could hardly leave it to gather dust in
the garage or loft. Consign it to a spare bedroom? Every time Diane came into
the house she would be wondering what we'd done with it. Clearly it had to
be on general view. H'm. Awkward.

So Josephine and I discussed and discussed the matter. We toyed for while
with the notion of attaching it to the bedroom ceiling, but we discarded it
for Josephine's brilliant idea of not hanging it indoors at all, but outside,
on one of our covered terraces where there was a large empty space between
two French windows. Brilliant. And as the dominant colours of the outside of
our house are a sort of Provençal blue (for the painterwork) and a shade
of pale ochre called Havana (for the render or harl), Diane's colours would
marry very well.

But wouldn't it be terribly exposed to the sun? And sometimes, when those
vicious storms we sometimes get lash and hurl their rain horizontally beneath
the terrace roof, wouldn't it get wet? I took the canvas to Aude Ficini, our
tame picture restorer in Montpellier, the big city, and explained the situation
to her. The lovely Aude has had lots of paintings from us to clean, restore
and touch up: Diane's sunflowers ought to be a doddle.

And so it was. She applied special ultra-violet varnishes and anti-humidity
coatings back and front. We had a slender frame fitted. It passed the winter
and spring wrapped up underneath the stairs, awaiting a suitable opportunity
to hang it. And for someone suitable to unveil it.

TRADITIONALLY WE finish our choir year with a barbecue, and hardly had the
final chords of our year's work, Haydn's 'The Seasons', died away into the
previous week than 11 Jeudistes and assorted spouses, offspring and friends
assembled in festive mood around a bottle or three of champagne. The previous
evening I had at last (you know how it is) managed to attach Diane's sunflowers
to the wall with a cunning system of hidden brackets, and that very afternoon
I'd found a tablecloth my daughter brought us back from Zimbabwe some years
ago, just large enough for the elephants to hide the sunflowers. Here they
are -

- and here is Linda, Diane's 4-year-old daughter about to perform the unveiling
ceremony.

And here are Diane's Sunflowers in their evening glory, with assorted Jeudiste
silhouettes. Thank you, Diane. A wonderful present. I'll accompany you any
time.

AN UNEXPECTED guest at the unveiling was Saïd, an Algerian industrialist
staying with an old friend, one of the Jeudiste spouses. Goodness knows what
he made of it all. Three days before he'd bought a sandwich on the train from
Perpignan, almost in Spain, to Montpellier. He opened his sandwich pack and
asked the buffet attendant what he should do with the wrapping. The attendant
indicated a bin with a spring-loaded lid. Saïd pushed it open with his
free hand - the other was holding the sandwich - and pushed the wrapping inside.
The lid closed with a snap and took the end of his index finger off.

Shock, horror, blood everywhere. The train captain (yes, they have such things
in France) asked over the train PA system if there was a doctor on board. There
was. He hurried to the buffet, dealt professionally with the bleeding and rescued
the missing finger-tip from the bin, which he sterilised and wrapped suitably.
By a strange coincidence he knew Saïd's native town and was able to speak
to him in his own dialect. By another coincidence the doctor also knew the
duty surgeon at Lapeyronie Hospital in Montpellier, whom he rang then and there
and arranged for him to treat Saïd on arrival. He also arranged for an
ambulance to be waiting for Saïd at Montpellier Station.

On arrival Saïd and his finger-tip were whisked to hospital, where the
surgeon was waiting for him. A few shots of anaesthetic, needle and thread,
and hey presto! - the finger-tip was sewn back on again.

Saïd stayed a day or two in hospital, and was discharged the afternoon
of the Jeudiste beano, which is how he came to be with us. He told me that
after the operation a slight haematoma appeared in the region of the stitches,
slowing the rate of recovery. It had to be removed. How did they do it? Avec
des sangsues, he told me. With leeches. I thought he was joking, but no,
it was true. It's a recognised practice, apparently.

THE SUNFLOWERS now look as if they've been there forever. The other day I
was sitting beneath them when I was conscious of a loud buzzing above my head.
Several bees, probably our neighbour Hector's, were trying vainly to find any
nectar among the flower heads. No doubt in autumn we shall have small birds
trying to peck at what they think are seeds. And if Saïd's leeches had
a go at them I suppose they too would just be shown to be suckers.