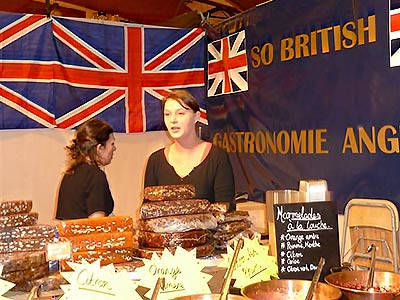 THE FIRST thing I said when I approached this stall, no doubt drawn irresistibly to it by a sudden wave of patriotism induced by the Union Jacks, was (in French) "I imagine you speak English?"

"Ah, non, pas du tout, Monsieur," (Ah, no, not at all, Monsieur) came the answer, very decidedly, as though speaking English would make her hair catch fire. H'm. This seemed bizarre to me, a stall calling itself So British and proclaiming itself to be an outlet for good British things to eat. Admittedly, there was plenty of cheeses, Cheddars of all kinds including one soaked in Guinness, Stilton and farmhouse Shropshire. But what do you make of those 'marmelades' as advertised on the little blackboard? Marmelades à la louche, it says, meaning you could ladle it from the bowl into the little plastic container they gave you. There'a a list of flavours: Orange amère (bitter orange, fair enough for marmalade), Pomme, menthe (apple, mint, erm...not sure about this), Citron (lemon, don't mind if I do), Cerise (cherry, but how would this differ from jam?) and Citron vert, rhubarbe (lime and rhubarb, no thank you, certainly not at breakfast).

Then there were all those slabs of some sort of cake. They were advertised as pâtes de fruit, which translate as fruit cheese. The basis seemed to be a stiff fruit paste, like membrillo, with nuts added. If this is supposedly typical Brit goodie, it's a rather old-fashioned one. I lived in various parts of the UK for nearly 50 years before moving to France, and I expect it was living a blameless and sheltered life that prevented this confection from ever coming my way. In the event we didn't buy anything from these monoglot French ladies. As for Cheddar cheese, we were on our way back from Cornwall with enough of the stuff to last until next Easter, at least.

Where was all this, and what were we doing there? Some years ago now, Indispensable William, our friend and neighbour for whom I'm always happy to hold open the door of this column, suggested that if ever we wanted good champagne at reasonable prices, the person to go was Chantal Lallement. Mme Lallement ( www.champagne-chantal-lallement.com ) has several acres of Pinot Meunier, Pinot noir and Chardonnay vineyards in the Champagne area, well to the east of Paris. She's a small private producer of good champagne, in no way connected with the great champagne houses, and her prices are more than reasonable. We're on her mailing list. Her latest newsletter told us that at the beginning of November she would be exhibiting at the Salon des Vins et de la Gastronomie at Rennes, in Normandy.

On reading this Josephine and I looked at each other with a wild surmise. Why, on November 2nd we would be driving through Rennes, on our way home from a few days in Cornwall. Brittany Ferries would pitch us into the pre-dawn murk at Roscoff: we could be in Rennes by 10.30 at least. We told Mme Lallement, and she kindly sent us tickets.

THE SALON des Vins et de la Gastronomie really took us by surprise. It was a vast affair, a wine and food trade fair, open to the public, with the best part of 400 exhibitors, a startling witness to the French devotion to good things to eat and good wines to go with them. And the stunning variety of them. It was held in a huge hangar, a temporary cathedral of French gastronomy, on the periphery of Rennes airport. It was packed. Hardly in the door, I was instantly seduced (Josephine doesn't share my sweet tooth) by a man selling nougat. Not the tooth-cracking stuff you get so often from Montélimar, but a soft crumbly white paste with glacé strawberries mixed in. Mmm. I don't know where it came from, but I know where it ended up . . .

Where else did we go? Are you ready? Well, there were wines from Alsace (14), the Auvergne (1), Beaujolais (10), Bordeaux (109), Burgundy (27), Champagne (15, including Mme Lallement), Charentes (7), Languedoc-Roussillon (14, including some producers from St Chinian, just down the road from where we live), the South-west (19), the Loire valley (29), the Rhône valley (16), and - brave fellows, given the French wine producers' fairly savage protectionism - 5 from Italy, Switzerland, South Africa, Spain and Portugal. You could have stopped for a tasting at every single one of these stalls, 251 snifters, and a fine old state you'd have been in.

Every stall was equipped with a sack trolley, not to wheel out the legless and hyper-sniftered but to convey customers' wine cases out to the car park. There was a constant to-ing and fro-ing of sack trolleys - and indeed we added to the traffic, wheeling our modest purchase of champagne from Mme Lallement's stall out to the car, and somehow finding room for it in a boot (or trunk, if you're reading this in the USA, and I hope you are) full of Brit goodies bought the day before in Waitbury's, Tesda's, Asrose's and Sainsco's (there, that's muddled them up) in Falmouth and Truro. You know, imports like Marmite, porridge oats, Cadbury's Fruit and Nut, mincemeat, Lapsang Souchong, Christmas crackers. (Oh, and marzipan for Indispensable William and dried yeast for our neighbour M. Hector. Yes, we do commissions.) I know, if we choose to live in France we ought to go native and not rely on comfort stuff like this. But . . .well, I for one can't throw off my birthright just like that, certainly not the chocolate. The truth is that everything I ever write or compose is fuelled by the timely square of F&N.

Here's our nougat man. He calls his stall 'PM' - you can see it on the little shield - which stands for Péché mignon, 'secret sin', 'amiable weakness' or 'pet vice'. We bought a goodly slice, and took a photo of M. Nougat cutting it for us. Do you know, there are still a few crumbs left in the fridge? I just might indulge my amiable weakness when I've finished this article . . .

Have I left the best till last? This wouldn't be Campbell's Diary, this wouldn't be Josephine's and my occasional adventures, this wouldn't be my often too skittish and quirky view of things, this wouldn't be la belle France distilled, crystallised into Le Salon des Vins et de la Gastronomie, without a final glance. Here they are, an unruly crowd, unpredictable, individualistic, all going in different directions, a generally fine and well set-up race that you can really take to, once you've made the initial plunge . . .

Happy Christmas, joyeux Noël, to readers regular, accidental, occasional and new. Thank you for your loyalty and support. It has been fun.

It is with regret that we have to say that this is Christopher's last column for us as he has decided to hang up his blogging pen. We wish him well and hope that he continues to enjoy life in France to the full. The many blog posts he has done in the past will remain on line.