How to play the number one game in France | Boules 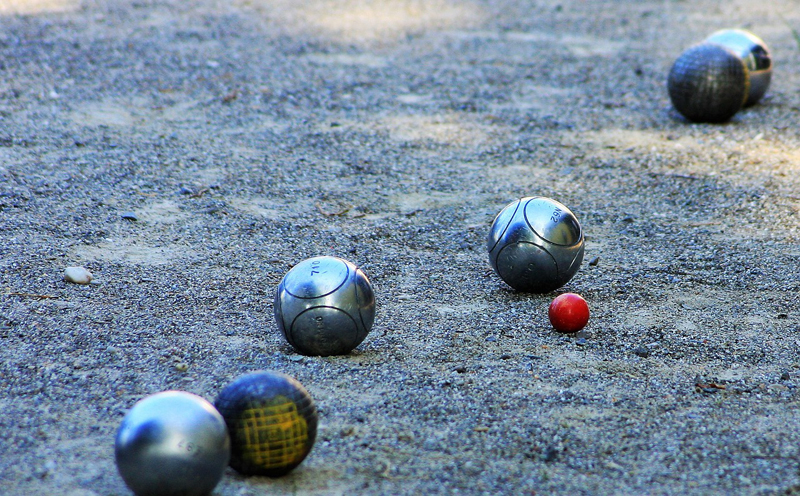 When you’re on holiday in France, the chances are you’ll either be invited to play boules or you’ll find a pitch to play on. It’s a great way to make friends, have fun and get under the skin of real France. The game is also called pétanque, which means “feet fixed”, boules is easier to say.

The rules of Boules – it’s not just a game

Pétanque, or boules, is a serious affair in France. Pretty much every town and village has a boules pitch and every French person plays boules – well maybe not every single one, but it is the most popular game in France with an estimated 20 million people playing it regularly.

The point of the game is to get your boules, heavy balls that are often silver coloured, closest to a marker called a cochonnet, which means piglet. The game takes place on a flat, level surface.

Officially you should have no more than three players per team. In reality, unless you’re playing at a serious level, you pretty much turn up for a game and space is made however many people are playing.

Officially players toss their boules from a circle 50cm in diameter. Normally, someone marks a line in the sand or gravel with their foot – you all stand behind it. And you’re supposed to keep both feet on the ground when you toss your ball, not all dramatic like ten pin bowling with one foot behind.

The cochonnet, often made of wood or coloured red so you can see it easily, is to be thrown between 4-8 metres from the marker. If a cochonnet can’t be found, a distinctive stone will do. Then players must throw their balls to see who can get closest to it.

When all the balls are silver, you can tell whose who’s by the markings etched into the metal (or by the rust).

It sounds simple and it is - but there are some twists. Getting the ball close to the cochonnet is as much luck, for most of us, as skill. You need to move balls that are closer than yours to the cochonnet by throwing your next ball and knocking their ball further away.

Someone usually produces a ruler or piece of string to measure the distances.

There’s a lot of laughing, quite often cheating, there’s none of this let the holiday makers win malarkey.

Don’t try and be nice and let your French friends win, go all out for victory – it will be appreciated!

One final piece of advice, it’s not mandatory, but a glass of wine or Pastis is de rigeur when playing.