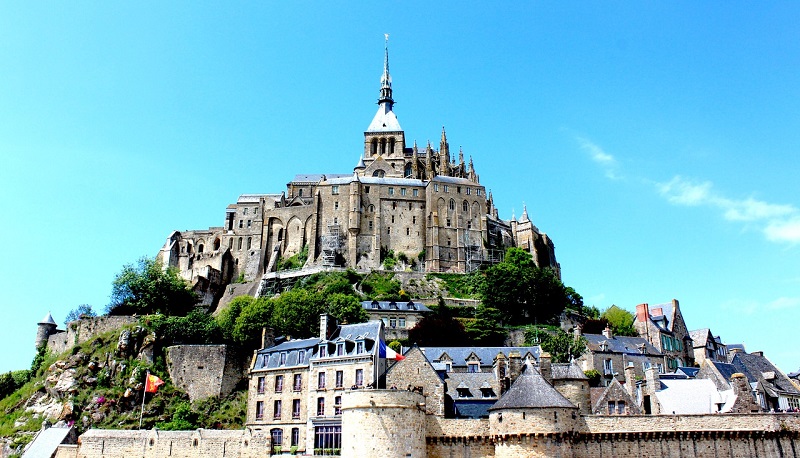 La Manche is a department in Normandy. It’s blessed with a long coast line and picturesque countryside. There are many museums and sites and it is one of the key areas for the D-Day landings of 6 June 1944.

We share some of our favourite things to do and see in La Manche:

The no. 1 must-see in Normandy, in fact it’s a top site in France, is the Benedictine Abbey of Mont-Saint-Michel. It is one of the most incredible medieval feats of architecture in the world. From the 8th to the 18th century it was one of Christianity's most important pilgrimage sites. Now it’s one of the most important tourist sites. The Abbey consists of several stunning clerical buildings including a church, cloisters, refectory, monks' ambulatory and the gardens of what is known as the Merveille (marvel). It’s a steep walk to the top but worth it for the amazing views and buildings. Lower down is a charming helter skelter of wiggly winding streets lined with cafés, restaurants and shops.

The Airborne Museum is based in the square of Sainte-Mere-Eglise, just a few miles from the D-Day landing beaches. Through spectacular museography, the Airborne Museum takes you through D-Day alongside American paratroopers of the 82nd and 101st Airborne Divisions.

Barfleur – one of the most beautiful villages in France

Barfleur with its pretty and colourful port is officially one of the prettiest villages in France.

Climb one of the highest lighthouses in Europe

Situated two kilometres to the North of Barfleur, the lighthouse of Gatteville – 75 metres high – is the 2nd tallest in France and Europe. Walk up the 365 steps and enjoy a magnificent panorama.

The Jardin des plantes de Coutances is the oldest public plant garden in Normandy and the plant theme changes annually. Recent displays have been of food and sea life. It’s a great park for relaxing and a picnic.

Take a cruise on a passenger boat, yacht or old sailing ship. You can go island hopping to the Chausey Islands, the Channel Islands or Tatihou Island and other smaller, lesser known islands off the coast of La Manche.

The great gothic cathedral of Coutances was constructed from 1210 to 1274. Standing 80 metres tall, it dominates the town and can be seen from miles around.

Utah Beach stretches from Sainte-Marie-du-Mont as far as Quinéville, about 5 km. It was the first of two zones selected for the American landings. Visit the Utah Beach Museum to discover more about the history of the D-Day landings.

Close by you can visit the German battery at Azeville which marked the beginning of the presence of the Germans on this stretch of the coast.

3 towns to visit in La Manche

Cherbourg is at the tip of the Cotentin Peninsula, the last stop before the high seas. There’s plenty to do and see here, from museums to fabulous sea food restaurants. Don’t miss La Cité de la Mer, a scientific theme park located in the old transatlantic harbour station of Cherbourg where you can see the submarine “le Redoutable”, take a virtual tour to the bottom of the ocean and discover sea life in the aquarium.

Granville, known as the "Monaco of the North", became a popular seaside resort at the end of the 19th Century. It’s an elegant city, great for a stroll, seafood restaurants and lovely beaches. Don’t miss the Christian Dior Museum. The couturier Christian Dior spent his childhood here and each year his former family home, now a museum, hosts an exhibition dedicated to the stylist.

Saint-Lô is home to the State Stud Farm, constructed under Napoleon. Visit to find out more about the horsey history of this area. The Musée des Beaux Arts is well worth a visit with paintings by some of the greats, including Boudin. Don’t miss the Norman Bocage Museum at a 17th century farm with a huge collection of traditional artefacts which depicts farm life in Normandy over the centuries.

Discover lots more to see and do in La Manche on the tourist office website: www.manche-tourism.com