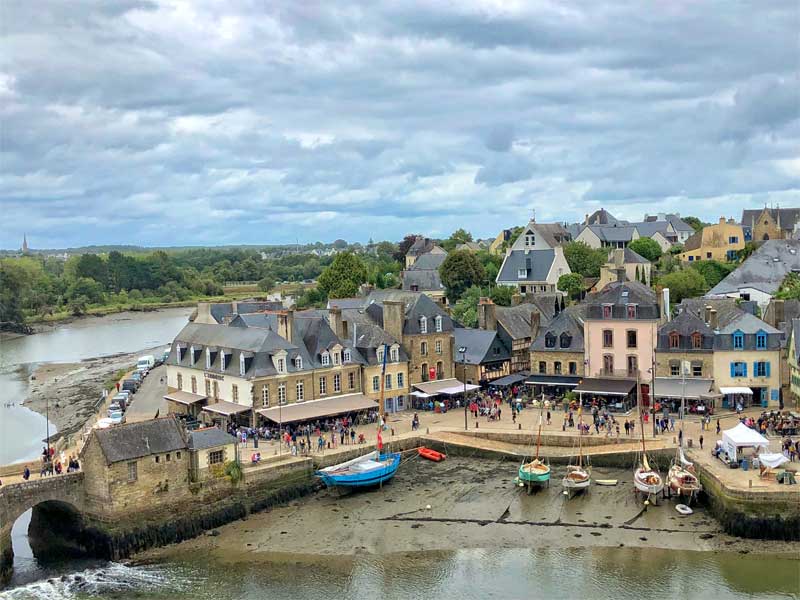 Morbihan in southern Brittany has a beautiful coastline as well as the Gulf du Morbihan, an inner sea. Beautiful countryside, historic towns and a sunny climate make this a holiday paradise.

Here are some of our favourite things to do…

Pretty as a postcard: Port of St Goustan, Auray

Visitors often miss the 15th century port of St Goustan on their way to see the famous stones of nearby Carnac, but it’s well worth a stop. You’ll find a perfectly preserved 600 year old harbour that is today full of restaurants and cafés including one with a plaque commemorating a famous visitor. Benjamin Franklin landed here in December 1776 for secret meetings with the King of France. Franklin took the road to Paris to ask France for help in the American War of Independence and one of the quays is now named after him. From June to September take a boat ride from here around the little islands in the Gulf of Morbihan. Don’t miss exploring the town, cross the narrow 13th century stone bridge, which links the two banks of the Loc’h and then make your way up Les Rampes du Loc’h. This specially built walkway leads up the hill to the site where the château once stood and from where you’ll have an amazing view.

You can’t fail to be impressed by the Alignements du Ménec – lines of stones, 1km long, 100 metres wide, as well as the Alignements de Kermario, more than 1km long. These mysterious stones have baffled historians for centuries. There are more than 4000 of them, some weighing up to 350 tons. Burial chambers, giant observatories marking the stars, gravestones? No one is absolutely sure but it’s thought they were erected around the same time as Stonehenge. Nearby the beach of Carnac is a great place to contemplate the meaning of the stones!

The region takes its name from the words: Mor-Bihan, which means "little sea" in the Breton language. The natural harbour of the Gulf of Morbihan is the most famous feature of the coastline and is classified as one of the "Club of The Most Beautiful Bays in the World". Apart from its good looks it’s also great for nautical jaunts. And if that’s not enough, there are, apparently, 365 islands off the coast, perfect for explorers!

This old town of Vannes is a place of winding cobbled streets, full of history, character, colour and beautiful medieval architecture. Head to the Place Henri IV in the centre, lined with half-timbered houses, and discover its authentic cafés, restaurants and quaint little shops selling local produce and gifts. There are two museums, plenty going on year round, including a summer Jazz Festival and there’s even a beach – the Conleau Peninsula. Vannes is a great base for visiting the gulf of Morbihan.

Josselin in the interior of Morbihan is famous for its medieval castle with a doll museum, a beautiful old town for enjoying walks, stopping to eat a pancake or a bowl of cider or delicious fresh seafood. There’s a lively Saturday morning market too.

Lorient close to the coast, is the second most important fishing port of France. It’s quayside is a hive of activity each morning and there are five ports to explore. Great for coastal walks, delicious seafood cuisine, fabulous beaches and the annual Interceltic Festival.

French Connections has loads of fabulous holiday homes in Morbihan and Brittany, head to our home to browse and find your dream holiday home…