What to see and do in Saint-Malo, Brittany 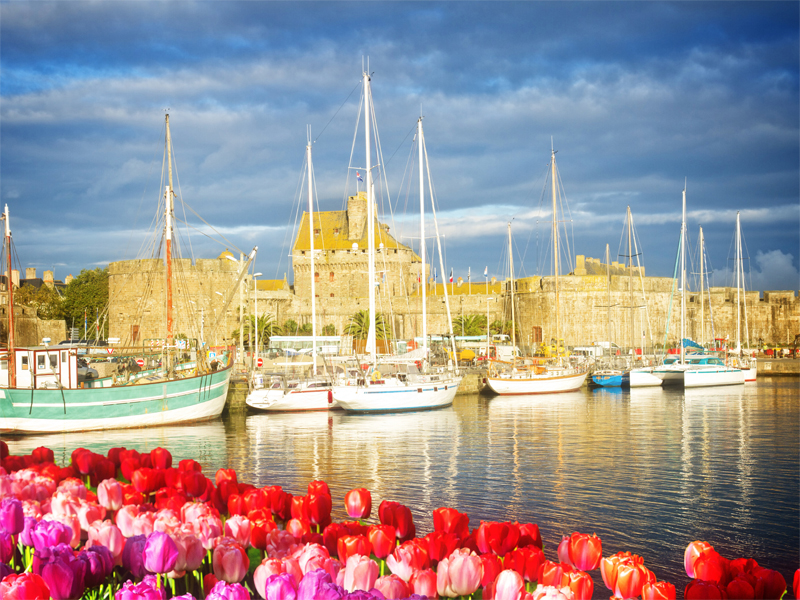 Saint-Malo sits on the Emerald Coast, department of Ille-et-Villaine, Brittany. It’s a port town with ferries crossing from England, Guernsey and Jersey to this gateway to the rest of further afield, but it’s well worth stopping off for in its own right. Channel your inner Jack Sparrow and follow in the footsteps of the famous seafarers and pirates and grab your bucket and spade and head to the beach.

The old town is well preserved with ramparts, cobbled streets and ancient buildings, a great place to wander. Saint-Malo is known as the “town of corsairs”. Corsairs were sailors on a civilian ship officially sanctioned by government to attack enemy ships. A bit like pirates, their targets were mainly commercial ships, except their activities were “legal”. There are several museums in Saint-Malo – including one on a boat.

At the foot of the ramparts visit the Etoile du Roy (Star of the King) ship - and be an honorary Corsair for the day. Etoile du Roy is a replica of a 1745 built frigate. A 3-masted, 47m long boat with 20 cannon guns, on this floating museum you can learn about life on board almost 300 years ago. Great for the whole family.

Meet around 10,000 fish in the Saint-Malo Aquarium. More than 600 species of every shape and colour of fish live here including sharks. Board the ‘Nautibus’ submarine to navigate underwater among 5,000 fish.

Saint-Malo is famous for its spectacular tides, the difference between high and low tides at Saint-Malo is among the largest in the world. There are vast sandy beaches peppered with rock pools. Off the coast there are tiny granite islands including one with a fort.

Fort du Petit Bé was built in the late 17th century and was armed with 15 guns, including two mortars. Climb to the top and you’ll immediately know why this location was chosen, there are wonderful views all round. You can walk out when the tide is low, otherwise a boat ride is necessary.

In the charming cobblestone Rue de l’Orme you will find La Maison du Beurre. Here, Monsieur Bordier sells his world famous butter from a blue painted store front. Since founding his company in 1985, this famous Brittany butter-maker has used a traditional method of kneading butter using a teak frame and wheel. This technique dates from the end of the 19th century and serves to both homogenize and soften the butter. Salt is added by hand and the kneading time is dependent on the season - longer in winter and shorter in summer. The butter reacts to the salt and releases water, prompting locals to say the butter is “crying”. A great take home edible memento if you bring your cool box.

Eating out in Saint-Malo

When you’re in Brittany, it’s pretty much the law to eat crêpes (pancakes) so it’s no surprise to find that Saint-Malo has plenty of delicious creperies. Crêperie La Touline (6 Place de la Poissonnerie) is a quaint little restaurant in the central area; they serve both sweet and savoury buckwheat crêpes and have a small terrace at the front that’s great for people watching. It’s very popular with the locals both for the crêpes and the homemade ice cream. Bouche en Folie (14 rue du Boyer) is a friendly family run restaurant with a superb menu and delicious fresh sea food, and the locals love it!

Four miles north of Saint-Malo in the former fishing village of Rotheneuf, the huge granite cliffs are well worth a detour. In the late 19th century, a priest named Adolphe Julien Foure lived almost as a recluse, after a stroke left him deaf and partially paralyzed, yet he chiselled hundreds of figures into the granite cliffs using only a hammer and chisel. It’s an extraordinary and quite beautiful sight.