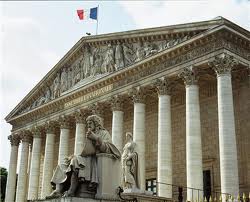 IT'S PRESIDENTIAL election time here in France. Or it will be, in a month or two, but they're gearing up for it already. It's turning into a two-horse race, between François Hollande, the socialist candidate, and Nicolas Sarkozy, the sitting tenant in the Elysée palace. There's a third entry, the National Front's Marine le Pen, but as all candidates have to have a minimum of 500 senators, regional councillors or mayors publicly endorsing their candidatures, a figure Mme le Pen so far falls short of, she may have to scratch from the starting boxes. (If she manages to scrounge the full 500 endorsements, it will make for an interesting race, to say the least.) There's a small tribe of outsiders, the centrist Francis Bayrou, the far-left Jean-Luc Mélenchon, and the Green party candidate, a lady called Eva Joly who wears red-framed glasses and isn't even French, by birth: She's Norwegian.

Whoever gets in, it won't be our fault. Josephine and I aren't entitled to vote. With local and European elections, there's no problem: we can get ourselves down to the village Mairie, select the paper with the name of our preferred candidate pre-printed on it, put it in a little envelope marked République française, pop it in the ballot box (called urne here) and await results, if any. But for government and presidential elections we're obliged to sit at home and suffer the eventual consequences. So we hereby disclaim all responsibility for anything that happens in France over the next few years. Phew. That's a relief. Glad to have got it off my chest.

If we really wanted to vote we could, of course, but we'd have to apply for French citizenship first. Several expats we know have done this, and appear none the worse for it. Five years ago, when the last presidential elections took place, I wrote to ask each of the main political parties how they felt about expats like Josephine and me, fully resident in France and paying French taxes, having the vote. You would have thought that one of the world's most civilised nations, with a long history of democracy and political development, would have heard of the Boston Tea Party and what it represented: no taxation without representation. But it seems not.

The National Front said in no circumstances was giving the vote to foreigners any part of their policy. France was for the French.

No other party troubled to reply.

The National Front reply did however raise the question: who are the French? What does being French mean? Gallons of ink and midnight oil and gigabytes of computer memory have been mostly wasted trying to answer this question, not merely in France but in other nations too. In France there have always been a few unchanging criteria. Ability to speak French to a reasonable degree is one. Knowing something about French history and culture is another. The French equivalent of the Home Office put a sort of qualifying quiz together a month or two ago.

So here we go. How would you fare if you applied for French citizenship? Try the following, and no googling the answers:

1. Brigitte Bardot was: A) a cinema actress B) a fashion house designer C) the first female boxing champion

2. Auguste Rodin was: A) a sculptor B) a politician C) a singer

3. The Three Musketeers is a novel by: A) Alexandre Dumas B) Cardinal Richelieu C) Marcel Proust

4. Which of these three is not a singer: A) Michel Platini B) Charles Trenet C) Claude François

6. Which of these rivers flows in France: A) Loire B) Nile C) Danube

7. Which of these words does not appear in the French national motto: A) independence B) equality C) liberty

8. The seat of the European Parliament is in: A) Strasbourg B) Cracow C) Luxembourg

9. To be entitled to vote at national elections, you must: A) belong to a political party B) pay income tax C) be French

10. The Tour de France is: A) a cycling competition B) a tall building in Nantes C) a national boules competition

11. Which of these countries was never a French colony: A) Libya B) Tunisia C) Morocco

12. The first people to have inhabited France were: A) Gauls B) French C) Cretans

13. A country ruled by a king is a: A) monarchy B) republic C) province

14. In France Catholicism is: A) one of several religions B) the official religion C) forbidden

15. The highest point in France is: A) Mont Blanc B) the Pic de Vignemale C) Kilimanjaro

I don't expect you kept your score, did you? But if you got any Bs, they were wrong. If you're at all clued up about French life and culture, you may have suspected uneasily that all the correct answers were As. And so they are, except for No. 9. And you'd have twigged that the right answer was C.
Which was my point all along.

WE RECENTLY flew to Vienna with Air France, flying Montpellier - Paris - Vienna and return. Apart from Josephine and I setting a world record for transfer on foot between terminals 2F and 2D - we had a really tight schedule - in Charles de Gaulle, that vast labyrinth of air travel, we discovered to our surprise how pleasant old-fashioned flying could be. Of course, cheapo airlines, especially the one that says the same backwards as forwards, have opened up un-dreamed of possibilities for basic air travel all over Europe. But just now and again it's really good to sit in comfortable reserved seats, not to have to walk out in all weathers on to the tarmac to access your plane, free drinks and snacks, not to be bombarded with idiot sales announcements and endless pre-take-off repeats of Mozart's Eine kleine Nachtmusik and boastful early arrival trumpet calls, having ultra-polite cabin crew whose speech you can understand and luggage allowances that mean you can dress well at your destination and even bring a few presents home. And not to have to pay all that much more for the privilege, either.

Bravo, Air France. We'll be back.